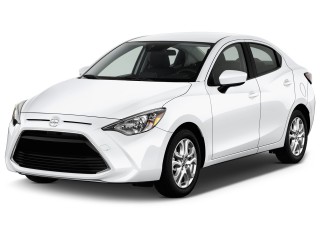 The iA is Scion's first four-door model ever. It's a subcompact sedan competing with the Ford Fiesta, Chevrolet Sonic and Nissan Versa, among others.

The iA arrived on the market as a 2016 model. It's essentially a sedan version of the Mazda 2 hatchback no longer sold in the United States; it's assembled alongside the Mazda in Mexico. The iA will be folded into parent-company Toyota when Scion ends business in the States later this year.

Size-wise, the iA occupies the same space as the xA and xD hatchbacks it succeeds. The iA is a bit more spacious inside, as it’s built on a 101.2-inch wheelbase and is nearly 172 inches long—roughly the same as those rival four-door models, but with enough seating space for five.

As with most sedans this small, the proportions are less than ideal, but they result in a reasonably sized back seat that could be good enough for adults for short stints, as well as a reasonably large trunk (with 60/40-split seatbacks that fold flat when needed).

With a cockpit-like gauge layout and round vents, combined with a horizontal dash and standalone infotainment screen, the iA looks engaging inside, combining the brand's dual missions of sporty cues and driving manners with a focus on individualism, in a well-equipped and feature-oriented small car. Most of the interior is carried over from the Mazda, as is the exterior styling—save for details in the front and rear.

A Mazda 1.5-liter four-cylinder engine provides power, making 106 horsepower and 103 pound-feet of torque, and it’s mated to a choice between a 6-speed manual or 6-speed automatic transmissions. Otherwise, the iA is quite conventionally laid out for a small, economical sedan, with a steel body; struts in front and a torsion-beam suspension in back; and a front-disc, rear-drum brake setup. Yet with a ground-up new design, and engineering done by Mazda, the Scion iA manages a very low curb weight—around 2,400 pounds—which makes it very maneuverable for city driving. Fuel economy ratings are impressive, too, ranging up to 33/42 mpg, city/highway.

The iA starts in the $16,000 range and includes a long list of standard equipment (as is Scion tradition) with no factory options ,but a long list of customization and accessory options available from dealers. Among those standard features are air conditioning, cruise control, keyless entry, push-button start, a rear defogger, tilt/telescopic steering, alloy wheels, and a touch-screen audio system that includes Bluetooth audio and calling plus voice controls and compatibility for several music-streaming apps. The iA will come with a rearview camera as well, plus Scion’s first active-safety system, a low-speed pre-collision system that uses a laser sensor.

Rate and Review your car for The Car Connection! Tell us your own ratings for a vehicle you own. Rate your car on Performance, Safety, Features and more.
Write a Review
2016 Scion iA 4-Door Sedan Automatic (SE)

Inexpensive, but not cheap

Like the expert says, this is a decent starter car for the money. It doesn't play CDs and you probably won't pick up ladies in this thing, it will get you from point A to point B with little hassle. + More »
people found this helpful.
Was this review helpful to you? Yes
2016 Scion iA 4-Door Sedan Automatic (Natl)

Can't wait until this lease is over.. Never again will I purchase anything from Toyota or Scion. Do yourself a favor and keep looking. + More »
people found this helpful.
Was this review helpful to you? Yes
2016 Scion iA 4-Door Sedan Automatic (Natl)

Great riding, comfortable commuter car (only 1 week old) with superior safety features plus a HD radio w/7in display and 6 speakers that no other subcompact car can come close to!