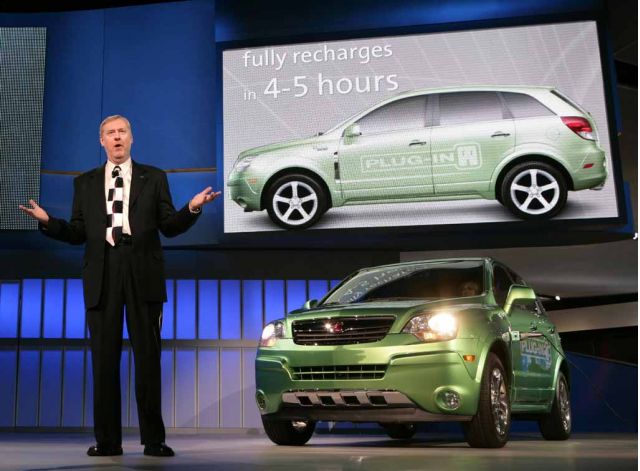 The Saturn Vue was the first crossover utility vehicle from GM's Saturn brand, giving it an entry into the fast-growing segment that essentially replaced wagons in the family market.

The first Vue was uniquely a Saturn design on shared underpinnings, and was built at the brand's Spring Hill, Tennessee, plant from the 2002 through 2007 model years. The second-generation compact crossover, launched as a 2008 model, shared styling and body panels with other GM brands, but only lasted through a small number of 2010 models--though the same vehicle remained in production other under names for markets outside the U.S.

Vue production ended in late 2009, along with the rest of the Saturn lineup, when the brand was killed as part of the bankruptcy and government-backed restructuring of General Motors. Saturn joined HUMMMER, Pontiac, and Saab in the dustbin of history, leaving only its vehicles on used-car lots--and now serviced by Chevrolet-Buick-GMC dealers.

The first-generation Vue had flat, angular styling and the composite body panels that had been one of the defining features of Saturn vehicles since its early-1990s launch. While the mechanical platform was shared with the Chevrolet Equinox crossover, the Vue had four different engines in its six-year life, not all shared.

The Vue Green Line, on the other hand, was the brand's high-fuel-efficiency offering, fitted with a 170-hp 2.4-liter four-cylinder engine and the first generation of GM's Belt-Alternator-Starter (BAS) mild-hybrid system. Introduced for 2007 at a price roughly $2,000 higher than the base Vue, it provided a 20-percent boost in EPA fuel-efficiency ratings. The Vue Green Line was only the second hybrid crossover of any kind on the market (following the 2005 Ford Escape Hybrid). However, a faulty nickel-metal-hydride battery pack in some models led to a 2008 recall and the subsequent replacement of hybrid batteries in about 7,000 models of four different vehicles from Saturn and Chevrolet that used the system, effectively halting sales of the model for a year.

The first-generation Vue sold relatively well, with deliveries between 75,000 and 92,000 every year. It received a minor facelift for the 2006 model year, with revised front styling and some trim changes. Updates included changes to the interior as well, using higher-quality materials and more insulation to reduce noise, vibration, and harshness. OnStar became standard, as did automatic headlights and cruise control.

The second-generation Vue was introduced in 2007 as a 2008 model, with a full run of 2009 models and a small number of 2010s built before production ended. (It returned to the U.S. market for the 2012 model year as the Chevrolet Captiva Sport, a model theoretically sold only to fleet buyers.) It was derived from and very similar to the new-generation Opel Antara in Europe, which was itself designed by GM's Korean Daewoo unit as a global product.

Trim levels started with the XE, moved up to the mid-level XR, and topped out with the performance-oriented Red Line model. Both the Vue XR and Red Line models used the 3.6-liter V-6, but the Red Line featured sportier suspension tuning, lower ride height, larger 18-inch alloy wheels, more aggressive front styling, and various appearance and feature upgrades along with special trim. The Red Line model was not offered for the truncated 2010 model year.

The new Vue received high marks for being much more quiet and refined than its predecessor, handling well, and having a spacious back seat. On the other hand, its front seats were slammed by some reviewers, it didn't offer a telescoping steering column, and the fuel efficiency was nothing to write home about--especially for the two more powerful V-6 engines in this very heavy compact crossover.

The fuel efficiency problem was theoretically addressed by the Vue Green Line model, which also returned for the second generation. It carried over the 170-hp 2.4-liter four-cylinder engine with a retuned Belt-Alternator-Starter (BAS) mild-hybrid system, but retained the old four-speed automatic. In 2009, this model was renamed the Vue Hybrid, dropping the Green Line name.

The Vue Hybrids that never were

The 2009 Saturn Vue had been intended as the first GM front-wheel-drive model to offer a Two-Mode full hybrid option, adapting a system previously used only on GM's full-size sport utilities and pickup trucks. It would have been the most powerful Vue, with 262 hp and 250 lb-ft of torque from a combination of the 3.6-liter V-6 and the complex Two-Mode Hybrid system, and would have been capable of towing 3,500 pounds while still returning fuel efficiency ratings up to one-third higher than the regular V-6 Vue.

The enormously complicated Two-Mode Hybrid system combined two fixed gear sets, two electric motors, three planetary gear sets, and four clutches into a system that could handle the high output of powerful engines. It was reputed to cost GM as much as $10,000 per car.

The 2009 Vue Two-Mode Hybrid came so close to production that several journalists drove pre-production models during fall 2008. It was to have been followed in 2010 by a plug-in Two-Mode Hybrid version, the first plug-in hybrid on the U.S. market. But neither model was ever put on sale at Saturn dealers. If you see a Vue Hybrid with the Two-Mode Hybrid badge--and confirm that it has the V-6 engine and hybrid system--it will be a very rare beast indeed, one that was never meant to have escaped into the wild.

Rate and Review your car for The Car Connection! Tell us your own ratings for a vehicle you own. Rate your car on Performance, Safety, Features and more.
Write a Review
For 2009 Saturn VUE

Nothing electric and I love my 2003 saturn vue

Great drive but not so good on fuel drives nice nice hardly
people found this helpful.
Was this review helpful to you? Yes
For 2009 Saturn VUE

Have not been disappointed!