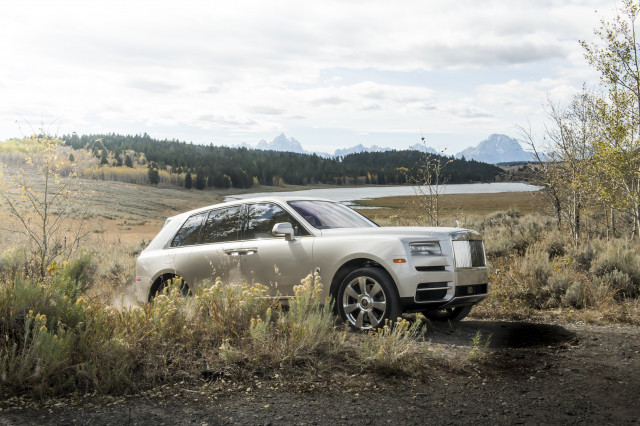 The Rolls-Royce Cullinan joins the ultra-luxury marque’s lineup for the 2019 model year. The first SUV ever built by Rolls-Royce, the Cullinan lays claim to plenty of firsts and bests, with one big most thrown in: at $325,000 in standard trim, it’s the most expensive SUV offered by a mainstream manufacturer.

The Cullinan—yes, it’s named for the 3,107-carat diamond mined in South Africa and sent to the British crown as a colonial spoil—wears an unabashedly grand shape, with an immense grille and a boxy rugged stance that’s unlike that of any other Rolls. Massive 22-inch wheels shore up the Cullinan’s square-rigged roofline, while the rear end’s slight decklid lip lends the SUV a slight resemblance to a classic London taxi. The Cullinan’s interior sports a twin-binnacle dash, wide swaths of digital displays, and somewhat less of the formal wood and chrome trim than in other Rolls-Royces, though they’re certainly available on order.

The first four-wheel-drive Rolls-Royce wagon demands power just to motivate its 5,864-pound curb weight. Wish granted: The Cullinan shares its twin-turbocharged 6.8-liter V-12 with the Phantom sedan. It’s rated at 563 horsepower and 627 pound-feet of torque, and develops peak torque as low as 1,600 rpm. It’s capable of pulling the Cullinan to a 155-mph top speed.

Ride and handling have the task of mating that power to the ground, whether it’s paved or not. To that end the Cullinan has an aluminum body structure, adaptive dampers and a self-leveling air suspension that can lower or raise the vehicle as it courses over pavement, or as it slogs through trenches. The electronically controlled anti-sway bars can push down on a wheel to ensure better grip, and the Cullinan has rear-wheel steering for crisper on-road response at lower speeds.

At 210 inches long, the Rolls-Royce Cullinan is shorter than the Phantom. It seats four or five, depending on whether an executive seating package with a console is fitted to the rear. Rear-seat passengers enter through rear-hinged doors; they’re isolated from the cargo hold by a glass divider.

A Bentley Bentayga or a Range Rover may be a rival for the Cullinan, but those vehicles represent a bargain in contrast to the Cullinan’s base price of $325,000. That’s before owners customize their Rolls SUV with the usual myriad wood, leather, metal, and paint choices.

Be the first one to write a review on 2020 Rolls-Royce Cullinan
Rate and Review your car for The Car Connection! Tell us your own ratings for a vehicle you own. Rate your car on Performance, Safety, Features and more.
Write a Review