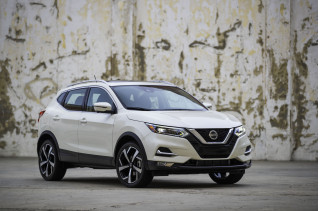 The Nissan Rogue Sport is a compact crossover that's not related to the Rogue, despite its name.

With the Rogue Sport, Nissan is introducing neither an all-new model nor a sportier variant of the current Rogue. Instead, it’s a version of the five-seat Nissan Qashqai ("KASH-kye") sold around the world, updated for North America (but sold in Canada as the Qashqai).

The Rogue Sport is surgical in its size and competitive set. It's bigger than a Chevy Trax but smaller than a Ford Escape, which leaves the small Nissan somewhat between subcompact and compact.

In 2020, Nissan updated the Rogue Sport with standard active safety features at every trim level and new styling. Few changes were made in the 2021 and 2022 model years.

Especially at the front, the Rogue Sport shares some of the larger Rogue’s styling touches, including a V-shaped grille flanked by headlights with standard LED running lights. Base models come with 16-inch steel wheels and hubcaps, but larger alloy wheels are available. The Rogue Sport’s interior is lifted almost wholesale from the larger Rogue, but there’s less rear-seat room and the cargo area is decidedly more compact until the second row of seats is folded.

The Rogue Sport is only offered as a five-seater, which is to be expected from its small size. Its single powertrain pairs a 2.0-liter inline-4 rated at 141 horsepower and 147 pound-feet of torque with a continuously variable transmission. Front-wheel drive is standard, with all-wheel drive available as an option on each of the three trim levels. The handling is average for a small crossover, and acceleration is on the slow side, belying the "Sport" in the model's name.

It’s hardly an off-roader, either, so don’t view it as a replacement for the now-departed Nissan Xterra. Instead, with car-like suspension and a fairly low roof line—the bigger Rogue is fully 6 inches taller—the Rogue Sport is a city-slicker crossover for buyers who want a high seating position and the ability to haul boxier items than will fit into a sedan. All-wheel drive will appeal to those in wintry climates.

For 2018, the Rogue Sport is offered in S, SV, and SL trim levels. All come standard with power windows and locks plus an audio system with Bluetooth streaming and a rearview camera. Higher-spec models gain things like heated front seats, a heated steering wheel, a power driver’s seat, a moonroof, and a premium audio system with a 7.0-inch infotainment touchscreen.

On the safety front, the Rogue Sport is available with a surround-view camera system that displays a 360-degree overview of the vehicle. Additionally, various of the latest active-safety options are available. They include adaptive cruise control, automatic emergency braking with pedestrian detection, forward-collision alert, rear cross-traffic alert, and lane-departure warning. Nissan's full suite of driver-assist features are walled off on top grades.

Rate and Review your car for The Car Connection! Tell us your own ratings for a vehicle you own. Rate your car on Performance, Safety, Features and more.
Write a Review
For 2017 Nissan Rogue Sport

Everything I expected in an AWD and more!

Good value in a delightful auto.

Think before you purchase this vehicle.