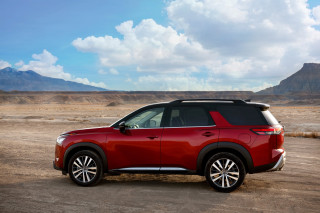 The Nissan Pathfinder is a three-row crossover SUV with seating for up to eight.

Launched in the U.S. in 1987, the Pathfinder led Nissan's utility vehicle lineup as a rough-and-tumble truck-like SUV. The SUV has since softened its ride and expanded its creature comforts to compete against other three-row crossovers from nearly every major automaker, including the Kia Telluride, Honda Pilot, Toyota Highlander, and Ford Explorer.

Redesigned for 2022, the fifth-generation Pathfinder featured a fresh look that blended some of the original's design elements with a much roomier, more versatile interior. The same 284-hp 3.5-liter V-6 as the outgoing model now comes with a 9-speed automatic that can tow up to 6,000 pounds.

The related Infiniti QX60 skews toward luxury, but the Pathfinder relishes in family duty. Nissan once fitted a hybrid powertrain to both crossovers, but it's been discontinued in recent model years.

The redesigned Pathfinder doesn’t find new paths in the crowded three-row crossover field, but it does a good job of hauling up to eight passengers in comfort and towing up to 6,000 pounds. The V-6 engine remains the same, but a new transmission, all-wheel-drive system, and electric steering rack allow drivers to better match the seven available drive modes with conditions on or off road.

With its first new suit in nearly a decade, the Nissan Pathfinder calls on the original for inspiration, with a high vertical face with short overhangs, and a three-slot grille that bridges a flat hood with a broad face.

Inside, Nissan optimized the space of the Pathfinder, which is slightly shorter than the outgoing model but far roomier. It handles up to eight passengers or seven with second-row captain’s chairs. It’s easier to get in and out with second row seats that flip forward with the push of a button to access the third row, and child safety seats can remain intact. Two adults can fit in the third row, and four sets of golf clubs can fit in the 16.6 cubic feet of space behind the third row.

A 9-speed automatic transmission replaces the old CVT and sends power from the 284-hp 3.5-liter V-6 to the front wheels or all four via available all-wheel drive. Seven terrain modes optimize the gearing for the situation. When properly equipped, the Pathfinder can tow up to 6,000 pounds, which is in the higher end for the class. In front- or all-wheel drive, the 2022 Pathfinder tops out at 23 mpg combined.

Nissan equips every 2022 Pathfinder with its front and rear automatic emergency braking, blind-spot monitors, lane-departure warnings, and automatic high beams. Safety options range from a surround-view camera system to adaptive cruise control down to a stop.

Standard features include an 8.0-inch touchscreen with Apple CarPlay and Android Auto compatibility, keyless entry on all four doors, and satellite radio. Pathfinder shoppers can opt up to an available 9.0-inch touchscreen and wireless CarPlay. On Platinum trims, a large 10.8-inch head-up display can project vehicle info out on the road ahead, and a 12.3-inch digital display lights up the instrument cluster. Additional Platinum features include a Bose 13-speaker sound system, navigation, heated second-row seats, panoramic sunroof, and power tailgate.

When that first Pathfinder was launched back in the 1980s, it was a hardscrabble truck model with seating for five in a very basic interior, crude appointments, and a rough ride.

It wasn't until 1996 that it began to take on trappings of passenger friendliness. The previous-generation Pathfinder had been closely related to Nissan's Hardbody compact pickup, but only up until the mid-1990s Pathfinder traded the truck-based body-on-frame design for a new unibody that helped provide better ride and handling—though it still shared a 168-hp, 3.3-liter V-6 with the pickups.

Things changed significantly in 2001 when the Pathfinder got a more modern engine. A 3.5-liter V-6 making 240 hp arrived to solve the power problem. While the Pathfinder was still capable off-road, the Xterra joined it in the Nissan lineup, offering a more rugged alternative to the more-civilized Pathfinder. The Pathfinder retained its ability to tow and its somewhat stiff suspension, however, as well as its tight rear seat.

Redesigned for 2005, the Pathfinder returned to body-on-frame construction that was once again closely related to that of the Frontier pickup as well as the Xterra. A 270-hp, 4.0-liter V-6 was standard, providing plenty of power for most needs, but a 310-hp, 5.6-liter V-8 was optional beginning in 2008. Those tempted by the V-8 in used examples should be forewarned that fuel economy is acutely atrocious with that engine.

That newly optional V-8 was accompanied by a design overhaul for the 2008 model year. Nissan gave the Pathfinder's front end a slight visual adjustment and made upgrades to the interior that year. The crossover saw few big changes through the 2012 model year, though the lineup did include SE Off-Road models in 2008 and 2009 with features aimed at trail enthusiasts, including a skid-plate package, off-road tires, and longer-travel Bilstein dampers.

The 2013 Pathfinder was a more car-like crossover vehicle than it had been in the past. Related to the Nissan Murano, it was powered by a 3.5-liter V-6 engine and continuously variable transmission (CVT) with standard front-wheel drive or optional all-wheel drive. The latest Pathfinder traded the earlier models' towing and off-roading abilities for on-road ride and comfort, versatility, and seating space for seven.

A Pathfinder Hybrid crossover was added to Nissan's lineup for the 2014 model year, though it lasted only one year. The V-6 found in other versions was replaced in the Hybrid by a supercharged 2.5-liter 4-cylinder and an 15-kilowatt (22 hp) electric motor. The motor was located between a modified CVT and the engine, and the two power sources combined for a net of 250 hp.

For the 2015 model year, Nissan made only a few minor changes to the Pathfinder, dropping the Hybrid model, updating the CVT with stepped gear ratios, and shuffling equipment.

For 2016, it also received very minor changes, including a standard heated steering wheel on the SL model and a revised Almond interior color with black and beige contrasting materials.

Rate and Review your car for The Car Connection! Tell us your own ratings for a vehicle you own. Rate your car on Performance, Safety, Features and more.
Write a Review
2016 Nissan Pathfinder 2WD 4-Door SV

I love everything about this car.

Interior and exterior are quality workmanship. Seats are comfortable, quality leather, with great stitching. Performance and handling are outstanding! In short, I love everything about it.
people found this helpful.
Was this review helpful to you? Yes
2015 Nissan Pathfinder 4WD 4-Door SL

2022
Nominated for Best Car For Families
See the winner »
2022
The Car Connection
See The Winner and Nominees »
6.8
Expert Rating
Most Recent Rating
Ready to connect with local dealers?
Get Your Price