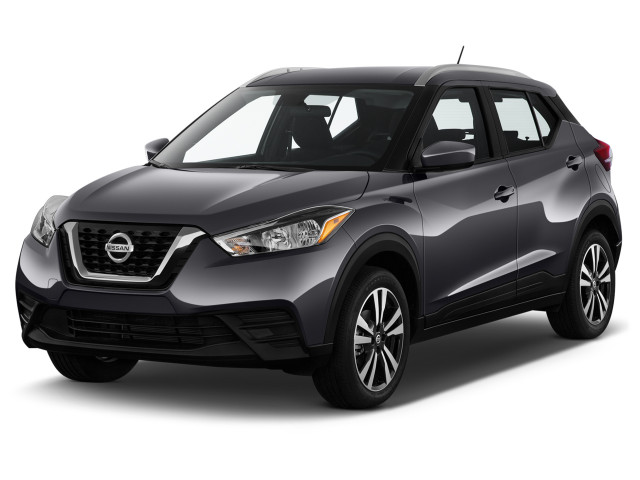 The Nissan Kicks is a stylish subcompact crossover that was new in North America in 2018. It's based on the Nissan Versa sedan and shares much of its running gear. The Kicks is available in S, SV, and SR trim levels.

With the Kicks, Nissan has a rival for subcompact SUVs such as the Chevy Trax, Hyundai Venue, Ford EcoSport, and Honda HR-V.

For 2021, Nissan refreshed the Kicks with a double-breasted V-shaped grille flanked by new fog light mounts, and a new rear bumper. The interior featured a shared armrest that doubles as a center console storage area, and new door trim panels and circular outboard vents added some flair. In addition to the standard safety gear added in 2020, every Kicks comes with Apple CarPlay and Android Auto compatibility.

Though it lacks the polarizing visual flair of the Nissan Juke, the Kicks isn't short on stylistic personality. Its most distinctive feature is its side profile, with a rearmost roof pillar that kicks (see what we did there?) upward and is painted black to give the illusion of a floating roof. Unpainted lower bumpers hint at off-roady ruggedness, but the Kicks isn't available with all-wheel drive—it's front-wheel drive for now. Despite its relatively short stature, Nissan says that a 6-footer can easily load and unload the Kicks without ducking underneath the rear hatch.

Under its hood sits a 1.6-liter inline-4 rated at 125 horsepower and 115 pound-feet of torque that sends power to the front wheels via a continuously variable automatic transmission. The combo should net 33 mpg combined, according to the automaker. That's hardly thrilling power on paper, but the Kicks is intended more for around-town cruising with its 169-inch overall length than it is for corner carving. Its 2,600-pound curb weight and a touchy throttle mean it feels peppier around town than it is.

The Kicks sports a relatively large interior for its class, including more than 25 cubic feet of cargo room with the second row in place. Second-row passengers get more than 33 inches of leg room, which is better than some in its class.

The Kicks comes unusually well-equipped with safety gear for a subcompact crossover. Automatic emergency braking is standard across the line, while blind-spot monitors are included on SV and SR trim levels. Power windows and locks are standard. All trims come with a 7.0-inch touchscreen infotainment system, but only SV and SRs are fitted with Apple CarPlay and Android Auto. Bose speakers and heated seats are optional. The Kicks SR is mostly an appearance package with black-painted accents outside, although it does add a leather-wrapped steering wheel and heated exterior mirrors.

The North American version of the Nissan Kicks will be assembled at Nissan's factory in Mexico.

Rate and Review your car for The Car Connection! Tell us your own ratings for a vehicle you own. Rate your car on Performance, Safety, Features and more.
Write a Review
For 2020 Nissan Kicks