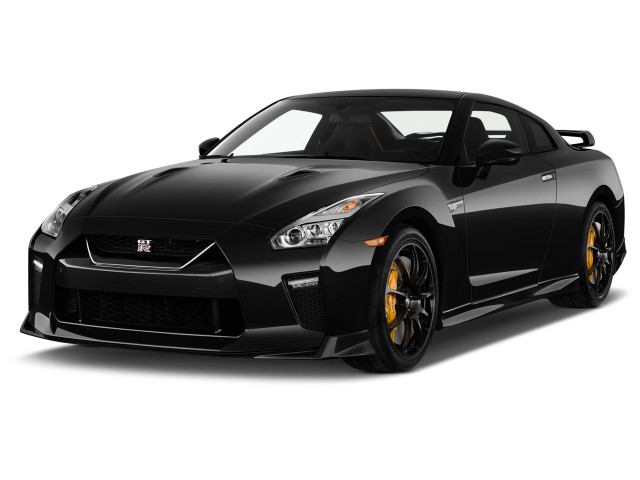 The Nissan GT-R is a four-seater sports car that's almost impossibly fast. Powered by a twin-turbo V-6 and all-wheel drive the GT-R offers superlative grip and performance, a rival for cars that cost twice its price.

The so-called GT-R R35 generation made its debut in 2007, but we received it in the United States for the 2009 model year.

With the GT-R, Nissan has a contender for the Chevrolet Corvette and Porsche 911—even some supercars including the Audi R8. Although its price has risen since its introduction, the GT-R is a relatively affordable supercar when its performance is considered.

The GT-R draws on a heritage of performance from a long line of Japanese-market Nissan Skyline sport coupes, not all of which were top-shelf sports cars. Today, just a quick look at the GT-R's spec sheet is enough to see that it qualifies as a supercar. It has a 3.8-liter twin-turbo V-6, now making 565 horsepower (up from 473 hp at its introduction) and 467 pound-feet of torque, and its unique design features the engine in front, the transmission in back, and all-wheel drive to put all that power to the road.

From behind the wheel, the GT-R delivers dizzying acceleration, including 0-60 times of under 3 seconds and a top speed upward of 193 mph. Shifting is handled by a dual-clutch, automated manual gearbox. In normal driving, it's hard to scratch the surface of the GT-R's performance potential, but once on a tight road or a racetrack the combination of the immense power and sophisticated all-wheel-drive components brings a video-game-like experience—the car manages things that seem impossible, creating a surreal feeling of detachment for the driver. That said, handling is excellent and the variable power-split all-wheel-drive system not only makes the car fast, but also safe and easy to operate.

The GT-R's shape is nowhere near as exotic as those of most of its competitors; Nissan's all-wheel-drive coupe can appear downright blocky and chunky from afar. Once you approach, however, you start to see the details, like its cantilevered roofline, big rear wing, and iconic circular taillights. Inside the GT-R, there's a very driver-focused feel, something different from all other Nissan products, with a center screen designed and programmed with help from video game makers.

After its release in the U.S., Nissan updated the GT-R nearly every year, especially in the performance department. The 2010 model year brought a brake upgrade that consisted of more rigid lines, and there was an update to the stability-control programming. A Cold Weather package, an iPod interface, and forged RAYS wheels with a smoked finish were added as well. There were two trim levels for 2012, base and Premium, with the more expensive one including upgraded Bose audio and heated seats.

Nissan discontinued the Launch Control feature early on due to excessive warranty claims. Since launch control had helped yield the GT-R's excellent acceleration times—with some testers saying the GT-R was a second or more slower to 60 mph without it—Nissan restored it in a limited way for the 2012 model year, while it also boosted total output to 530 hp. Those changes brought the supercar's 60-mph runs down to about three seconds, according to buff-book numbers. Other changes for the 2012 model year included a special Black Edition and revised interior trim.

Nissan brought a more extensive round of improvements for 2014. In addition to some structural reinforcements, the new GT-R got revised suspension mounts that lowered its center of mass. A special Track Edition was also offered. Peak output for the engine remained at 545 hp and 463 lb-ft, though mid-range response was improved with high-output fuel injectors and revised turbochargers. Pricing rose to a base of $99,590.

The 2015 Nissan GT-R brought the Nismo edition to reality, turning the wick up to 600 hp and 480 lb-ft, and setting a new GT-R Nürburgring lap record along the way. A Premium model offered slightly tamer performance with more focus on refinement and luxury, with the base price rising to $101,770, and there was also a GT-R Black Edition. The standard models received some updates, including new LED headlights, a Bose noise-canceling system to reduce engine booming, additional sound insulation, retuned shocks and chassis elements, and a Premium Interior package for the Premium model.

For 2016, the GT-R Premium model got new 20-inch Rays wheels. Nissan also offered a limited run of 45th-anniversary GT-Rs in the U.S.; the model was previously announced for Japan only. Fewer than 30 of the 45th Anniversary Gold Edition cars were imported, at a price of $102,770, and they all came with special gold paint, a gold-tone VIN plate in the engine compartment, and a commemorative plaque on the center console.

The 2017 Nissan GT-R went on sale in 2016 after extensive changes, including 20 more horsepower, an extensively revised suspension tuning, an updated interior, a new infotainment system, and styling tweaks front and rear. It's expected to be the last major update for the GT-R before the all-new R36 model arrives, currently thought to be sometime around 2018.

The most noticeable exterior changes were to the front end, which got a new mesh grille and a matte finish. The revised front lip spoiler and bumper design added downforce, and the hood had more pronounced character lines. Along the sides, the sills were pushed outward to improve airflow and the 20-inch wheels featured a new 15-spoke design. The rear end got new bodywork, with functional vents next to the quad exhaust tips. Nissan said these changes make the car more stable at high speeds while maintaining the same 0.26 coefficient of drag. A new Blaze Metallic orange color was added to the color palette.

The changes inside included a new dashboard, with an emphasis on a horizontal layout and an instrument panel wrapped in nappa leather. An 8.0-inch touchscreen replaced a 7.0-inch unit, and the number of knobs and switches fell from 27 to 11. A Display Command controller was added to the center console, and the car got the NissanConnect system with navigation and access to mobile apps. The seats became lighter thanks to a new construction technique. The shift paddles also moved from the steering column to the steering wheel.

In addition to the new interior look, the 2017 GT-R grew quieter inside thanks to more sound deadener and an acoustic glass windshield. The Premium Edition model also added Rakuda Tan to its list of color choices.

Nissan also borrowed the GT-R name for its oddball Le Mans racer, the GT-R LM Nismo. This unconventional machine used front-wheel drive with monstrous tires in front and also benefited from a hybrid flywheel that could send power to both the front and rear axles. Its 3.0-liter twin-turbo V-6 engine was a relative of the street GT-R's. Unfortunately, that car lasted only one rather unsuccessful race season.

Rate and Review your car for The Car Connection! Tell us your own ratings for a vehicle you own. Rate your car on Performance, Safety, Features and more.
Write a Review
For 2016 Nissan GT-R

I dont know how nissan make this car i had never seen a performance like this car, this my dream car
people found this helpful.
Was this review helpful to you? Yes
For 2013 Nissan GT-R

I drove Porsches for years and I admit I miss them, but the GTR performance is unparalleled up to the turbos.