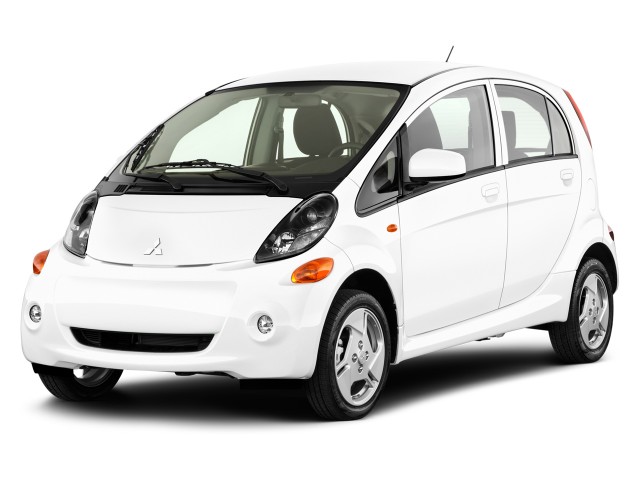 The Mitsubishi i-MiEV is a small hatchback electric car. Offered on and off for sale since 2012, the i-MiEV can travel up to 62 miles on a full charge with its electric powertrain.

With the i-MiEV, Mitsubishi has a subcompact hatchback far smaller than a new Mini Cooper. In short, with the iMiEV, Mitsubishi has made has a lot of inherent design choices that limit its appeal. The i-MiEV is based on a Japanese-market "Kei" car designed for use on, for instance, Tokyo's ultra-narrow streets. That makes it a rather odd fit in the United States, where higher speeds and larger vehicles are the norm.

The i-MiEV competes with the handful of battery-electric vehicles now sold in the U.S., most notably the Nissan Leaf and Tesla Model S, both larger and pricier (considerably so in the case of the Tesla luxury sport sedan). That set doesn't include so-called compliance cars—sold only in California and a few other locations to meet zero-emission vehicle sales requirements—such as the Chevrolet Spark EV, Fiat 500e, and Ford Focus Electric.

For 2017, the i-MiEV returns unchanged after some minor revisions last year. Slow sales prompted Mitsubishi to pull the i-MiEV entirely in 2015.

Just one option package is available on the i-MiEV, a combination of a navigation system, rearview camera, and Bluetooth connectivity.

Mitsubishi's little i-MiEV was adapted from a Japanese minicar called the Mitsubishi i. Its rear-mounted gasoline engine has been replaced with a 49-kw (66-horsepower) electric motor that produces 147 pound-feet of torque, powered by a 16-kwh lithium-ion battery pack. The electric version of the "i" weighs almost 2,600 pounds. A full recharge takes seven hours with the Mitsubishi-approved Eaton 220V charger, installed by Best Buy, or up to up to 22.5 hours on a standard 110V household plug.

We've found the Mitsubishi i-MiEV to serve best as a low-speed city car. While it steps away from traffic lights quicker than some gasoline-powered small cars, it leaves its comfort zone on the highway, feeling sluggish at 55 mph and above. Those speeds also cut driving range significantly from the EPA estimate of 62 miles.

Back in the city, its personality is enhanced by excellent steering and great maneuverability—although a soft suspension calibration means that you'll never mistake the i for any kind of hot hatch. Gentle, lower-speed driving makes the 62-mile range realistic on a full charge—although by using the "Eco" or "B" settings on the shift lever, you can take better advantage of the regenerative brakes and recapture more of the energy otherwise lost in stop-and-go.

Where some EV makers have gone the complex and showy route when it comes to interfaces and controls, Mitsubishi went with simplicity. The vehicle is turned on by a traditional-looking key, there's a shifter that slots into gear, and only a basic trip meter in an LCD gauge to show the estimated remaining range.

Because of its rear-mounted motor and non-traditional profile, the i-MiEV offers a surprising amount of interior room. The Americanized version is also wider than the Japanese car it's based on, allowing four adults to fit pretty comfortably inside. The rear seatbacks are split down the middle and fold to allow more cargo room. It's pleasant, although the trim and upholstery show signs of cost-cutting. The i-MiEV's ride is pretty good and the interior is quiet thanks to the electric powertrain.

Features are quite basic, although remote setting of climate control and charging operation are provided via the keyfob. Options include a heated driver's seat; an eight-speaker, 360-watt sound system; and an in-dash navigation system.

Mitsubishi skipped the 2013 model year for its electric car and brought the i-MiEV back for 2014 with a price cut. The new sum was just $22,995 before incentives, a $6,130 reduction which Mitsu hoped would make it more competitive with the larger Nissan Leaf (which starts at $28,800).

The i-MiEV took the 2015 model year off as well. It's likely that dealers had sufficient supply of the little EV so as to not warrant continued production. Mitsubishi only sold a couple hundred of the cars in 2014, compared to a little over a thousand in 2013. The i-MiEV returned in early 2015 as a 2016 model, with the same (pre-tax-credit) base price of $22,995 and a newly optional navigation package.

Like all battery-electric cars, the i-MiEV is eligible for a $7,500 federal income-tax credit, along with a variety of local and state incentives. In California, those include single-occupant access to the carpool lane and a $2,500 purchase rebate. If considering an EV, it's best to research any similar incentives when pricing out the vehicle.

Rate and Review your car for The Car Connection! Tell us your own ratings for a vehicle you own. Rate your car on Performance, Safety, Features and more.
Write a Review
2017 Mitsubishi i-MiEV ES Automatic

Like all electrics it has great acceleration, even at highway speed although it's not exactly a freeway vehicle. And at 120KPH it burns through the battery power pretty quickly. The regenerative braking is really good, both helping range and reducing brake wear. There are times when I'd like more range for road trips but for my use it's no problem. + More »
people found this helpful.
Was this review helpful to you? Yes
2016 Mitsubishi i-MiEV 4-Door HB ES

Great little car...does EXACTLY what I bought it to do.

MeVee has plenty of cargo space for what I need. I have bought a lawn mower, patio chairs, and a shed (in a flat box) from Lowe's and gotten them all home, without difficulty, in this "little giant".

I've gotten more compliments on the car (from women) than I did when I had my '65 Mustang. It is basic, it is reliable, it is fun to drive, and I don't worry that gas prices go up 15 cents over night. + More »
people found this helpful.
Was this review helpful to you? Yes
See More Reviews