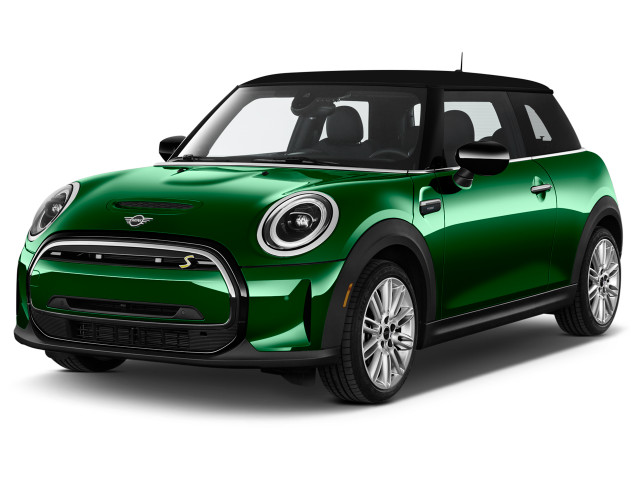 The Mini Cooper compact hatchback was made famous with the original 1960s Mini, penned by Alec Issigonis, and revived in 2002 under its latest owners.

Since its revival, the BMW-owned Mini brand has expanded from its three-door hatchback original to encompass a five-door hatchback, a convertible, an unusual small wagon called the Clubman, its largest offering in the crossover Countryman, and for a time, two-seat Coupe and Roadster models. Each model has been offered in Cooper, Cooper S, and John Cooper Works version, which emphasizes performance.

With the Cooper, Mini has a compact car with plenty of performance and luxury fittings—for a price. Although its price is relatively low in base models, Mini takes the luxury-automaker's route in charging for myriad options that can push the hatchback's price sky high.

Its rivals include the Volkswagen GTI, Audi A3, and the Mazda 3.

For 2022, Mini revamped the Cooper's front end, and fitted a standard 8.8-inch touchscreen to the interior.

Mini brought back the 6-speed manual transmission for 2021, expanded the Oxford Edition to across the lineup, and returned the Sidewalk Edition to the convertible.

The three-door hatchback, by far the most recognizable, was the first Mini Cooper offered in a new and redesigned generation for the 2014 model year. It was followed by a new five-door hatchback for the 2015 model year. The convertible model followed halfway through the 2016 model year, a couple of months behind the Clubman edition.

The new Mini Cooper 2-door Hardtop, as the hatchback is known, is larger than either of the two previous generations—especially in the nose, which is visually longer and consequently alters the proportions of the whole car. It's larger in every dimension, though, including passenger volume and cargo space, but it's still both recognizably a Mini and substantially smaller than most other cars on the road. Performance specs for the five-door hatchback and Clubman follow the same pattern.

Base versions of the Mini Cooper hardtop use a new turbocharged 3-cylinder engine that displaces 1.5 liters and puts out 134 horsepower. The higher-performance Cooper S variant sticks with a turbocharged inline-4, this one at 2.0 liters and making 189 hp. Either engine can be had with a 7-speed dual-clutch automatic transmission. The 6-speed manual was not being offered in the U.S. for the 2020 model, though Mini said it was delayed, not discontinued. While the auto is fine, we have preferred the manual, as it's better fitting with the Mini's spunky nature.

EPA-rated gas mileage sees a boost in this generation despite the size increase, with the most efficient gas model Cooper 2-door Hardtop seeing 36 mpg on the highway; the Cooper S variant is 35 mpg highway.

The handling remains flat and stick-to-the-road sharp, with better power steering and a tighter body structure adding comfort and security—not to mention all the latest modern safety features, whether standard or optional. Either engine is fun to drive, though we felt the 3-cylinder's distinctive exhaust note gave the new Mini more personality. Except for sheer straight-line acceleration, where the Cooper S triumphs, either car delivers satisfying driving in a stylish package that remains as cheerful as the very first 1959 Mini.

Mini began selling a new five-door Cooper hardtop here—officially, it's being called the hardtop four-door—in 2015. The engine specs are the same as with the three-door Cooper and Cooper S. The Clubman joined the lineup for 2016, with four doors and a pair of barn-style doors at the back. The subcompact crossover is roughly the same size as a five-door VW Golf. The Mini Countryman, however, is the largest Mini.

The John Cooper Works model returned to the lineup for 2015. Mini offered it first on the two-door, with the four-door to follow. The JCW is powered by a 228-hp turbocharged 4-cylinder and is available with either a manual transmission or an 8-speed automatic, the first time an autobox has been offered on any JCW model aside from the Countryman.

For 2016, the Mini lineup has been pared down to the hatchbacks, the Convertible and Clubman. The Coupe and Roadster? They've been discontinued.

For 2017, the Cooper carried on largely unchanged. In 2018, Mini added a standard rearview camera and shuffled its optional packages accordingly. For 2020, Mini added standard active safety features and LED lighting to all models, and no longer offered a manual transmission.

The Mini is quite possibly the best-known British volume car in the world. The original 1959 model pioneered the front-wheel-drive “econobox” formula, with a transverse front-engine layout that has since become the standard layout for small cars. Small numbers were sold in the U.S. through 1967, and in Canada into the 1980s.

BMW acquired the rights to the brand and capitalized it to emphasize its new beginning in 2002. Then it introduced a new and larger Mini Cooper that proved even U.S. drivers would purchase premium-priced small cars, if they offered style, power, sporty handling, and good perceived value for money.

The first generation of the new Mini Cooper, sold from 2002 to 2006, was the first Mini sold in the States since 1967. Unlike its U.K. home market, which included an ultra-fuel-efficient Mini One model, it was only offered here in sporting Cooper trim and two model variations: The standard Mini Cooper, with a 115-horsepower, 1.6-liter engine, and the Mini Cooper “S”, with a 168-hp supercharged version of the same engine. A convertible was added for 2005. A 5-speed manual gearbox was standard, and a continuously variable transmission (CVT) served the function of an automatic.

Completely redesigned for 2007 (the Convertible followed in 2008), the second-generation Mini Cooper closely resembled the earlier model but offered a number of feature and safety refinements. That MINI introduced a new 120-hp, 1.6-liter engine, which in the “S” model received a turbocharger that took its power up to 175 hp. A 6-speed manual was standard, with a 6-speed automatic optional. A high-performance John Cooper Works model was also available.

For 2011, the Cooper range was upgraded to 121 hp in base models through reduced internal engine friction, while the Cooper S increased to 181 hp with additional tuning. The John Cooper Works models from 2011 rated 208 hp, and include an upgraded suspension and unique appearance items. Other updates for the 2011 and 2012 model years include freshened exterior appearance elements including a new bumper, a new set of interior and exterior customization options, and, for 2012, a new MINI Yours personalization program.

A Clubman model, with a longer body and an unusual door arrangement (with a second rear-hinged door on the passenger side) joined the lineup, and in 2012, a new two-seat Coupe model was added. Soon after, a convertible version of the Coupe, dubbed the Roadster, was added as well.

Rate and Review your car for The Car Connection! Tell us your own ratings for a vehicle you own. Rate your car on Performance, Safety, Features and more.
Write a Review
For 2017 MINI Cooper

This is my fourth Mini so you can guess how I feel about Mini Coopers!! I even owned the coupe and loved it! Although I'm a "senior" I feel so much cooler than my friends stuck with their SUV's and big sedans!!
people found this helpful.
Was this review helpful to you? Yes
2015 MINI Cooper 2-Door John Cooper Works

This car is very engaging and fun!

It's 3 cylinder turbo charged engine can either sip gas at 41 MPG (Green Mode) or go like a rocket with a 0-60 in about 7 seconds (Sport Mode) Its tight suspension and wheels pushed to the extreme corners make it drive like a fun go-kart.

Styling is unquestionably unique and is nor mistaken for all the other "angry European or Japanese" models out there. This is a happy fun car inside and out.

The interior is as much to be in as it is to drive. The large round center mounted information display is packed with all kinds of great stuff from navigation to SIRI voice interface - yes, I can text and drive by speaking and listening through SIRI with the steering wheel controls.

The interior lighting is a MINI unique feature that can either reflect the action of driving or provide mood lighting.

I could go on and I about all the fun I have and enjoy about my MINI, but you should get to a MINI Dealership and go see and test drive one for yourself!
+ More »
people found this helpful.
Was this review helpful to you? Yes
See More Reviews