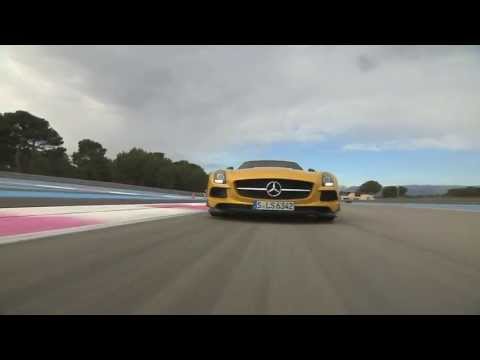 The Mercedes-Benz SLS AMG GT is offered as either a two-seat soft-top roadster or "gullwing" coupe supercar. Straddling the line between supercar and sports car, the SLS is responsible for keeping the brand's gullwing history current, as well as trailblazing the future of super cars, like the 740-horsepower battery-powered Electric Drive model.

Like most supercars, the SLS AMG is born from a unique and bespoke platform, and in this case was gilded by the tuning gods at AMG, the official in-house tuner of Mercedes-Benz and the company responsible for its fastest models. Unofficially, it's the evolution of where the Viper would have gone, had DaimlerChrysler remained just that.

The SLS AMG GT offers copious amounts of power and torque, a heady 563 horsepower and 479 pound-feet of torque, all of which is generated by a naturally-aspirated 6.2-liter V-8 engine.

Many supercars make or exceed that power output, but the SLS is unique in that it features a pair of ‘gullwing’ doors, making it a genuine successor to the legendary 300SL launched more than half a century ago. And, like the original 300SL, the SLS AMG is also available as a convertible.

The SLS AMG is also the type of car an automaker builds when it wants to spare no expense. And considering that it’s Mercedes-Benz sparing no expense, you’ll be hard-pressed to find something more purposeful and luxurious this side of half a million dollars. We’re talking about things like a space-frame chassis composed of lightweight aluminum, a hand-built engine and seven-speed dual-clutch transmission mounted at the rear to help provide a near-ideal 47-53 front-rear weight ratio.

Weighing in at a tad over 3,500 pounds, the SLS AMG will hit 60 mph from rest in just 3.7 seconds, going all the way to 197 mph before hitting its electronic speed limiter.  This puts the SLS AMG in direct competition with cars like the Audi R8, Porsche 911 and Maserati GranTurismo. However, anyone considering exotics like the Ferrari California or Lamborghini Gallardo should also consider the SLS AMG.

The car isn’t without its faults, albeit they are minor ones. The SLS AMG is big for a two-seater sports car, which means it may not feel as nimble as some of the competition. And despite its size the car’s rather tight in its beautifully-appointed cabin. Taller drivers may finding it a bit short on head and leg room. That’s partially due to the gullwing doors, which also require relatively tall sills that make getting in and out harder than it should be. Opting for the soft-top convertible alleviates some of the claustrophobic feeling.

The SLS AMG was new for 2011 so there weren't many major updates on the gullwing for 2012. However, the 2012 model year introduced the SLS AMG Roadster as well as some new paint colors and an optional three-mode AMG Adaptive Suspension.

For 2013, the SLS AMG GT came along, sporting a rise of 20 horsepower, a retuned transmission, and sharper suspension settings. The 2014 model year saw the arrival of the SLS AMG Black Series, the most hair-on-fire SLS yet, good for a whopping 631 horsepower. Wearing aggressive aerodynamic additions all over, the SLS AMG Black Series has significant amounts of carbon fiber in its body structure as well as a custom interior and the limited-edition status that comes with all Black Series models.

And at the far end of the tech horizon, there's the SLS AMG Electric Drive, a pure EV based on the SLS AMG body, but gutted of its gas running gear and fitted with a brand-new set of electric motors and a massive battery pack. Capable of performance like that of the base SLS AMG, the Electric Drive has an 864-cell, 60 kilowatt-hour, 1208-pound lithium-ion battery pack running down the car's spine, along with a quartet of inboard electric motors that provide direct all-wheel-drive control of each wheel. The net: 740 horsepower, and a 0-60 mph time of 3.6 seconds.

The SLS AMG's 2015 model year would be its last. For a limited 350-unit Final Edition, some special colors and accents are added to the sleek, low-slung, cab-rearward proportions--and of course, the iconic gullwing doors. Final Edition models get a "carbon fiber effect" hood in black, a carbon fiber front splitter, a fixed rear wing, and exclusive alloy wheels. The air inlets in the front bumper are also slightly tweaked for Final Edition models.

Be the first one to write a review on 2015 Mercedes-Benz SLS AMG
Rate and Review your car for The Car Connection! Tell us your own ratings for a vehicle you own. Rate your car on Performance, Safety, Features and more.
Write a Review