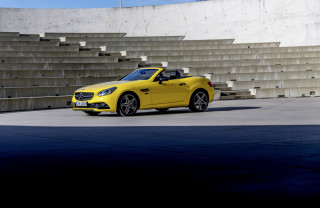 The Mercedes-Benz SLC-Class is a luxury two-seat hardtop convertible that's relatively old among Mercedes-Benz vehicles and is due for a replacement soon.

Mercedes offers the SLC300, powered by a turbo-4 engine, and the AMG SLC43, which sports a twin-turbo V-6.

Even with a new name, the SLC has the same mission: sporty convertible without treading to heavily into sports-car territory. More performance would likely require a Porsche 718 Boxster or Cayman, or perhaps an Audi TT S or TT RS.

For the 2017 model year, the SLC adopted a new front end with smoother, more handsome styling with a chrome or black-finished grille. The silhouette remained the same, with a wedgy body, a rising beltline, and LED tail lamps giving the roadster a sporty profile.

Under the hood, drivers are offered a choice between two powertrains for the rear-drive SLC. The base engine is a turbocharged 2.0-liter inline-4 with 241 horsepower and 273 pound-feet of torque; Mercedes says it's good for a 0-60 mph time of 5.7 seconds when coupled to the standard 9-speed automatic transmission. In the AMG SLC43, a twin-turbo 3.0-liter V-6 makes 385 hp, good for 0-60 mph times of 4.6 seconds. Shifting also is handled by a 9-speed automatic. Both models offer five driver-selectable performance modes: Eco, Comfort, Sport, Sport+, and Individual.

A power-folding hardtop is a big selling point for the SLC. In this application, the retractable roof can be raised or lowered at speeds of up to 25 mph. When it's raised, the SLC feels solid and coupe-like; with the top down and a mesh windblocker in place, turbulence is kept to a minimum. The cockpit is kept warm even in cooler months with Airscarf, which puts warm-air vents at the passengers' necks. Finally, the hardtop comes with a panoramic glass panel that can be equipped with auto-dimming glass.

It's finely appointed, but the SLC's interior is a bit snug for tall drivers, and not too generously sized for trunk-stored luggage. A rearview camera, forward-collision warning system with automatic braking are all standard. Other standard features include Bluetooth, navigation, HD radio, and real-time traffic.

Before it was the SLC-Class, the smaller Mercedes roadster was dubbed the SLK. Introduced in the 1996 model year, it was part of a large expansion of the German automaker's product portfolio, and was pitched as the smaller, lighter, and shorter cousin to the SL-Class—sportlich, leicht, und kurz, or "s-l-k."

In its first generation, the SLK was offered with a wide range of powertrains, from a supercharged 4-cylinder engine to a potent AMG-built V-8. It was 4-cylinders only at launch, but in 2001 a 3.2-liter V-6 was added to the lineup. A supercharged V-6 came in 2001 as well, which pushed the AMG edition to 354 hp.

The second-generation SLK arrived in 2005. It bore a much more masculine shape, and powertrains ranged from 4-cylinders to new V-8 engines, all much more powerful than before. Base U.S.-market cars came equipped with a 228-hp, 3.0-liter V-6, with a 300-hp, 3.5-liter V-6 in the middle of the range. An AMG edition came with a 355-hp, 5.5-liter V-8. A 2009 update gave this SLK some minor styling updates and a Black Series edition for the AMG model.

A manual transmission was offered on the first three generations of SLKs, but you're far more likely to find an automatic.

In 2012, the third-generation SLK bowed. At first it was offered with a 302-hp 3.5-liter V-6, but a turbocharged 1.8-liter 4-cylinder was added. For a time, it was the only Mercedes offered in the U.S. with a manual transmission. (A 7-speed automatic was otherwise fitted to non-AMG models.) An SLK with an AMG V-8 was again added to the lineup. This SLK offered more interior space and a more refined hardtop with photochromic glass and Airscarf.

Be the first one to write a review on 2020 Mercedes-Benz SLC Class
Rate and Review your car for The Car Connection! Tell us your own ratings for a vehicle you own. Rate your car on Performance, Safety, Features and more.
Write a Review