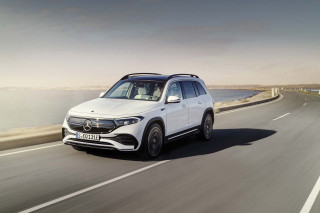 The Mercedes-Benz EQB is a fully electric compact crossover SUV that stands out in this class for its available third-row seat.

At an overall length of about 184 inches, the EQB fits in against rivals including the Audi Q4, Genesis GV60, Jaguar I-Pace, and Tesla Model Y.

Compared to any of those models, the EQS is a standout for its boxy shape, which helps accommodate that extra way-back space for up to seven (the mounting points for two more child seats). That makes it an alternative to much larger SUVs—and the only electric SUV with three rows of seating other than the Tesla Model Y and Rivian R1S.

The EQB is built on the same platform as the Mercedes GLA and Mercedes GLB small crossovers, and from some angles—like the side—it’s a near doppelganger for the gasoline GLB. However the EQB’s cleaner front and rear styling—and smooth underbody—result in a 0.28 coefficient of drag, which helps add to efficiency and reduce wind noise.

Two different models of the EQB are offered, the Mercedes-Benz EQB 300 4Matic and EQB350 4Matic. Both have dual-motor all-wheel drive and a 70.5-kwh battery pack, and the differences between the two come down to power. The EQB 300 makes a combined 225 hp and 258 lb-ft of torque, while the EQB 350 delivers 288 hp and 384 lb-ft. That means a 0-60 mph time of less than eight seconds for the former or around six seconds for the latter. Range, not yet released at the time of writing, is expected to be well over 200 miles for both models.

To make the most of the GLB body in EV form, Mercedes flattened the floor to help maximize space inside. The third row folds flush into the floor and the second-row seatbacks fold forward flat. Front seats have better back support than most EVs this size, and ride quality is plush, quiet, and worthy of a luxury badge.

The Mercedes-Benz EQB was introduced toward the end of the 2022 model year in Exclusive and Pinnacle form, with the step-up Pinnacle version adding Burmester surround sound, a panoramic roof, and a surround-view camera system. A Driver Assistance Package, Technology Package, and AMG Night Package are among the option highlights.

Other markets get a single-motor front-wheel-drive version of the EQB, but Mercedes says that isn’t part of the plan for the U.S.—at least for now.

The EQB is, in some ways, an extension of the former B-Class Electric, later badged the B250e. While that model was limited primarily to California and used an electric drive system from Tesla, the EQB is entirely an in-house creation, using Mercedes’ own drive components, and battery cells sourced by subsidiary Accumotive. The EQB is built in Hungary, alongside the GLB, for Europe and the U.S., and it’s also locally made in China for that market.

Be the first one to write a review on 2022 Mercedes-Benz EQB Class
Rate and Review your car for The Car Connection! Tell us your own ratings for a vehicle you own. Rate your car on Performance, Safety, Features and more.
Write a Review