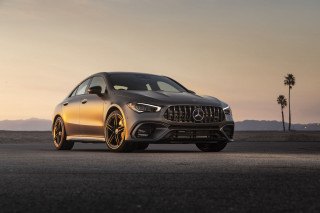 The Mercedes-Benz CLA compact sedan is the smallest sedan on sale by the luxury automaker, and is related to the GLA-Class crossover SUV and A-Class sedan. It's sold in other countries as a hatchback, although in the U.S. it's just a four-door sedan.

Competing on size alone, the CLA-Class is on par with the BMW 2-Series and Audi A3.

Mercedes-Benz is now doubling down on small sedans with its more practical A-Class and its shapely CLA-Class. A new CLA bowed for 2020, just months behind the 2019 A-Class.

Redesigned for 2020, the new CLA-Class sedan looks a lot like its predecessor, but is slightly larger outside and somehow slightly less spacious inside.

A 2.0-liter turbo-4 remains the base powerplant paired to a 7-speed dual-clutch automatic transmission. Front-wheel drive is standard and Mercedes' 4Matic all-wheel-drive system is optional. While base CLA 250 sedans have 221 hp, a new CLA35 AMG edition has 302 horsepower and standard all-wheel drive—and it portends the return of the CLA45 AMG in short order.

The new CLA makes its biggest strides inside, where a pair of digital displays take up residence on the dashboard. Standard for 2020 are two 7.0-inch displays, one for the instrument cluster and the other for infotainment. A pair of 10.3-inch screens under a single pane of glass are optional, however. Mercedes' MBUX infotainment system arrives in the CLA-Class and can be controlled via voice, a touchpad, a touchscreen, or even hand gestures.

For 2021, Mercedes added blind-spot monitors and ambient lighting as standard equipment on the CLA-Class. Few changes were made for 2022.

The CLA 250 first arrived for the 2014 model year. In its baes guise, it is an efficient performer, utilizing a 2.0-liter turbo-4 good for 208 hp and 258 lb-ft of torque in the CLA 250, allowing a 0-to-60-mph time of 6.7 seconds; top speed is capped at 149 mph. As is the case in most modern Mercedes, only one transmission is offered, and it's an automatic. Unlike most current Benz products, however, it's a dual-clutch unit with seven speeds. Shifting is accomplished by a column-mounted stalk, leaving more room on the center console. The CLA 250 can be optioned with all-wheel drive, which in this case has a variable torque split with the ability to send half of the available twist to the rear wheels when necessary.

In the name of efficiency, the CLA employs electric power steering and an engine stop/start system. With help from a very low coefficient of drag, the front-wheel-drive CLA 250 returns a 30-mpg combined number in EPA testing; the all-wheel-drive and CLA AMG versions drop to 27 mpg combined.

That sporty feel in the U.S. version is due in part to a standard sport-suspension setup, which is lower and less compliant than the comfort setup offered in other markets. Front struts and a four-link independent rear suspension (isolated by a subcradle) are paired with 17-inch run-flat tires in base versions. Most U.S. vehicles come with 18-inch AMG-style alloy wheels and summer tires, as well as slotted front brake discs. Handling is responsive, and ride quality is very firm, far more so than with the Verano, A3, or ILX.

Among its standard safety features, the CLA boasts a new automatic braking function that uses radar and the CLA can alert the driver of upcoming obstacles when it's traveling at more than 4 mph and can calculate the amount of brake force needed to avoid an impact. Mercedes-Benz made a rearview camera system standard for 2017. Also standard are fatigue alerts and its coffee-cup reminder to pull over and avoid drowsy driving, and a driver knee airbag. Safety options include adaptive cruise control; blind-spot monitors; lane-keeping assistance; and parking sensors with parking assist.

On the infotainment side, the CLA comes with standard Bluetooth, cruise control, a power driver seat, and vinyl upholstery. It also sports the latest smartphone connectivity functions via Mercedes-Benz's latest infotainment system, all displayed on a 5.8-inch screen, with basic navigation functions available. An intermediate Becker navigation system is offered, while the most elaborate, and optional, infotainment system offers a 7.0-inch screen and Mercedes-dubbed COMAND system, which controls the multimedia package's navigation system, DVD changer, 10GB music drive, or SD card (as well as phone services) with voice commands.

For 2016, there were a handful of feature and option changes to the standard CLA 250, but the performance CLA45 AMG gets a power boost. It now produces 375 horsepower (up 20 hp) and 350 pound-feet of torque (up 18 lb-ft). The added power rockets the littlest AMG sedan to 60 mph in a startlingly low 4.1 seconds.

The 2017 Mercedes-Benz CLA-Class received some modest cosmetic upgrades inside and out, including new bumpers and a revised front-end look, Other improvements for 2017 included new seat covers, new chrome-plated controls, and new trim pieces; and the instrument cluster gauges have a new look, with red needles. Some of the new trims include a “sail-look finish,” as well as matte black ash wood and black Dinamica microfiber.

The Mercedes-Benz CLA 45 AMG is a much different car—an exciting performer with 375 hp and standard all-wheel drive, which combine for a 0-60 mph time of 4.6 seconds. In its first year on sale, it was named Motor Authority's Best Car To Buy 2014. It is much more rare on roads than the CLA 250, as is the case with most AMG-fettled Mercedes models.

Rate and Review your car for The Car Connection! Tell us your own ratings for a vehicle you own. Rate your car on Performance, Safety, Features and more.
Write a Review
2015 Mercedes-Benz CLA Class 4-Door Sedan CLA 250 FWD

I like Car Design and Looking Awesome, and best perfomance
people found this helpful.
Was this review helpful to you? Yes
2014 Mercedes-Benz CLA Class 4-Door Sedan CLA 250 4MATIC

I love this car! It had everything I was looking for: great look, speed, terrific mileage, and easy handling in the snow. Great job Mercedes. This was my first MB but definitely not my last!
people found this helpful.
Was this review helpful to you? Yes
2014 Mercedes-Benz CLA Class 4-Door Sedan CLA 250 4MATIC