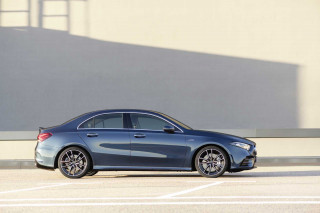 The Mercedes-Benz A-Class is a compact sedan that is the luxury brand's most affordable new car on sale. It's related to the swoopy CLA-Class and GLA-Class crossover, but the A-Class sedan is a true four-door, through and through.

More than just a value proposition, the A-Class showcases some of Mercedes' latest tech. When the car arrived in 2018, it was the first to receive Benz's updated infotainment system, dubbed Mercedes-Benz User Experience (MBUX) with touchscreens and natural voice commands. For 2020, the A-Class will be joined by a hotter A35 sedan that makes more than 300 horsepower. The constraints of 2022 meant no AMG models, leaving the A220 as the only available model.

With the A-Class, Mercedes-Benz has a competitor for the BMW 2-Series, Audi A3, and Acura ILX.

On sale in late 2018, the 2019 Mercedes-Benz A220 arrived in the U.S. for the first time in the nameplate's history. Powered by a 188-horsepower turbo-4, the A-Class is related to the CLA-Class but skips the swoopier lines of the small sedan in favor of a more traditional shape.

The A220 was made available with front- or all-wheel drive, which Mercedes-Benz calls "4Matic," and all versions use a 7-speed dual-clutch automatic transmission. Four-wheel independent suspension helped the small sedan stay planted on the road, while a stiffer body compared to the CLA-Class gifted the suspension more compliance to soak up ratty roads.

Inside, the A220 featured two, large screens in different sizes. Base models get a pair of 7.0-inch screens for its digital instrument cluster and infotainment system. Top trims swap out the smaller screens for a pair of bigger 10.3-inch screens tasked with the same information. Regardless of screen size, the infotainment screens are touchscreens and boast Apple CarPlay and Android Auto compatibility. Aside from smartphone systems, the MBUX system featured natural voice commands to "wake" the system up. Simply saying "Hey, Mercedes" or "Mercedes" (similar to Siri or Alexa or Google) could prompt the system into setting a destination in navigation, turn the radio up, find the nearest gas station. Mercedes says the system uses onboard computers or cloud-based data to understand commands.

The A220 seats four adults with more head room than the CLA-Class, a byproduct of its traditional sedan shape. The trunk holds 8.6 cubic feet of cargo, which is small for its class. A hatchback version of the A-Class is sold in other parts of the world, but Mercedes isn't likely to bring those to the U.S.

Safety features on the A-Class include forward-collision warnings with automatic emergency braking, blind-spot monitors, a surround-view camera system, and active lane control. Most advanced safety features cost extra on the A220, unlike similar offerings from other automakers.

Be the first one to write a review on 2022 Mercedes-Benz A Class
Rate and Review your car for The Car Connection! Tell us your own ratings for a vehicle you own. Rate your car on Performance, Safety, Features and more.
Write a Review