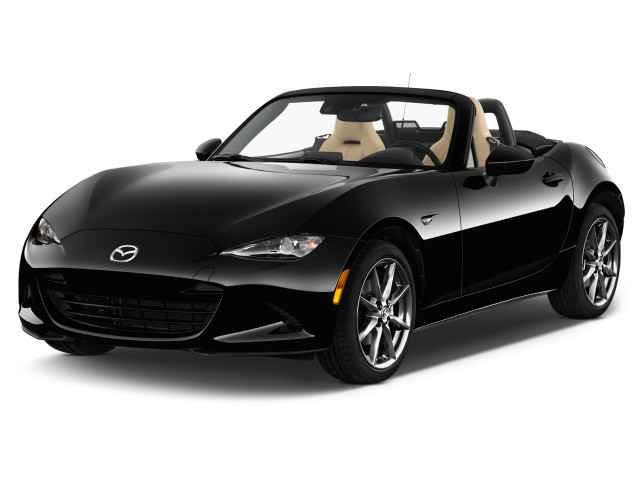 The Mazda MX-5 Miata is a throwback two-seater sports car that recalls iconic lightweight classic British roadsters. While it's rekindled a love of classic cars, it's also converted a new generation to the joys of top-down driving in a simple, nimble, back-to-basics two-seater without excessive power.

A 2016 redesign marked the launch of the Miata's fourth generation, internally known as ND. In 2017, Mazda added a retractable hardtop version (dubbed "RF") and in 2019 added a revised engine that makes more power. In 2020 Mazda made automatic emergency braking standard, along with Apple CarPlay and Android Auto compatibility.

With the MX-5 Miata, Mazda has one of the last, true sports cars on the road. Designed in the 1980s as an homage to the classic British roadster, the Miata offered up all the driving fun of those sports cars, but virtually none of the ownership pains. That combination continues today.

The re-engineered and redesigned fourth-generation Miata was a classic on arrival.

The 2016 redesign brings the Miata in line with some modern safety, efficiency, and tech expectations, all while preserving that delicate sweet spot that makes it different from anything else on the market.

Versus the prior (NC) generation, the current Miata is shorter and sits lower. Its styling follows Mazda’s latest "Kodo" design language, evolved from the Mazda 6, Mazda CX-5, and Mazda 3, and made a little more pert. Inside, the Miata features low-slung seating, a prominent center console, big analog gauges, and a horizontal, shelf-like instrument panel. One notable concession to modernity is the available 7.0-inch standalone infotainment screen.

Under the hood is Mazda’s 2.0-liter "SkyActiv" direct-injection inline-4, which runs a high 13:1 compression ratio. The engine’s 155-horsepower and 148 pound-foot ratings aren't impressive on their own, but considering the car's light weight (as low as 2,331 pounds), it's plenty—provided you keep the engine revving. The electric-assist rack-and-pinion steering is very precise, and the front wishbone, rear multi-link suspension helps keep the driver feeling bonded with the car in every twist and turn.

The Miata remains a two-seater with a limited amount of space—just enough for the driver and passenger. Ride quality is reasonably good (although the Club is noticeably stiffer), and wind buffeting with the top down is impressive. The RF shuts out some of that wind and road noise, and adds a measure of security. The roadster's manual top can be raised or lowered with one arm (thanks to a helper spring) in less than 10 seconds, while the RF's power top takes 13 seconds to open or close.

Three different models of the Miata are offered, though the RF is only available in two. The roadster gets a base Sport model, and both body styles come in an enthusiast-oriented Club model and a more luxurious Grand Touring. The Club model is the most aggressive performance setup available; outfit it with the manual transmission and you get a limited-slip differential, Bilstein shocks, and a shock tower brace. You can go even further with a Brembo/BBS brake-and-wheel package. GT models add Bose audio with a subwoofer, a universal garage-door opener, heated seats, automatic climate control, and leather upholstery, plus 17-inch bright alloy wheels. The Club gets some active safety features and the Grand Touring adds even more, but no Miata comes with forward collision warnings or a rearview camera.

The 2017 Fiat 124 Spider is assembled alongside the Miata in Japan.

For 2017, Mazda added the RF body style. RF stands for retractable fastback. It boasts a retractable hardtop that gives the Miata a coupe-like roof with the top up and a targa-like appearance with the top down. Changes for 2018 included a new red softop option and available Recaro seats.

With Japanese reliability and the personality of something like the legendary Lotus Elan (not to mention similar hideaway headlights in the first generation), the Miata was nothing short of a revolution when it first went on sale for the 1990 model year. A small, two-seat sports car, the Miata was an instant classic. Everything about it recalled classic roadsters, with a long hood and short cabin; a front-engine, rear-wheel-drive layout; and a design that kept it lean and simple, sometimes at the expense of some comfort.

The Miata's success inspired other automakers to build their take on the classic sports car. The BMW Z3, Porsche Boxster, and Mercedes-Benz SLK-Class arrived over the next decade. Those German models, though they started out as more stripped-down machines, quickly went upmarket, with the BMW and Mercedes trading in 4-cylinder engines for 6 cylinders. GM even got in on the act, with the short-lived Pontiac Solstice and Saturn Sky.

The powertrain in the original Miata was a 1.6-liter inline-4 available with a choice of 5-speed manual or automatic transmissions, growing slightly with each new generation. In 1993, the engine was enlarged to 1.8 liters, and in 1998 the second-generation car was introduced. The same 1.8-liter engine powered the second MX-5 Miata, though it received a slight increase in power. The second-generation Miata offered a Mazdaspeed version in 2004 and 2005, which added a turbocharger to the 1.8-liter engine, increasing output significantly from 130 hp to 178 hp.

The third-generation car was introduced in 2005 for the 2006 model year. It again gained a larger engine, up to 2.0 liters and 160 hp standard (167 hp in 2009-2010 models), with a 5- or 6-speed manual transmission, or a 6-speed automatic, though the engine was detuned to 158 hp when paired with the automatic. Models with the 6-speed manual were available with a limited-slip differential.

While the Miata maintained a go-kart-like handling feel, with a low-to-the-road driving position that tended to exaggerate the feeling of speed without breaking the speed limit, the tight cabin could lend a feeling of vulnerability—or intimacy.

True to its essence, the base cloth top on the Miata hasn't ever been power-operated, but it remained fairly easy to open and close with a single hand. For the 2007 model year, however, a clever power-retractable hardtop version of the Miata was introduced. Thanks to smart design, the hardtop opened and closed quickly, preserved head room, took up no more trunk space than the cloth top, and created a tight, quiet cabin environment that made driving in cold weather considerably more civilized.

An MX-5 Miata Club trim was new for 2013. With a 6-speed manual transmission and a stiffer suspension tune, it had a somewhat sharper driving feel. For the 2015 model year, Mazda effectively signed off on the third-generation Miata with a special 25th Anniversary Edition.

Rate and Review your car for The Car Connection! Tell us your own ratings for a vehicle you own. Rate your car on Performance, Safety, Features and more.
Write a Review
2017 Mazda MX-5 Miata Club Manual