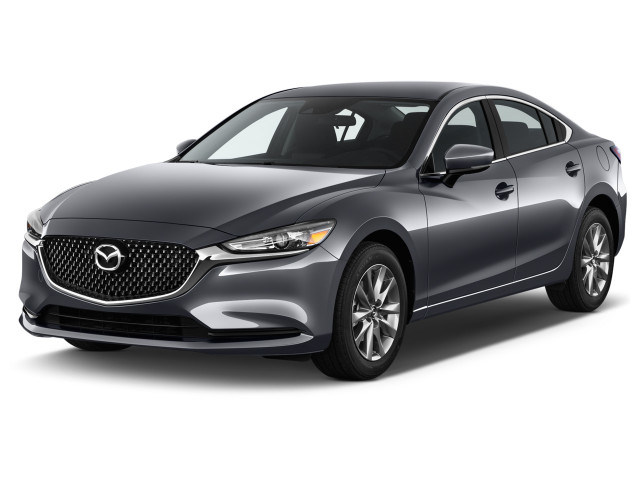 The four-door, mid-size Mazda 6 sedan is a stalwart for the automaker—despite some inattention from some shoppers.

It was updated for 2016 and in 2018 a new, more powerful turbo-4 was added. In 2019, the automaker made active safety features standard, added Apple CarPlay and Android Auto compatibility in most models, and shelved a slow-selling manual transmission.

With the 6, Mazda has a mid-size sedan to compete against the Toyota Camry, Nissan Altima, Honda Accord, and particularly the Ford Fusion, which also sports good looks.

The third-generation Mazda 6 arrived in early 2013 as a 2014 model, with production of the U.S. version shifted back to Japan from Michigan. The car is lighter and leaner, with great fuel economy courtesy of two gas engines from Mazda's SkyActiv family. A diesel has been promised since launch, but delays have kept it from us, and it may or may not still make it here for this generation; that decision has likely been complicated by the drop in gas prices that makes diesel fuel more expensive.

In design, the latest Mazda 6 follows the radical Takeri Concept introduced at the 2011 Tokyo Motor Show. It's sleek, elegant, and noticeable. We have also found the new Mazda 6 to be more refined than ever—with responses that are athletic, if not overly sharp and sporty. A 187-horsepower, 2.5-liter gasoline SkyActiv inline-4 is standard paired to a 6-speed automatic. A relatively rare 6-speed manual was available in the Mazda 6 until 2018.

Standard features have been boosted throughout the lineup, although we've found that the latest infotainment interface in the 6 is a little disappointing compared to others in the class. There is plenty of standout active-safety technology in the Mazda 6, including adaptive front lighting, blind-spot monitors and rearview camera, an automatic emergency braking system, and a lane-departure warning system.

Mazda gave the 6 a major update for the 2016 model year. The interior and exterior were lightly refreshed, and cabin materials are improved. Mazda also fit the latest version of its infotainment system, which includes an optional head-up display; the infotainment system was first used in the new Mazda 3 and remains a marked improvement over the one in early versions of this 6 sedan, featuring a better screen and quicker responses. The 2016 car also switched to an electronic parking brake, which frees up some space on the redesigned center console.

For 2017, Mazda has added to the range-topping Grand Touring optioned up with the Premium Package its new G-Vectoring Control System, which works like "trail braking" by applying engine braking when the wheels are turned to shift weight forward. The end goal is to increase grip on the front tires in order to maximize turn-in tenacity. Once the turn is held, the system releases the torque load to transfer weight to the rear of the car. Mazda says that the deceleration force is subtle—just 0.01 g or less—in order to retain a more natural feel on the road.

For 2018, Mazda revised the interior with more premium amenities such as ventilated and offered an uprated turbo-4 borrowed form the CX-9 crossover. It makes 250 horsepower (using premium unleaded) in the Mazda 6 and is paired exclusively to a 6-speed automatic transmission; a manual is standard with the largely carried-over non-turbo base engine. Mazda improved the suspension and chassis in the sedan for 2018, offering a more composed ride. What wasn't added? An updated infotainment system, natch.

The IIHS named the 2019 Mazda 6 a Top Safety Pick winner. Changes were minimal for the 2020 model year.

The first Mazda 6 was a follow-up to the Mazda 626, which came before Mazda's shift to single-number model names. The first-generation car hit the market in 2002 as a 2003 model and ran for five years. It was available as a standard sedan, a sedan-like five-door hatchback, and a five-door station wagon. It offered a choice between a 2.3-liter inline-4 and a 3.0-liter V-6, and could be paired with a 5-speed automatic transmission or 6-speed manual. A Mazdaspeed version of the sedan was also available in 2006 and 2007 only. The Mazdaspeed6 offered an interesting combination of a turbo-4, a manual transmission, and all-wheel drive; the chassis was tweaked and the body and trim received had a sportier take as well.

A second-generation Mazda 6 arrived in the U.S. in 2008 as a 2009 model. Its design was specific to the U.S., a sort of Americanization to try and better capture mid-size buyers in this market. Engines received an upgrade in output and size; the inline-4 grew to 2.5 liters while the V-6 expanded to 3.7 liters. Mazda kept the four-door sedan, but dropped the wagon and five-door hatch for this market. A Mazdaspeed also did not return.

Though it came in just the single sedan body style, this 2009-2013 Mazda 6 offered a full seven trim levels over its life span, ranging from economical family-sedan models to luxurious grand tourers. The entry-level Mazda 6 i SV offered a strong base feature set including a 6-speed manual transmission, the 170-horsepower inline-4 engine, and standard stability control and anti-lock brakes, but did without alloy wheels, keyless entry, or an advanced stereo system. The Mazda 6 i Sport added the option of a 5-speed automatic transmission, keyless entry, cruise control, and steering-wheel audio controls, among other features. The Mazda 6 i Touring had 17-inch alloy wheels, an eight-way power driver's seat, halogen fog lights, and an upgraded six-disc stereo system. Upgrading to the Mazda 6 i Touring Plus deleted the option of a manual transmission while adding a power moonroof, electroluminescent gauges, blind-spot monitoring, and an anti-theft system.

Rate and Review your car for The Car Connection! Tell us your own ratings for a vehicle you own. Rate your car on Performance, Safety, Features and more.
Write a Review
2016 Mazda MAZDA6 4-Door Sedan Automatic i Grand Touring

Amazing Car! Could Not Be Any Happier

Overall, i would say this car is a 9.0 out of 10. From the interior to the exterior, the 6 GT is what a car should look and drive like. Mazda's SkyActiv Technology is what all cars should be about. Perfection is rarely achieved but Mazda nailed it just about. + More »
people found this helpful.
Was this review helpful to you? Yes
For 2016 Mazda MAZDA6

This is best car for the value.

Nice car for young age people as well as middle age peoples.
people found this helpful.
Was this review helpful to you? Yes
See More Reviews