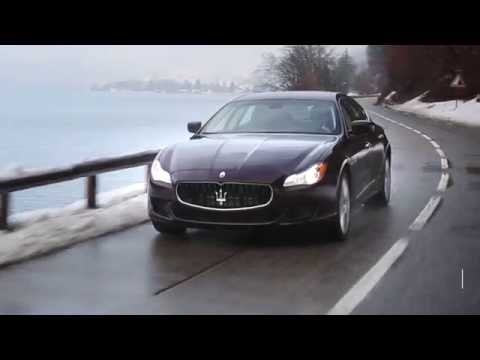 The Maserati Quattroporte is a four-door sedan from the Italian luxury automaker.

This new four-door also gave light to a smaller version, which revives the Ghibli nameplate and shares some powertrain components. For the first time, Maserati offers all-wheel drive on the Quattroporte, along with its new smaller sibling, the Ghibli.

Its name translates into English as "four doors" and has been part of the Maserati stable since the 1960s. Initially a pure luxury car, the Quattroporte changed tack in the 1990s when a Ferrari-sourced V-8 was planted under the hood.

The Quattroporte—Q-porte for short—can be considered a four-door coupe as a result of its latest styling, but is classified as a four-door luxury performance sedan. As such, it is a rival for vehicles like the Jaguar XJ and Audi A7/S7/RS 7, and perhaps even the Aston Martin Rapide.

Up close, the details of the new Quattroporte aren't clearly related to its predecessor, but step back a few feet and the flowing proportions resolve into perfect, familial clarity. Crisp creases and angular accents dominate the new exterior design. An ovoid grille with a large trident emblem dominates the nose, sweeping up to the curved hood and into the fenders. A character line traces along the side and over the flanks, into a simple, understated rear end. The overall effect is one of refinement and class, as well as emotive style. Inside, the look is more subdued, but no less well-executed. Satin woods and fine leathers meet with metal accents in a clean, two-tone finish.

There are two engine options in the latest Quattroporte, both of which are twin-turbocharged: a 3.0-liter V-6 making 404 to 410 horsepower in the S and a 530-horsepower, 3.8-liter V-8 for the GTS. The V-6 model hits 60 mph in around five seconds, while the V-8 reduces the time to 4.7. Rear-wheel drive is standard with both engines, while all-wheel drive is an option on the V-6 model. Both engines use a ZF-sourced 8-speed automatic with paddle shifters. The all-wheel-drive system, dubbed Q4, can apportion up to 50 percent of torque to the front wheels when necessary, but usually sends all of it to the rear otherwise, for a sportier experience.

Equipment and features are, as with any Maserati, quite good even in base form, and there are many possibilities for personalization and customization. Available features include a 1,280-watt Bowers & Wilkins audio system; Maserati Touch Control screen; adjustable pedals; a reverse camera; and in-car wi-fi. Maserati offers an Ermenegildo Zegna Limited Edition model of the Quattroporte named for the famed Italian design house and featuring finishes chosen by the fashion experts.

The Quattroporte received several minor updates for 2015, most of them related to aesthetics or increased feature availability. Cars now come with a three-month subscription to the SiriusXM "All Access" package as well as a wider selection of trim options, such as contrast stitching, red leather upholstery, and piano black dash accents. The in-car wi-fi system is now standard, as well. The GTS gets lower body trim that matches the color of the rest of the car, a trident badge with some red accents, and red-accented wheel center caps, all of which help set it apart from the S model.

For the 2016 model year, the big Maserati sedan adds a rear-drive Q-Porte powered by the V-6. The new Quattroporte S has the twin-turbo V-6 rated at 404 hp. New features for 2016 include a hands-free trunklid, stop-start, blind-spot monitors, new Zegna-penned trim packages, and a 900-watt Harman Kardon audio system or a Bowers & Wilkins premium audio system.

An update in 2017 included a new 8.4-inch touchscreen, slightly restyled front and rear bumpers, and Quattroporte GranLusso and GranSport trims to emphasize the car's luxury or sporty characters, respectively.

Following on the sedans of the past, the Quattroporte that bowed in 2004 was designed by famed Italian styling house Pininfarina. It blended the sense of exclusivity and lavish feel found in a low-volume model with the passion of an Italian sports car. Introduced in that year, the fifth-generation Q-Porte had a shark-like front end, an aggressively raked windshield, and classic, elegant roofline fronted by a long hood, the Quattroporte's styling struck a middle ground between sports-car athleticism and sedan elegance. Almost no two Quattroportes of this generation were the same. Most were built to order, with many upholstery, paint, trim, and interior possibilities.

The more savage, sonorous character of this era of the Quattroporte is one of its most desirable aspects. It packed a Ferrari-built 400-hp, 4.2-liter dry-sump V-8 under its hood, and the engine seldom went quietly. It felt more like a sports coupe than a sedan from the driver's seat, thanks to the combination of excellent sport seats and quite narrow footwells. Comfort wasn't really a strong point for this Quattroporte; there was enough back-seat space for two adults, and the trunk was surprisingly small.

Rate and Review your car for The Car Connection! Tell us your own ratings for a vehicle you own. Rate your car on Performance, Safety, Features and more.
Write a Review
2009 Maserati Quattroporte 4-Door Sedan Quattroporte S

Wanted luxury and speed/handling..... got it !