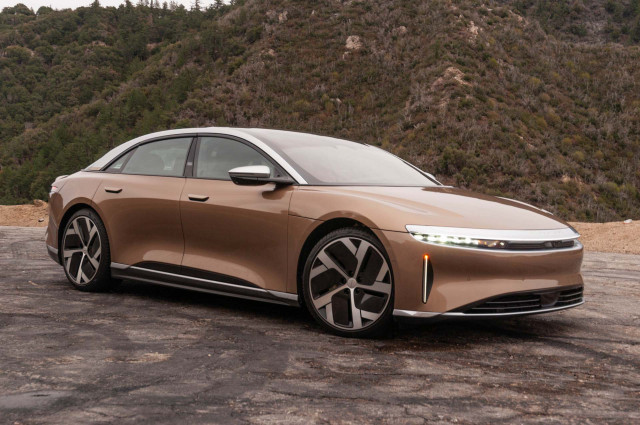 The Lucid Air is a large battery electric luxury sedan from a new California-based automaker, Lucid Motors. The Air is built in Arizona and offers the longest driving range—up to 520 miles—of any production electric car.

Performance for the Air, which offers dual-motor all-wheel drive and up to 1,111 hp, rivals not just the Tesla Model S, but also the Mercedes-Benz EQS, Porsche Taycan, and Audi E-Tron GT.

The Air is about the same size as the Tesla Model S or BMW 5-Series, but it feels far roomier inside—thanks to its platform that takes full advantage of a contoured, low-mounted battery pack and dramatically downsized propulsion systems. A glass roof provides uninterrupted light from the base of the windshield to mid-roof.

The Air’s exterior is unlike that of any other sedan, with a cab-forward look smoothed over by aircraft-inspired cues, narrow lighting elements, and a Citroën-like sensibility to the curves of the roof and windows. Inside, the look is neither Tesla austere nor Mercedes opulent; it follows a bright, modern-luxury look more like Volvo or Land Rover, focusing on porous textures and no-drama ambience. A 34-inch-wide glass cockpit screen up above and retractable touchscreen at the middle of the dash offer a good midpoint, again, between Tesla’s single tablet screen and Mercedes’ full-dash Hyperscreen.

Technology is the star in the Air. Lucid was formed in 2007 as Atieva and originally aimed to make propulsion systems for other automakers. It was named the sole supplier for the battery packs powering Formula E over the past three seasons, and the centerpoint of its technology suite is a set of dramatically downsized components—motor, differential, inverter, power unit, and battery pack, all optimized for efficiency.

In the Air, the tech—plus top-notch development in every other respect—enables a 0-60 mph time of less than 2.5 seconds in debut Dream Edition form, with a quarter-mile time of just 9.9 seconds. It’s also the fastest-charging EV at present, with the potential to recover 300 miles in 20 minutes on 350-kw CCS DC fast-charging hardware.

The Gravity, an SUV based on the Air sedan, is due to be made alongside the Air starting in 2023, with other smaller and more affordable models likely to follow.

Lucid plans to sell and support its vehicles with a model that keeps close to that of Tesla, avoiding a traditional franchise model, with a network of service centers and gallery-style studios, and customer service done mostly concierge-style.

Be the first one to write a review on 2022 Lucid Air
Rate and Review your car for The Car Connection! Tell us your own ratings for a vehicle you own. Rate your car on Performance, Safety, Features and more.
Write a Review