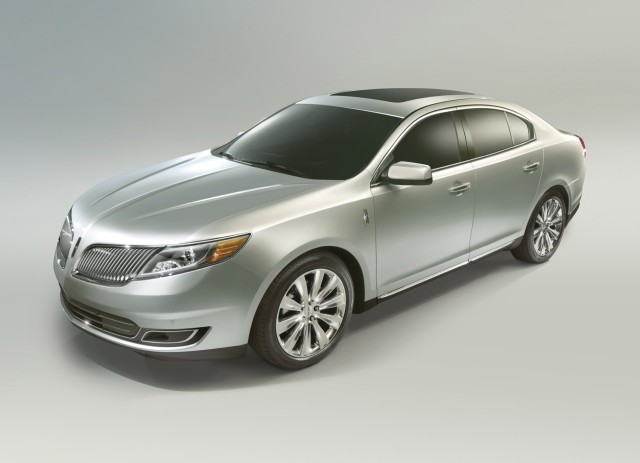 The Lincoln MKS is a full-size, four-door sedan. When it was new for the 2009 model year, the MKS became the replacement for two cars: the smaller Lincoln LS sedan and to some extent, the well-known and aged Town Car. While the MKS wasn't as long as the old Town Car, it actually provided more interior space — as well as more modern style, far better roadholding, higher fuel efficiency, and many more features.

The MKS shares underpinnings with the Ford Taurus sedan, and it's the largest four-door sedan from the Ford Motor Co. luxury brand. Compared to the Taurus, the MKS has many more high-tech features, a more luxurious interior, and entirely distinct styling and bodywork.

The MKS is offered in either front- or all-wheel-drive versions, with a choice of normally aspirated and turbocharged six-cylinder engines. Its closest competition includes sedans like the Volvo S80 (with which it also shares a platform), Acura RLX, and Cadillac XTS.

A replacement for the MKS is due mid-way through the 2016 model year—in the form of the 2017 Lincoln Continental, based on the Lincoln Continental concept sedan shown at the New York Auto Show in April 2015. It, like the next Ford Taurus, will be built on a stretched version of the Ford Fusion platform. The 2.7-liter EcoBoost V-6 that's being offered in several new Ford products could find a home in the next MKS as well. The polarizing MyLincoln Touch system may be replaced by Sync 3, the latest version of Ford's infotainment setup, at that time.

Lincoln hinted at the MKS first with a concept vehicle shown at the 2006 Detroit auto show. The production version emerged at the 2007 Los Angeles auto show before sales began in 2008 with the MKS marketed as a 2009 model.

For its first model year, the Lincoln MKS featured a single engine, a 3.7-liter V-6 with 252 horsepower, coupled to a six-speed automatic transmission. The underpinnings included an independent suspension derived from a family of vehicles that include the Volvo XC90, the Ford Taurus, and the Ford Flex. While reviewers appreciated its large cabin and the nicely detailed interior, the MKS didn't quite earn the plaudits of the German sedans in the class—the BMW 5-Series and Mercedes-Benz E-Class. Handling leaned more toward plush, and straight-line performance was quick but certainly not blazing.

The handsome MKS gained more traction with the addition of a turbocharged model for the 2010 model year. The MKS with Ford's twin-turbo "EcoBoost" V-6 puts out 355 horsepower and is mated to the same six-speed automatic–fitted with paddle-shift controls in this case—with slightly firmer suspension tuning. A similar powertrain is used in Ford's Taurus SHO. The turbocharged edition hits 60 mph in an estimated 6.5 seconds, and a top speed of 135 mph, while returning fuel economy estimates of at least 16/22 mpg (it was estimated at 17/25 mpg in non-turbo versions).

Below the swoopy roofline, the MKS cabin offers comfort and space for occupants, surrounding them with luxurious appointments. Wood lines the dash and metallic trim is dotted throughout, with everything bathed in a glow of white lighting to make it feel as fancy as any Lexus. Front-seat passengers will be especially comfortable, although the headrests can bother some as they're positioned farther forward than on most cars. Rear-seat passengers are treated to decent legroom and a good amount of headroom.

The MKS is highly rated in safety testing. It has standard dual front, side, and curtain airbags, along with anti-lock brakes, plus traction and stability control. A rearview camera and front parking sensors also are standard, while adaptive cruise control and active park assist are options. Active park assist uses sensors to determine steering angle and "parks" the car for the driver, who operates only the gas and brake while the MKS with EcoBoost (and its electric power steering) turns the wheel for perfect parking. Blind-spot monitors are now offered as well.

For the 2013 model year, the Lincoln MKS received its most extensive update since it went on sale. A new, slimmer grille and a revamped dash were the most obvious changes, along with the adoption of MyLincoln Touch--the voice, steering-wheel, and touchscreen-driven control system for the MKS' infotainment features. New safety features including lane-keeping alerts, and wireless Internet capability were also included in the model-year update. The MKS also received a new adaptive suspension, and a power increase on its base engine from 274 hp to 304 hp--along with a boost in fuel economy to an estimated 18/27 mpg.

Lincoln also added a livery version of the MKS for 2013 to help it retain or regain some of the sales it lost when the Town Car sedan went out of production. It is available with only with the 3.7-liter V-6 and either front- or all-wheel drive. Ford says the sedan can be stretched by up to six inches by certified upfitters.

For 2015, Lincoln performed some very minor surgery on the MKS's rear end in the name of usability. The decklid has been completely redesigned to improve access to the trunk-release button. As a result, the Lincoln star is gone from the back end, replaced by the brand's name spelled out in large letters across the trunk, just above a new winged trim piece. The change has the side effect (intended or otherwise) of making the rear end look that much more like the Jaguar XJ's.

The Lincoln MKS is built at Ford's Chicago Assembly plant in Chicago, Illinois.

Rate and Review your car for The Car Connection! Tell us your own ratings for a vehicle you own. Rate your car on Performance, Safety, Features and more.
Write a Review
2016 Lincoln MKS 4-Door Sedan 3.5L AWD EcoBoost

I’ve had negative experiences overall with all 3

1—The interior is the most infuriating, poorly designed ergonmically, and frustrating aspect of the car; I will give the car credit where due toward the end of describing the interior:

1. It’s missing a wiper stalk, instead there’s a knob on the turn signal stalk. You can either use rainsensing wipers and control the sensitivity with the knob, or have a fixed rate (if you turn rain sensing off through the left side menu). Single wipe is the same button for washing the windshield. Why would rainsensing wipers need different sensitivities?? Counter intuitive, especially when you consider even the highest setting rainsensing wiper lets the whole windshield get covered for a few seconds before wiping if it starts as a light drizzle.

2. The ac vents can’t be closed you can only point them in different directions, there’s no light or chrome to find either of these in the dark; (but they remembered to light the cupholders funny enough).

3. The interior overall is bland at best, a million different panels make up the center console, it looks messy just like in the taurus. The dashboard and door in lower end models is just two poorly alligned panels of chrome and a bit of wood. The full wood trim on upper end looks nice but the soft leather in the lower end feels nice

4. The only physical gauge the car has is the speedometer; and the digital display for the other features is awful. The car generally offers very little information on the more baseline levels; your only choices are look at the fuel economy; how many miles you have left until empty, or a jawdroppingly ugly tach with a cheap looking fuel bar gauge and the OPTION to see your temp gauge.

You can’t see it at all if you have the display on current fuel economy or miles to empty; using a paddle ahifter takes you out fo this screen and immediately to the low quality tachometer.

You can’t see any of your information, and use paddle shifters at the same time; NO OTHER CAR (that I’m aware of) does this. It forces you out of the screen your on to show you the gear you’re shifting into.

ON TO THE GOOD THINGS: leather is everywhere and very soft and very nice. The car is roomy, and the sunroof is huge. Personally I don’t like it, but with the black interior you get a really nice black headliner; and the car looks great with khaki interior. The steering wheel feels suprisingly nice in your hand too, soft smooth leather and a bit of wood trim.

1. 3.5l and 3.7 are both pretty awful but I’ll mostly complain about the ecoboost 3.5 in this scenario. With all that torque you get your power quickly but the car would: stutter when you lift foot off the gas; hold gears too long especially after 45mph, upshift very roughly; (I noticed this on the 3rd lincoln the most so it kight be specific to that, otherwise I got more aware and sick of the car from having had 3), and the engine note was AWFUL.

At 45mph the car is in 4th sometimes in 5th, but usually in 4th. The car doesn’t actually upshift until you hit 60, this is noticeable when you coast because the car is revving at almost 3k rpms almost every time you coast at 55mph; the 3.7 didn’t have this issue. Breaking was fine, best ever from a ford; although I wish you could turn torque vectoring off as a standalone. Handling is sloppy but that’s an unfair thing to criticize a large sedan on.

2. Suspension was great, really soft ride. Engine was a bit noisy wind noise was well managed seats were comfy for long drives and with the bells and whistles included you had plenty to distract you; but honestly without them you had nothing. THX sound system is a must get, you don’t buy a lincoln to enjoy driving it you buy it for the features. Trunk could fit two bodies in there (I fit twice almost).

3. Fuel economy was just barely over 19mpg in the exoboost almost entirely highway. Same fuel economy I’d get in an old jeep I had, the eco in ecoboost is a big lie. They should've put the mustang v8 in there instead of a truck engine. Natural aspiration > turbo ford for fuel economy.

A full tank got barely over 300miles and currently costs a little over 50$ to fill up. Regular gas costs about 2.88 in my area (top of my head)
+ More »
people found this helpful.
Was this review helpful to you? Yes
2015 Lincoln MKS 4-Door Sedan 3.7L AWD

some critics say that they are better buys than this vehicle for the money , where?