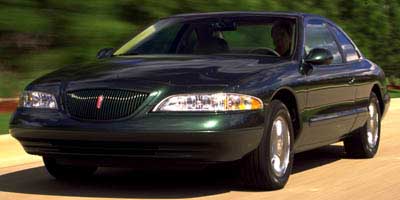 The Lincoln Mark VIII was the last in a half-century-long line of large personal luxury coupes produced by Ford's premium brand. Built from 1992 through 1998, it shared underpinnings with the Ford Thunderbird that was the large coupe sold by its sister brand. The rear-wheel-drive coupe was not as well received, nor viewed to be as stylish, as its predecessor the Lincoln Mark VII, made from 1984 through 1991.

Unlike its relatively upright predecessor, the Mark VIII was a radical stylistic departure, using then-prevalent Ford styling themes of smooth and rounded shapes and scalloped sides. It was lower and longer than the Mark VII, somewhat larger inside, and also slightly lighter. Sold in only one body style, a two-door coupe, the Lincoln Mark VIII was powered by an all-new aluminum 4.6-liter V-8 engine producing 280 horsepower and 285 lb-ft of torque, later boosted to 290 hp, driving the rear wheels through a four-speed automatic transmission.

In 1995, the instrument panel was slightly redesigned and new audio systems were introduced. A new model, the Mark VIII LSC, was also launched. Standing for Luxury Sport Coupe, it received the more powerful 290-hp engine, sportier suspension, and various trim differences inside and out, including monochrome exterior accents and High-Intensity Discharge (HID) headlamps.

The Mark VIII received a mild facelift for 1997, with a slightly more upright and traditional grille returning to the front end, with a slightly redesigned rear as well. The stylistic remnant "spare tire hump" on the trunklid was made smaller, and HID headlamps became standard. LSC models received further suspension upgrades. Unusually for an American car, the Mark VIII's side mirrors included both flashing LED signal lamps and so-called puddle lamps, which illuminated the ground below each door to assist occupants entering or exiting the big coupe.

With the large coupe market dwindling in the U.S., the Lincoln Mark VIII was not replaced when it reached the end of its model run. Instead, the mid-size Lincoln LS four-door sedan took its place in the lineup.

Rate and Review your car for The Car Connection! Tell us your own ratings for a vehicle you own. Rate your car on Performance, Safety, Features and more.
Write a Review
For 1997 Lincoln Mark VIII

Yes, there are some cars that do this or that better than the Mark VIII, and lots and lots of cars that don't do anything nearly as well, but very, very few models do so many things as well as this Lincoln. It's big enough, roomy enough, sporty enough, luxurious enough, more than fast enough, rides well enough, comfy enough, corners well enough, economical enough, reliable enough, and so on, to be, overall, the single most satisfying car I have ever owned.

The icing on this motorized cake is that there are touch screen navigation-infotainment systems available that fit right into the existing radio space on the center stack / console. Original JBL premium radio faces were very oversized, and these new state-of-the-art systems have nice, big screens. This almost 20 year old car can be brought up to date with the latest electronic goodies for around a grand. + More »
people found this helpful.
Was this review helpful to you? Yes