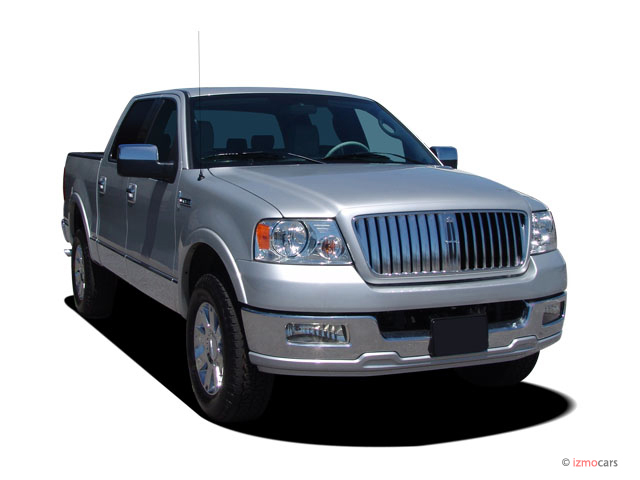 The Lincoln Mark LT was a luxury-trimmed version of the Ford F-150 pickup truck. A part of the Lincoln lineup in the U.S. from the 2006 to 2008 model years, the Mark LT was a successor to the ill-fated Lincoln Blackwood, the brand's first attempt at a high-falutin' pickup.

The Mark LT's sole powertrain teamed a 5.4-liter V-8 engine with 300 horsepower to a four-speed automatic transmission, which made possible a maximum rated towing capacity of 8,900 pounds. Throughout its three-year lifespan, the Mark LT's gas mileage was rated by the EPA as low as 12/16 mpg. Despite its V-8 engine, the Mark LT's performance wasn't brisk, only acceptable.

Available with either rear-wheel or four-wheel drive, the Mark LT rode on a suspension that was softened up compared to that in the F-150, to provide a more Lincoln-like ride. The suspension design, though, was common with the Ford, with a double-wishbone front suspension and a Hotchkiss rear end.

For passenger comfort and cargo storage, the Mark LT was as useful as the similar F-150. With four full doors, front captain's chairs, and a three-passenger rear bench, it had good room and support for five adults. With a high-end payload rating of 1,460 pounds, the Lincoln Mark LT could carry a lot more than the Blackwood, though the short bed limited its ultimate utility.

Inside, the Lincoln Mark LT was markedly different from the stock F-Series, with ebony-wood accents, leather seats, unique instruments, and pleasant textures all around. Add in a great audio system and the optional rear-seat entertainment system, and the LT could double for a private screening room. Eventually, all Mark LTs offered standard Sirius Satellite Radio; options included a rearview camera, a remote start system, and a Monochrome Appearance Package with a body-color grille surround, body-color bumpers, and 20-inch, seven-spoke chromed wheels.

Four-wheel anti-lock disc brakes with electronic brake-force distribution were standard, but the Mark LT lacked stability control, side and curtain airbags. Still, in the ratings system of the day, the NHTSA gave it five stars for front crash performance and four stars for rollover.

Lincoln never sold many Mark LT pickups, and from the moment it went on sale, it was heavily discounted. After just three model years, Ford set out on a major downsizing of its vehicle lineup--and the Mark LT was among the victims, discontinued after the 2008 model year.

Rate and Review your car for The Car Connection! Tell us your own ratings for a vehicle you own. Rate your car on Performance, Safety, Features and more.
Write a Review
2006 Lincoln Mark LT 4WD Supercrew 139"

Nice truck everyone thinks it is brand new and it is 10 years old.