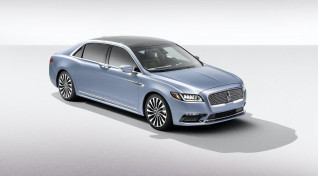 The Lincoln Continental is a full-size sedan and an iconic name for the storied automaker. It hasn't been used for a new car in 15 years, but the new Continental is a top-of-the-line sedan for Lincoln and a luxury flagship.

The company says the new Continental is an "elegant, effortlessly powerful, serene full-size sedan that delivers quiet luxury." Unlike sedans of the same size from Infiniti and Lexus, even Mercedes-Benz, the big Lincoln doesn't have particularly expressive design. It's distinctive, but it won't stop traffic.

It's the interior that Lincoln plans to use to distinguish the Continental from other luxury competitors. The cockpit wears lots of glossy wood trim, lots of shiny metal, and big and glossy digital displays. It's unapologetic old-school style.

The new Continental is based on enlarged underpinnings from the mid-size Ford Fusion and Lincoln MKZ sedans. That means a V-6 powering the front wheels, or all four wheels, although the most powerful engine—a 400-horsepower twin-turbocharged 3.0-liter V-6—isn't available on the Ford. The base engine is a 3.7-liter naturally aspirated V-6, while mid-level models sport a 2.7-liter twin-turbo V-6.

All models shift with a 6-speed automatic, and all-wheel drive is available on most versions.

The Continental rides on an independent suspension, which features adaptive dampers on some models, as well as a driving-mode system that can control the transmission, steering, and throttle. Wheel sizes range from 18 to 20 inches.

Inside, the Continental offers large-car space. Front seats can have up to 30-way adjustment, while the rear seat can be fitted with USB charging ports and armrest-mounted temperature controls.

A host of active-safety systems are offered, but only the most expensive versions can be fitted with a surround-view camera system, forward-collision warnings, and adaptive cruise control. The Continental has received top safety scores from federal and independent testers including a Top Safety Pick+ award from the IIHS.

Changes for 2018 amounted to just a few feature additions on certain trims. For 2019, all Continentals were given standard adaptive cruise control and active safety features including automatic emergency braking, lane-keep assist, and blind-spot monitors. For the 2020 model year the Continental added a few more features as standard or optional equipment.

Before the 2017 rebirth, the Continental had essentially become a long-wheelbase Ford Taurus from 1988 through the 2002 model year. But the name began as a brand unto itself, christened in the World War II era as a personal car for Edsel Ford, and produced in limited numbers just before and after the war. Ford revived the name in 1956 and applied it to a stunning, expensive Lincoln two-door hardtop coupe dubbed the Mark II.

The Continental coupe ran through Roman numerals III through VIII as it mostly grew larger, becoming a more direct rival for more popularly priced Cadillacs of the day, though never as innovative as the first front-wheel-drive Eldorado of the late 1960s. The Mark VII of 1984 brought some fresh air to the brand, especially with its LSC performance version, but the last of the Marks—the Mark VIII of 1993—lost the touch again. The Mark coupes were permanently retired after 1998.

The design heights for the Continental name, however, were reached with the 1961-1967 Continental, offered as a two-door coupe, a four-door sedan with suicide rear doors, and one of the few four-door convertibles ever built in volume. This Continental was the one converted for presidential use; one became the limousine in which President John F. Kennedy was assassinated. Its classically Modern lines were a decisive break from baroque late 1950s styling, and are revered even today as iconic designs.

By the end of the decade, the pricey Continental was due for a redesign, which it received in rather inglorious form, starting a downward trend in appeal and in construction quality that continued until it was killed. The hopelessly baroque Town Cars of the early 1980s were a grim sight, for any fan of the Mark II or the classic early 1960s cars.

With its 1988 redesign, the Continental found a new niche, as a spin-off of the wildly successful Taurus. Given its own smooth and less radical shape to distinguish it from the Taurus, the longer, long-wheelbase Continental also came with front-wheel drive—but, pointedly, no V-8 engine. Ford's 3.8-liter V-6 did the honors, through a 4-speed automatic transmission. This edition was relatively well received, and sold through the 1994 model year.

In 1995, the Continental was revamped, riding on a new generation of the same platform. The V-8 returned, in the form of a 4.6-liter engine coupled to a 4-speed automatic, but the front wheels were still the ones powering the car. The major innovations in this era were an air suspension and airbags. The model was perceived, though, as a car for older drivers.

As Ford began to absorb storied European luxury brands in the late 1990s, the business case for the Continental made less and less sense. Ford announced the end of Continental production in 2002, and the final models rolled off the assembly line that year.

Rate and Review your car for The Car Connection! Tell us your own ratings for a vehicle you own. Rate your car on Performance, Safety, Features and more.
Write a Review
For 2017 Lincoln Continental

Styling is so boring!!!

I hate it! So bland looking. I loved the concept model, it should have gone into production. I have owned three new MKS's,and loved them all. Guess I will look at the new Caddy for my next car.
people found this helpful.
Was this review helpful to you? Yes
For 2017 Lincoln Continental