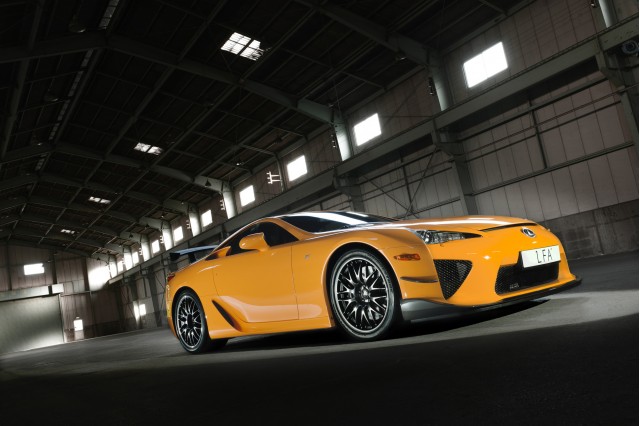 The $375,000 Lexus LFA is a very limited-production supercar that combines advanced, no-cost-spared engineering and development with Formula One–derived technology into an exotic sports-car design. It competes with some of the world's top supercars, such as the Lamborghini Gallardo, Aston Martin DBS, Ferrari 458 Italia, and McLaren MP4-12C.

For a number of reasons, the LFA is the kind of car that comes along at best once every decade or so—a special supercar that was essentially designed from scratch, with no predecessor and no predilections, to hit all the right marks and stand up on its own as top-performing exotic. And development of the LFA really did take a decade, beginning in early 2000, with the first prototype built in 2003 and the first concept version shown at the 2005 Detroit Auto Show; meanwhile, production didn't start until December 2010.

At just 3,250 pounds—thanks to high-tech carbon-fiber underpinnings—the front-mid-engine, rear-wheel-drive LFA is rather light relative to other supercars, while power from its high-revving (and quick-revving), F1-derived (and Yamaha co-developed) 4.8-liter V-10 engine is a standout 552 hp—allowing 0-60 mph in just 3.7 seconds and a top speed of 202 mph. Power is sent through a single-clutch six-speed sequential gearbox, while speed is scrubbed off quickly by Brembo carbon-ceramic brakes.

In our limited driving time with the Lexus LFA, we've picked out a few qualities that stand out against other supercars: first, its engine sound, which is somewhere between an F1 car and a baritone sportbike; and secondly, its interior, which is an odd assemblage of simple, almost racecar-like components mixed with Japanese futurism. Just in front of the driver, front and center, is a digital tachometer. Brake and accelerator pedals are hinged at the floor, and the seats are hand-finished in leather or Alcantara, with satin-metal or carbon-fiber trim. The feature list definitely has some features that help it fit alongside other Lexus models, like 12-speaker Mark Levinson audio, Lexus Enform services, a navigation system, and dual-zone climate control.

At the time of the LFA's launch, a total of just 500 units were to be built, with production of those stretching out until about the end of calendar-year 2013. Lexus early on stated that nearly the entire production run had been spoken for, with the LFA sold largely on a build-to-order basis. But in 2012, a special Nurburgring Edition—named after the famous road in Germany—added unique exterior and interior appearance details, plus some slight performance tweaks.

Be the first one to write a review on 2012 Lexus LFA
Rate and Review your car for The Car Connection! Tell us your own ratings for a vehicle you own. Rate your car on Performance, Safety, Features and more.
Write a Review