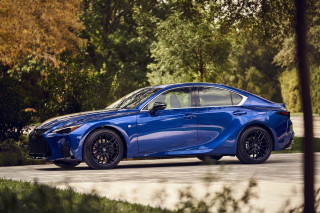 The Car Connection Lexus IS Overview

The Lexus IS four-door luxury compact sedan is a relative upstart compared to the BMW 3-Series and Mercedes-Benz C-Class—nearly everything is against those two.

Over time, the IS family has counted a sportback wagon, a two-door coupe, and a hardtop convertible, but it has since been pared back to a sedan—with the Lexus RC filling the two-door roll.

In the past with the IS, Lexus has offered a higher-power IS F version to rival super sedans from German automakers, although no such version exists for this generation.

The new Lexus IS

When it was new in 2014, the Lexus IS sedan carried over the base powertrains from the 2013 model. Everything else was new, including updated features and equipment, better packaging in a stiffer yet lighter-weight structure, a double-wishbone front suspension, and a new 8-speed automatic transmissions.

In the first two model years, Lexus offered two V-6 engines for the IS, a 2.5-liter in the IS 250 and a 3.5-liter in the IS 350. Both used automatic transmissions and were available with optional all-wheel drive, with rear-drive standard.

For 2016, the powertrain lineup was reconfigured. The new entry-level IS 200t was powered by a 2.0-liter turbo-4 with 241 horsepower. It came only with rear-wheel drive and an 8-speed automatic transmission with paddle shifters and three drive modes: Eco, Normal, and Sport—though cars with the F Sport package gain an extra Sport S+ mode.

For 2017, the exterior style was slightly refined with a bigger opening for the spindle grille and sharper headlights. Lexus also made a suite of advanced safety features standard, including forward collision alert with automatic emergency braking, lane departure alerts with active lane control, and adaptive cruise control.

For the 2018 model year, the IS 200t was renamed the IS300. Other changes were minimal, save for a 5-hp bump on V-6 cars. For 2019, Lexus added Amazon Alexa compatibility to the IS and consolidated some option packages. For 2020, a new Blackline appearance trim was offered on the F Sport model.

For 2021, Lexus refreshed the IS with distinct light signatures front and rear, new bumpers, a new dash layout crowned with a touchscreen, and more standard safety features. Lexus also streamlined the F Sport into the IS350 model. The F Sport's dynamic handling package remains, and adds a sportier suspension tune, 19-inch black forged alloy wheels, some aesthetic differences inside and out, and a neat LFA-inspired gauge cluster. in 2022, the IS 500 joined the lineup, powered by a 472-hp V-8.

The IS was first introduced for 2001, then a rebadged, lightly reconfigured version of the Toyota Altezza, a performance model sold in Japan. With a 3.0-liter inline-6, rear-wheel drive, and a choice of manual or automatic transmissions, the IS 300 was taken seriously by U.S. enthusiasts almost right away and seen as a rival to the BMW 3-Series.

Though the IS didn't quite have the handling and near-perfect balance of the BMW 3-Series, it offered strong performance, with its rating of 215 hp allowing 0-60 sprints in less than 7.5 seconds, and it had a number of appearance cues—like the chronograph-style gauge cluster—that were sportier than anything else in the Lexus lineup.

The first-generation IS 300 was also offered in a sport-wagon variant. Called the IS 300 SportCross, this wagon sold poorly when new but has since become sought-after on the used-car market.

While the original IS models drove well from an enthusiast standpoint, were reliable, and durable. They had quite basic interior appointments—as well as quite noisy interiors—that were more in line with vehicles in the Toyota line than those with the Lexus badge.

The IS was completely redesigned for 2006, adopting underpinnings that were based in part on the larger GS sport sedan. Eventually, the lineup was expanded to include IS 250 and IS 350 models, with the IS 250 available with all-wheel drive.

The 204-hp, 2.5-liter engine in the IS 250 produced just enough power to be enjoyable with the standard 6-speed manual, but was too taxed with all-wheel drive or the automatic transmission. The better pick of the two was the confident IS 350, which had a completely different character thanks to its 306 hp and more accessible low-rpm torque.

The two models both handled quite well, but the Lexus IS never quite gained the "underground" tuner following that the earlier 2001-2005 models enjoyed. The newer models were far more civil and enjoyable for day-to-day driving and passenger comfort. Backseat space was always been very tight in the IS, though.

Lexus tried to stoke enthusiast interest in the IS with both the introduction of a 417-hp, V-8-powered IS-F performance model, as well as a line of dealer-installed F Sport accessories that brought a much more aggressive appearance as well as suspension, braking, and exhaust upgrades.

In 2010, Lexus added the first IS-based convertible, the IS C. It was sold with either the 2.5-liter or 3.5-liter engine and only with rear-wheel drive. Unlike most of its competitors, the droptop IS used a retractable hardtop, providing better top-up stiffness, a quiet ride, and more of a refuge in bad weather. Because of its metal roof, the IS C competed most directly with BMW's 3-Series Convertible, but at a slightly lower price.

Through 2013, the IS sedan lineup carried over mostly unchanged, although for 2013 Lexus updated audio systems with HD Radio and iTunes tagging, and bundled Lexus Enform with AppSuite with the navigation system. The IS F was offered through 2014.

Rate and Review your car for The Car Connection! Tell us your own ratings for a vehicle you own. Rate your car on Performance, Safety, Features and more.
Write a Review
For 2013 Lexus IS

Very happy with my Lexus IS