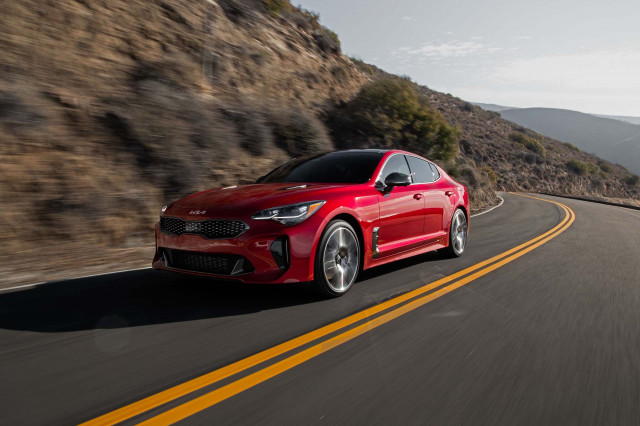 The Kia Stinger is a four-door, rear- or all-wheel-drive that bends genres and expectations around its curvy body. It's a luxury sedan, sport sedan, or grand-touring sedan—or hatchback.

The Stinger brings to the market a new nameplate for the 2018 model year, and while it's a little larger than establishment rivals like the BMW 3-Series and Mercedes-Benz C-Class, the Stinger offers similar power and a rear- or all-wheel drive powertrain. It's that last bit that helps the Stinger stand apart from the front-drive Kia Optima since the two are sized about the same outside.

The Stinger is powered by a turbo-4, while Kia reserves its new twin-turbo 3.3-liter V-6 for the Stinger GT.

For 2019, Kia made blind-spot monitors standard, and it earned the IIHS' Top Safety Pick+ award.

Kia refreshed the Stinger for 2022, equipping it with a more potent base engine, more standard driver-assist features, and a standard 10.3-inch touchscreen. The 2021 Stinger's base 255-hp 2.0-liter turbo-4 was swapped for a 2.5-liter turbo-4 that makes 300 hp and 311 lb-ft and goes 0-60 mph in 5.2 seconds. Automatic emergency braking, active lane control, and blind-spot monitors came standard for 2022.

With its Euro-esque styling, the Stinger looks like it could have emerged from a German automaker. And it was engineered in Europe, too; Kia says that much of its final chassis development was completed at Germany's famed Nürburgring racing circuit. That's pretty standard for brands like BMW, Cadillac, and Jaguar, but it's new ground for Kia.

The Stinger's long hood and short rear overhang are classic rear-wheel-drive design elements—something that Kia has largely imitated but not had the goods to back up until now. Inside, it's also clearly inspired by Germany's best; certain elements of Mercedes-Benz's current design language show through, in particular. Even though it's from what was once a budget brand, the Stinger looks and feels positively upscale inside. Ample use of nappa leather and soft metallic surfaces elevate its interior materials and there is considerable attention to detail absent in more mainstream models in Kia's lineup—like the company's mid-size Optima, for instance.

While the Optima is sized about like the Stinger outside, the two cars are after very different buyers. The Stinger shoots for enthusiast drivers instead of the center of the market.

The Stinger comes standard with rear-wheel drive and a limited-slip differential is available, while the snow-friendly all-wheel-drive system comes with brake-based torque vectoring that clamps down on the inside rear wheel to send the power to the outside wheel and help the car rotate through turns. The Stinger’s suspension is a fairly conventional setup: MacPherson struts up front and a multi-link setup out back. The V-6 model also features four-piston front brakes supplied by Brembo.

In terms of safety, the Stinger is available with automatic emergency braking, adaptive cruise control, active lane control, and even a fatigue sensor that sounds alerts if it detects a tired driver.

Rate and Review your car for The Car Connection! Tell us your own ratings for a vehicle you own. Rate your car on Performance, Safety, Features and more.
Write a Review
2018 Kia Stinger Base AWD

GREAT CAR, EVERYTHING YOU EXPECT.