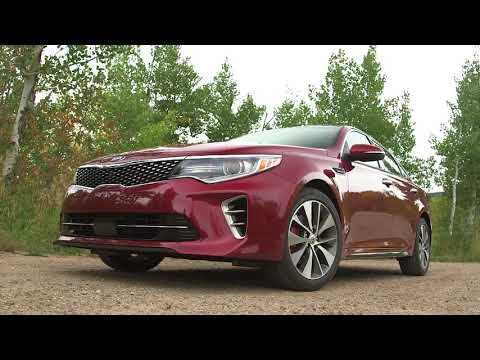 The Kia Optima is the automaker's popular mid-size sedan that squares off in an ultra-competitive class.

With the Optima, Kia competes against best sellers like the Honda Accord and Toyota Camry, not to mention the Ford Fusion, Nissan Altima, Mazda 6, and Chevy Malibu, as well as its mechanical cousin, the Hyundai Sonata.

The newest Optima was introduced for the 2016 model year as a bona fide contender among mid-size sedans. For the 2019 year, automatic emergency braking became standard and the Optima's styling was modestly updated, while Hybrid and Plug-in Hybrid models carried over nearly unchanged. Kia shuffled some options and features in the Optima for 2020, but made no substantial changes.

A new Optima arrived for 2016. Styling for the new Optima is slightly less dramatic than before, while the car itself is slightly wider, with a touch of extra wheelbase length. The cabin is slightly restyled, and has much more in common with the related Hyundai Sonata than before.

The latest Kia Optima benefited from the dual-clutch automatic transmission offered in the Hyundai Sonata Eco model. Like the Sonata, the new Optima offers a 2.4-liter inline-4 as well as two turbo-4s, a 1.6-liter and 2.0-liter. Kia claims increased torsional rigidity and improved sound suppression.

Today, the Optima shares an assembly plant in West Point, Georgia, with the Kia Sorento, though Optima Hybrid sedans are made in South Korea. A new S trim level joined the lineup for 2018. The following year, the Optima's styling was updated (squint and perhaps you'll see the differences), but the big and worthwhile change was its newly standard automatic emergency braking.

With the first-generation Optima, Kia reached beyond its usual crossover and hatchback offerings to take on the mainstream mid-size sedan market. From 2000 to 2005, Kia was still in its infancy in the U.S., and as a result, the Optima was substantially the same as the Hyundai Sonata, save for some cosmetic differences. It was offered with a 4-cylinder engine, and wore a small grille that differentiated it from the Sonata.

For the second generation, the 2005-2010 Kia Optima had styling that more distinctly separated it from its Hyundai cousin. In 2008 it received a revised look influenced by new design director Peter Schreyer, as well as updates to equipment including Bluetooth and satellite radio. It remained a compact to mid-size sedan, but in the second generation it added an optional V-6.

These models came with either a 175-horsepower, 2.4-liter inline-4 or a 194-hp, 2.7-liter V-6. The 4-cylinder returned better fuel economy, while the V-6 didn't offer much more power, so we did recommended the base engine. While this Optima wasn't a style leader, it did have a spacious interior and an airy feel, with good outward visibility. Safety ratings were good; front side airbags came standard, along with side-curtain airbags covering both rows, and active headrests for front-seat occupants.

The 2011 Kia Optima was new. The sedan was longer, wider and lower than before—and much more attractive, with some of our editors liking the Optima's look better than that of the Sonata.

The Optima shared the Sonata's powertrains, including a 200-hp, 2.4-liter direct-injection inline-4, a 274-hp, 2.0-liter turbo-4, and a new hybrid model. Fuel economy ratings for the base engine were as high as 35 mpg highway, and up to 40 mpg for the Hybrid. Though thrifty, the gas-electric model's behavior left it a tier below the more refined performance of Toyota and Ford hybrids.

The Optima's standard and optional features lists were stronger than for those of most other mid-size sedans in this price range. Bluetooth and a USB port were included even on base models, the mid-level EX trim offered dual-zone climate control and a smart-key system, and top options included Infinity audio, leather upholstery, and heated rear seats. A navigation system was available, as was UVO, an enhanced system for smartphone connectivity.

No major changes were made to the Optima for 2013, although late in the model year the Hybrid model saw some driveability updates and mileage improvements, with its EPA numbers now coming in at 35 mpg city, 39 highway. In 2014, the four-door was given a small revamp that included some aesthetic tweaks up front, upgrades to the infotainment offerings, and cross-traffic alerts as well as blind-spot monitoring.

The 2011-2013 Optima Hybrid was one of a group of cars that have been found to have overstated fuel-economy numbers. Kia initially submitted figures of 35 mpg city, 40 highway, 37 combined to the EPA, which allows automakers to self-certify fuel economy. On a confirmation check of several vehicles, the EPA found the Optima Hybrid's actual tested fuel economy to be 34/39/36 mpg. Owners can register with Kia to receive reimbursement for the gas consumed above and beyond expected levels; more details are found at KiaMPGInfo.com.

For 2015, the Optima received the latest version of Kia's UVO infotainment system.

Rate and Review your car for The Car Connection! Tell us your own ratings for a vehicle you own. Rate your car on Performance, Safety, Features and more.
Write a Review
2019 Kia Optima S Automatic

I opted for the optional passion red paint and I really like it. It's a solidly built vehicle with quality components. I do miss the CD player. I would recommend this car to anyone. + More »
people found this helpful.
Was this review helpful to you? Yes
2018 Kia Optima SX Automatic

It will be hard to replace my 2013 Kia Optimal SXL

Another great Optima from KIA