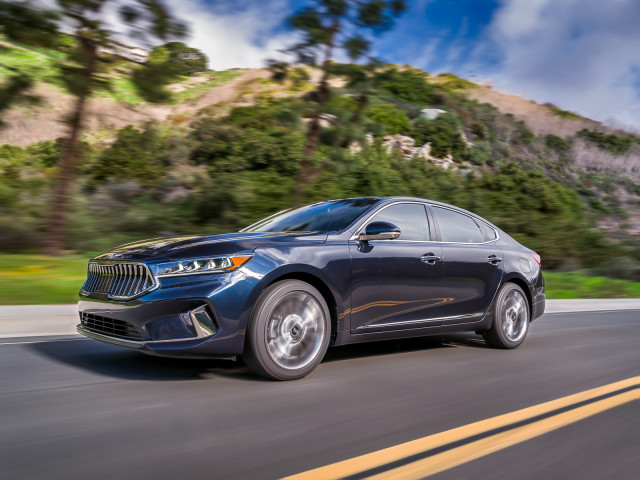 The Kia Cadenza is a full-size sedan that sits atop the automaker's lineup, along with the Kia Stinger.

Kia has pushed its Cadenza full-size four-door sedan slightly upmarket with a 2017 redesign that addresses some of the previous model's shortcomings with a new, more cohesive style and a vastly improved interior.

With the Cadenza, Kia may be looking to siphon near-luxury buyers away from brands such as Buick and Volvo.

It's unchanged for the 2019 model year, save for minor feature packaging. Kia updated the Cadenza for 2020 with a new front end, a revamped dash, more standard active safety features, and a large infotainment screen.

A full redesign for 2017 brought a more dynamic look inside and out, a stiffer structure, and an 8-speed automatic transmission that improved both performance and fuel economy. Its 3.3-liter V-6 was lightly updated, despite a modest power drop to 290 horsepower and 253 pound feet of torque. That's more than made up for by a slightly lower curb weight and the 8-speed automatic, however.

Though its styling is derivative of its predecessor, the K900 is altogether more cohesive-looking inside and out. Its detailing is particularly nice, with a concave grille and more subtle use of chrome than we've seen on a high-end Kia in a while.

Kia expanded availability of automatic emergency braking on the updated Cadenza, making it standard on the Technology and SXL trim levels (although it's not available on the Premium).

All Cadenza sedans come equipped with leather upholstery, a 7.0-inch touchscreen for infotainment, Bluetooth connectivity, automatic climate control, and a suite of smartphone apps that unlock the car.

At launch, Cadenzas were powered by a 293-hp, 3.3-liter V-6; a 6-speed automatic transmission that sent the power to the big car's front wheels. The engine checked in with 255 lb-ft of torque, but the peak doesn't occur until high up in the rev range, making the engine feel weaker than its ratings would suggest. The transmission made the best of this, however, and also included a manual-shift gate for drivers. While it looks sporty, the Cadenza has always been tuned more for comfort.

For the 2016 model year, the Cadenza gained a new base model, while navigation became standard across the lineup. Blind-spot monitors were added to the Luxury package.

Rate and Review your car for The Car Connection! Tell us your own ratings for a vehicle you own. Rate your car on Performance, Safety, Features and more.
Write a Review
For 2015 Kia Cadenza

It can take a beating!

My few complaints are the paint chipping around the rear windows' on sides fairly soon after I drove it off the lot, brand new. And I have hard water spots when I bought it and they're very hard to get rid of even today (It's black). I live in Florida and miss the air conditioned seats!!! It has heated seats and I've accidentally turned them on a few times not realizing, because it's so hot here, but there's really no need for heat in Florida.

Other than the continuous bad luck I've had with this car, it's not due to the car or it's performance. I'll probably get another one. + More »
people found this helpful.
Was this review helpful to you? Yes
2015 Kia Cadenza 4-Door Sedan Limited

CPO is the way to go