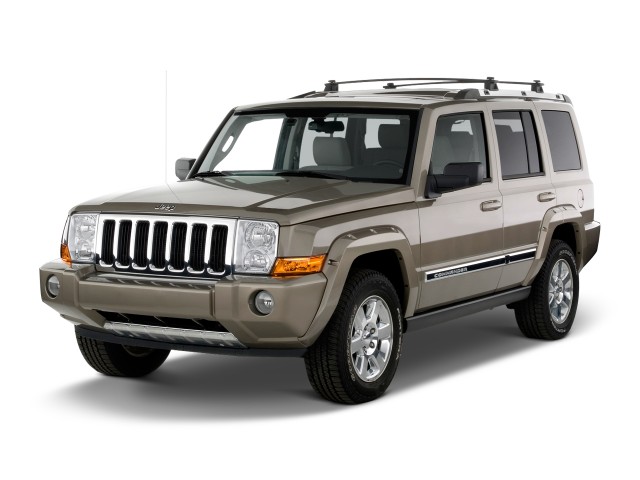 The Jeep Commander is a mid-size, three-row sport-utility vehicle that originally hit the market as an alternative to the Ford Explorer, Toyota 4Runner, Nissan Pathfinder, and Honda Pilot—as well as the Jeep Grand Cherokee, on which it was based.

A bigger, boxier Jeep with three rows of seating sounded like a certain success in the market more than a decade ago when the Commander was originally conceived. But the relative failure of the Jeep Commander to sell well past its first year or two serves to illustrate a couple of points: The market is constantly changing; and interior packaging matters tremendously in any kind of family vehicle.

The Commander is likely to catch your eye, whether from a distance or up close. It’s a handsome vehicle from the outside, with the boxy, muscular appearance that a certain kind of SUV buyers still want. With the Jeep seven-slot grille in front and rather minimal sheetmetal styling, whether in profile or in detail, it impresses as rugged. Inside, the squared-off dash houses round gauges that fit cohesively together with the exterior.

That exterior design, along with a solid set of underpinnings shared with the Jeep Grand Cherokee, are the two best things about the Commander. Inside, the amount of passenger space available is disappointing, with an odd elevated seating position in the first two rows that limits headroom and then squeezes headroom and legroom in the third row.

For most of the Commander’s production run there were three engines. The base 3.7-liter V-6 made just 210 horsepower and was made the Commander feel coarse and underpowered; all but 2010 models also offered a 4.7-liter V-8 that was a reasonably quick, confident pick. The 357-hp Hemi 5.7-liter V-8 at the top of the lineup can move this vehicle quickly and gets better mileage than the 4.7 due to a cylinder-deactivation system. From the V-6 all the way up to the Hemi, expect real-world city mileage in the low to mid teens, and EPA ratings even for the base V-6 were 15 mpg city, 20 highway.

Off-road prowess was fully on board for the Commander, and with three different four-wheel drive systems it could take on most off-road situations owners took it out to; many of the models came with a low range as well. The Commander wasn’t nearly as deft on the road, though, and tight turns will have you slowing for lots of body roll. Ride quality isn’t nearly as good as that of larger crossover models, either.

The Commander was hit particularly hard by Americans’ loss of interest in SUVs in the late ‘00s, and sales dwindled after 2007—which is why you’ll still find far more 2006-2008 Commanders on the used market than 2009-2010 models.

On-again, off-again rumors have persisted supporting that Chrysler is planning a new model in the Commander’s market position, by resurrecting the Jeep Grand Wagoneer name in an extended-wheelbase, three-row vehicle based on the Grand Cherokee.

Be the first one to write a review on 2010 Jeep Commander
Rate and Review your car for The Car Connection! Tell us your own ratings for a vehicle you own. Rate your car on Performance, Safety, Features and more.
Write a Review