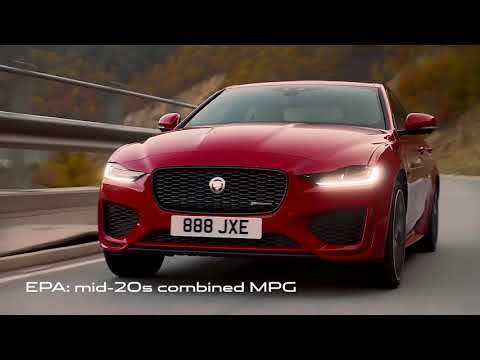 The Jaguar XE is a compact luxury sedan. It shares much of its style and running gear with the larger XF, including some of its engine options.

In size, details, and mission, the Jaguar XE is a rival for BMW's 3-Series, down to the familiar echoes that appear in the Jag's roofline. The Cadillac ATS is also a worthy rival, as is the new Mercedes-Benz C-Class and the Audi A4.

With the XE, Jaguar has a small luxury sedan for buyers uninterested in crossovers—if any are left.

For 2018, Jaguar subbed in its new turbo-4 under the hood in two tunes: 247 horsepower or 296 hp. For 2019, Jaguar added CarPlay compatibility and made a 10-inch touchscreen standard.

In the 2020 model-year XE, Jaguar made the turbo-4 powertrain standard across the board, in 247-hp or 296-hp output. LED headlights gave it a new front-end appearance, the cabin received more soft-touch trim, and a new infotainment system with dual screens replaced the older, smaller-screened system.

The BMW influences are clearest in the Jaguar XE's side view, where it might do a better job even than the 3-Series in summing up the customary sport-sedan look. It's better here, through the kinked roofline, the F-Type-alike tail, and in the pronounced Jaguar nose, decorated on the supercharged S model with a mesh grille and big air intakes. The bling is kept in check, save for chromed fender vents and 20-inch wheels—all the better to play up its low, 0.26 coefficient of drag.

The cabin is trimmed in a choice of aluminum, wood, or piano-black trim, and dials up a suitably sporty looks that's not as glitzy as the cockpits of the big XJ and XF sedans. A rotary transmission control dominates the center console, and gauges styled like those on the F-Type are framed by a thick steering wheel.

In the XE, the body forms around what Jaguar describes as a long wheelbase and a low seating position. Interior space is good in the front, but slim in the back seat, along the lines of the Cadillac ATS.

The XE is built on a new modular aluminum architecture that will eventually see wide adoption within Jaguar Land Rover. The company currently builds its larger vehicles, the XJ and Range Rover, on their own dedicated aluminum chassis, but this modular will see use on the XE, the next XF, the F-Pace crossover, and likely some smaller forthcoming Land Rover models. The XE's aluminum body reduces weight which in turn pays dividends in fuel economy and performance.

The XE was initially offered with three different engines. In XE 25t form, it bore a 2.0-liter turbo-4, making 240 horsepower and 251 pound-feet of torque. An XE 35t model, with Jaguar Land Rover's well-known supercharged 3.0-liter V-6 fitted under the hood, made 340 hp and 332 lb-ft of torque. An XE 20d had a 2.0-liter 4-cylinder turbodiesel, making 180 hp and 318 lb-ft and based off the same Ingenium architecture as the XE 25t's gasoline inline-4. The XE 20d and 35t offered all-wheel drive, while rear-wheel drive was otherwise standard across the board.

That turbo-4 survives as the only engine in the 2020 XE sedan, which still offers all-wheel drive in 247-hp trim and only comes with AWD as a 296-hp R-Dynamic model. The sole transmission is a ZF 8-speed automatic.

Under the aluminum skin, the Jaguar XE rides on a double-wishbone front suspension partly composed of aluminum, while the rear suspension uses a multi-link setup. Electric power steering is a Jaguar first on the XE.

In addition to its stiff, aerospace-inspired body structure, the XE depends on new active and passive safety equipment to provide state of the art protection. Along with the usual airbags and stability control, the XE has a new traction-control system that uses sensors to determine power application below 19 mph for better launches. Other safety features include adaptive cruise control, blind-spot monitors, parking assist, a laser-projected head-up display, and an autonomous braking system that uses stereo cameras for obstacle detection.

Jaguar has finally given its aging infotainment suite a complete overhaul, and the XE sports its new InControl system. It combines the usual items—USB connectivity, audio and voice streaming over Bluetooth, navigation using SD-card mapping data, and connectivity features like mobile hotspot capability. There is also an InControl remote app that lets drivers perform some functions from their smartphone, such as remote starting and locking or unlocking the vehicle, and the system is also compatible with Android Auto and Apple CarPlay.

Be the first one to write a review on 2020 Jaguar XE
Rate and Review your car for The Car Connection! Tell us your own ratings for a vehicle you own. Rate your car on Performance, Safety, Features and more.
Write a Review