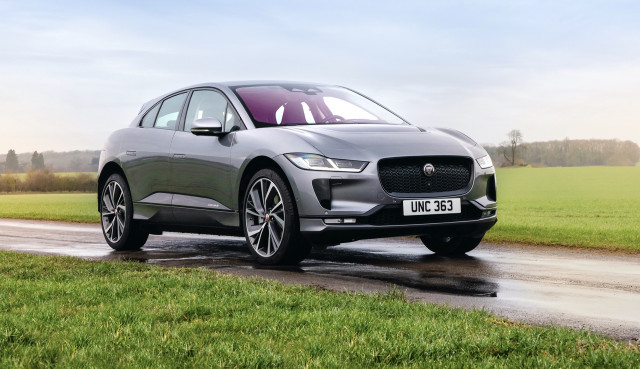 The Jaguar I-Pace is the British luxury automaker’s first all-electric vehicle and the first to challenge Tesla for luxury EV money.

The I-Pace went on sale in 2018. In the U.S., it costs more than $70,000 to start, before federal tax credits and any applicable state incentives are applied. The I-Pace is powered by a 90-kwh battery, with an EPA-rated range of 234 miles.

It was a finalist for the Best Car To Buy 2019 award from Green Car Reports.

With the I-Pace, Jaguar has a toe in quickly rising waters; luxury automakers such as Mercedes-Benz, BMW, and Audi have announced plans for an onslaught of luxury electric vehicles in coming years. Much smaller than those automakers, Jaguar beat them all to the punch.

The I-Pace was new for the 2019 model year and carried over to 2020 with no significant changes. After skipping the 2021 model year, the I-Pace returns for the 2022 model year with a new Pivi Pro infotainment interface that should be quicker than its laggy predecessor. Jaguar has also made thermal improvements and altered the default distribution for the dual-motor drive system, in hopes of improving efficiency—although the EPA range hasn't changed. A new higher-amp onboard charger is expected to cut the previous 13-hour charge times at 240V down to the vicinity of 9 hours.

The I-Pace takes some familiar cues from the rest of Jaguar’s lineup, and wraps them around a new, electric-vehicle architecture. The I-Pace isn’t an electrified version of the F-Pace or E-Pace crossovers—it’s wholly separate.

The electric crossover may read more as a tall wagon to some shoppers, certainly within Jaguar’s design purview. Where the I-Pace diverges is in its execution: the wave-like body lines crest and fall around the front and rear wheels; the cab-forward design differs from any conventionally powered Jaguar so far; and the door handles recess into the body and automatically extend to greet passengers.

Inside, the I-Pace features a version of the automaker’s 12.3-inch touchscreen infotainment system and touch controls for vehicle functions and climate controls. Despite its futuristic drivetrain, the I-Pace eschews minimalist design inside for something that may be more recognizable to most drivers.

A pushbutton transmission commands the electric driveline that consists of two electric motors, one for each axle, that produce 394 horsepower combined. The I-Pace will be all-wheel drive and, thanks to the battery placement under the floor, will feature an ideal 50:50 weight distribution. That latter figure may appeal to performance car buyers who’ve made the mental shift to electric performance—Jaguar looks to help more of those buyers along with an announced racing series composed entirely of I-Pace crossovers.

Recharging the battery in the I-Pace up to 80 percent may take as little as 40 minutes, according to Jaguar. Early adopters in the U.S. may have a hard time doing that: that charge time is based on some 100-kw fast chargers that are slowly rolling out across Europe. Stateside, 50-kw fast chargers are more common, and Jaguar said the I-Pace could recharge a depleted battery to 80 percent in 85 minutes.

Be the first one to write a review on 2022 Jaguar I-Pace
Rate and Review your car for The Car Connection! Tell us your own ratings for a vehicle you own. Rate your car on Performance, Safety, Features and more.
Write a Review