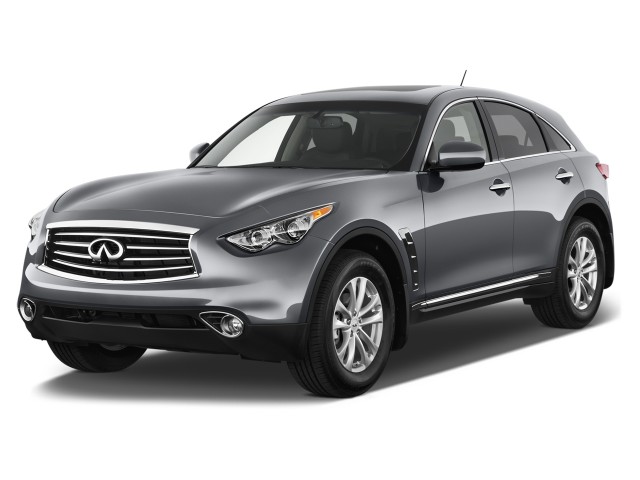 When it launched in 2003, the Infiniti FX was a remarkable and entirely new kind of crossover utility vehicle. Since that time, has stayed true to its roots as an aggressively styled, performance-focused utility vehicle that sacrifices some passenger and cargo space for excellent handling and a more car-like feel.

The FX was restyled and updated for the 2010 model year. But for 2014, the vehicle formerly known as Infiniti FX gains a new model name--it is now the Infiniti QX70--as part of a totally revised Infiniti model naming strategy. New name aside, the FX / QX70 has changed relatively little since its 2010 overhaul. The FX range got a light touch-up for 2012, with a different grille and front end design; otherwise, a Limited Edition model added huge 21-inch graphite finish wheels, among other things. Advanced-tech items like lane-departure warning, adaptive bi-xenon headlamps, and an adaptive suspension remained standout options—if you're willing to add thousands to the price, that is.

While it had few competitors at the time--including the Porsche Cayenne and Mercedes ML55 AMG--a wide range of more sporting utility vehicles has now joined it. Those include the Acura RDX, the Audi Q7, and the Land Rover Range Rover Sport.

From 2003 through 2009, the FX was offered in rear- or all-wheel drive models of the FX35 (V-6) and in all-wheel-drive only for FX45 or FX50 (V-8) models. The FX35 made a respectable 275 horsepower, while the FX45 made 320 horsepower (with a more noteworthy 335 pound-feet of torque). The interior for all of these FX models is beautifully trimmed and comfortable, though cargo space it rather limited due to the tucked-down roofline. Unlike some other crossover vehicles its size, the FX doesn't offer three rows of seating; five adults can just barely fit in the FX.

Driving the FX is not like piloting any normal SUV, or even comparable to most crossover vehicles. It has a very firm suspension and feels planted in corners, with very little lean and almost none of the squat or dive with quick acceleration or stops, as you tend to find in taller vehicles. Off-roading isn't at all part of the FX's vocabulary, either; it's strictly an on-road vehicle. Some might find that the FX has too harsh of a ride, if rough-surfaced roads are part of normal driving.

Those who want the most sport-sedan-like feel out of the FX will likely want to stick with rear-wheel drive. First-generation models with all-wheel drive don't steer quite as responsively, and they weigh noticeably more. TheCarConnection.com's editors actually thought the V-6, rear-wheel-drive version of the FX35 is the best-balanced, though the FX45 (or FX50) is definitely fun with all the power and torque on tap—as well as the burly, burbly V-8 sound. In any of the versions, fuel economy is not at all anything to be proud of; you'll be hard-pressed to eke 20 mpg out of the V-6 model, even.

For 2009, Infiniti redesigned the FX, boosting the FX35 to 303 horsepower and the V-8—now called FX50—to 390 horsepower. Although the packaging of the FX didn't change (and some of the same flaws, like the lack of back-seat space, carried over), this second-generation version received curvier interior styling—especially for the instrument panel—and the exterior includes new sheetmetal including a curvier hoodline and lower grille. A new seven-speed automatic transmission and magnesium paddle-shifters helped give it even more enthusiast appeal, and ride quality and refinement have been upgraded.

Rate and Review your car for The Car Connection! Tell us your own ratings for a vehicle you own. Rate your car on Performance, Safety, Features and more.
Write a Review
For 2012 INFINITI FX

If 2004 model still getting "Wow!" remarks from passerts-by, can beat even a Porsche on the highway and didn' broke down a single time - it isa good investment. - it's a good investment

Solid, powerful, reliable. Elegant and timeless. The keeper.
people found this helpful.
Was this review helpful to you? Yes
See More Reviews