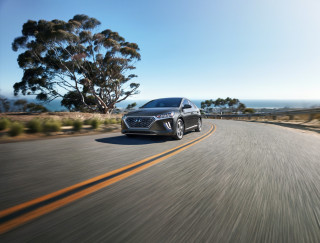 The Hyundai Ioniq is a compact hatchback that's efficiency-focused through and through. It has offered a choice among three electrified powertrains—although one of those has been cut from the lineup for 2022.

The first, and most popular, hybrid hatchback debuted in 2017. A battery electric vehicle followed closely behind, although its availability is limited, and a plug-in hybrid powertrain was released for the 2018 model year.

For 2022, the Ioniq Electric is no longer part of the lineup, potentially to avoid confusion—and being completely outmoded, perhaps—by the smart-looking, long-range 2022 Hyundai Ioniq 5 crossover that leads the way to Ioniq becoming a multi-faceted sub-brand for Hyundai.

Other Ioniq models carry over to 2022 with few changes. For 2020 Hyundai updated the styling of the Ioniq and added more battery capacity to the Electric model. Only paint colors changed for 2021.

The hybrid Ioniq competes with the Toyota Prius, and Hyundai has managed to beat that car's EPA ratings for fuel economy. It's also a rival for the similar Kia Niro. The electric Ioniq, on the other hand, faces off against the Chevy Bolt EV and Nissan Leaf, while the plug-in hybrid model goes against the Toyota Prius Prime.

A few of the Ioniq's underpinnings are derived from the Elantra compact sedan, but the greener model is a dedicated design, meaning there's no version with only a gasoline powertrain. Hyundai has deliberately given the Ioniq a conventional design, within the shape of a high-tailed five-door hatchback with an aerodynamically slippery shape. Hyundai's trapezoidal grille is flanked by headlights that sweep back into the fenders. The windshield is steeply raked, and a horizontal crease along the flat body sides has none of the curves and dips of other alternatively-powered vehicles. The Ioniq is no Toyota Prius or Nissan Leaf: it may pass unnoticed in traffic, and that's by design.

The two hybrid versions of the Ioniq are powered by a direct-injected 1.6-liter inline-4 putting out an estimated 104 horsepower and 109 lb-ft of torque. In the conventional hybrid, a single 32-kilowatt (43-hp) electric motor sits between the engine and a 6-speed dual-clutch automated transmission. Maximum output of the powertrain is 139 hp, and it drives the front wheels. The hybrid's 1.6-kilowatt-hour lithium-ion battery pack recaptures otherwise wasted energy, returning it to power the electric motor, which can supplement the engine torque or power the Ioniq by itself under light loads at low speeds. The plug-in hybrid version for 2018 has a more powerful motor, at 45 kw (60 hp), with an estimated range of 27 miles or more from its 8.9-kwh battery pack.

The battery-electric Ioniq has several differences from the other two. Its grille is replaced by a blanking panel that gives it visual distinction. Inside, conventional shift and parking-brake levers on the tunnel are replaced with a set of buttons and a controller for the interactive vehicle-information display. The 28-kwh battery pack is sited under the rear seat, between the rear wheels, and under the load bay. The Ioniq Electric is rated for more than 120 miles of range, and it's driven by an 88-kw (120-hp) electric motor. The regenerative braking system on all versions is Hyundai's third-generation system, said to offer better a blending of friction and regenerative brake force as the car slows.

In terms of safety, the Ioniq has seven airbags, and includes as standard or optional equipment a long list of the latest active-safety systems, including blind-spot monitors with rear cross-traffic alert, lane-departure warning, adaptive cruise control, and automatic emergency braking with pedestrian detection.

The Ioniq Hybrid's better-than-Prius looks and fuel economy, and the Ioniq Electric's 124-mile electric range, would have put the car toward the top of those segments two years ago. But the 2016 Toyota Prius turned out to have considerably improved driving behavior and roadholding—if even more bizarre looks than previous Priuses. And the 2017 Chevy Bolt EV simply reset the bar for affordable electric hatchbacks; it has almost twice the range of the electric Ioniq for about $7,000 more. Hyundai executives in South Korea have said a higher-capacity battery is on the way.

The 2019 Hyundai Ioniq is largely identical to the 2018 version, with the exception of more widely available automatic emergency braking.

In 2020, the battery in the Ioniq Electric grew to 38 kwh, which boosted the range of the vehicle to 170 miles, according to Hyundai.
Stay up-to-date
Get email updates about this model, including new reviews, price changes, new incentive and rebates.
Thank you!
We will notify you when reviews, news, and incentives are released for this vehicle.

Rate and Review your car for The Car Connection! Tell us your own ratings for a vehicle you own. Rate your car on Performance, Safety, Features and more.
Write a Review
For 2018 Hyundai Ioniq