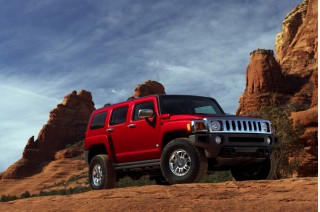 GM's HUMMER brand had launched with lots of fanfare--and controversy--in the early years of this century. It struck a nerve and a vein with the original H2, but had always envisioned adding smaller HUMMER vehicles to the brand. That addition became reality in 2005, when the HUMMER H3 joined the fledgling lineup.

Sold from 2005 to 2010, the H3 arrived in HUMMER's Quonset-hut showrooms just as war-weary Americans were turning away from the H2 and the brand. Sales were slumping--but the H3 was seen as the right vehicle, at the right time. It certainly looked the part, with HUMMER's brazen grille (it had been part of a lawsuit with Chrysler's Jeep brand--both had common roots and a seven-bar front end) and squared-off fenders.

Underneath, though, the H3 was no military offshoot like the H1, not a full-size beast like the H2. It was spun from the architecture that founded GM's small pickups, the Chevy Colorado and GMC Canyon. It shared their lackluster powertrain--a dated in-line five-cylinder engine with 220 horsepower and 225 pound-feet of torque. Hauling around the 4700-lb H3 proved more than the 3.5-liter engine could comfortably hustle: 0-60 mph times were pegged at 10.3 seconds. Fuel economy of 20 mpg highway clearly outpaced the H2’s 11 mpg.

The bulky HUMMER was only six and a half inches narrower than the bigger H2, but it was nearly 17 inches shorter, which showed in its meager interior space.

Where the H3 truly lived up to its reputation was off-road. It had 9.1 inches of ground clearance and with available 33-inch off-road tires, the H3 had truly awesome off-roadability. All H3s came standard with an electronically controlled four-wheel-drive system with traction control and underbody shielding; a rear locking differential was an option.

As GM descended into financial straits, HUMMER updated the H3 first with a bigger engine--at 3.7 liters, the five-cylinder made 242 hp in the 2007 model year. A 5.3-liter V-8 was added for the 2008 model year, stuffed into a new model dubbed the H3 Alpha; it was good for 295 horsepower and 317 pound-feet of torque, delivered through a heavy-duty four-speed automatic transmission and four-wheel drive. The drivetrain boosted the H3's towing capacity to 6,000 pounds.

A pickup-bed version was added for the 2009 model year, but the writing was on the wall for the division. GM filed for bankruptcy in 2009, and attempted to sell the brand to Chinese owners, Sichuan Tengzhong. When that company failed to receive approval from the Chinese government for the transaction, GM shut down HUMMER, building the final H3 in May of 2010.

Rate and Review your car for The Car Connection! Tell us your own ratings for a vehicle you own. Rate your car on Performance, Safety, Features and more.
Write a Review
2006 HUMMER H3 4-Door 4WD SUV

Fantastic for driving in snow, high clearance, bad on gas, but prices are coming down. :) No new HUMMER H3s, gone down in GM history with the SATURN and OLDSMOBILE! :(
people found this helpful.
Was this review helpful to you? Yes