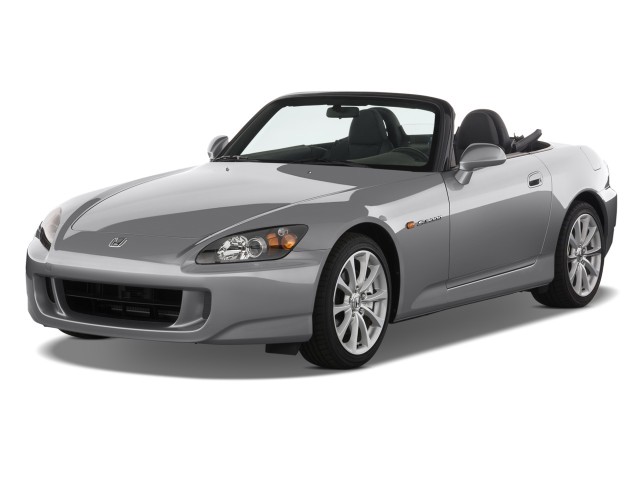 We've called the S2000 "one of the least practical mass-production cars on the planet." That's not entirely a bad thing. What the S2000 sacrificed in cargo space, interior room, and even a well-organized cockpit, it paid back in brisk acceleration, endlessly entertaining handling, and some of the best four-cylinder engine sounds ever generated by a Honda. By the time it was discontinued, it cost more than $30,000--but the rear-wheel-drive S2000 still draws knowing glances from enthusiasts.

Over nearly a decade, the Honda S2000 was one of those rare cars that charmed drivers regardless of its shortcomings. A roadster in the strictest of senses, the S2000 had a folding fabric top and two seats--all the better to soak up the snarling sounds from its 237-horsepower, 2.0-liter four-cylinder engine, and its maniacal 9000-rpm redline.

The on-paper output wasn't stunning, but given the S2000's low curb weight, its performance was stunning. A six-speed manual transmission was the only gearbox offered. In 2004, the engine was upsized to 2.2 liters for the same output, but better torque at the low end, which dropped its redline to--only--8200 rpm.

The S2000's handling was best described as amazing. Independent at all four corners, the S2000 was essentially set up to be a track car; it's easy to predict few surviving into old age, since so many have become just that, weekend racing toys.

The high-performance roadster added electronic throttle control and stability control for 2006. A refreshed interior added standard headrest speakers and an outside temperature gauge.

Unfortunately, as it had done with the Acura NSX, Honda let the S2000 go to seed, without any major updates to its styling. Respectable 18/25-mpg fuel economy aside, the S2000 didn't offer the kind of creature comforts or driving ease that would attract a wider audience. Uncharacteristically for Honda, the controls were laid out in haphazard fashion, and plenty of black plastic was used to trim the cabin.

In its last year, Honda accepted the car's small niche and introduced the S2000 CR, a club-racer version. Along with an aerodynamic body kit, the S2000 CR also added high-performance Bridgestone tires, even firmer suspension settings, and new wheels.

The S2000 was discontinued after the 2009 model year.
Stay up-to-date
Get email updates about this model, including new reviews, price changes, new incentive and rebates.
Thank you!
We will notify you when reviews, news, and incentives are released for this vehicle.

Rate and Review your car for The Car Connection! Tell us your own ratings for a vehicle you own. Rate your car on Performance, Safety, Features and more.
Write a Review
2009 Honda S2000 2-Door Convertible

Outstanding sports car that has Italian good looks and performance, with Japanese reliability and simplicity.

An outstanding sports car that has Italian good looks and performance, with Japanese reliability and simplicity. Absolutely it is the best of both worlds, with exclusivity to boot.
people found this helpful.
Was this review helpful to you? Yes
2008 Honda S2000 2-Door Convertible CR w/Air Conditioning

One of the least expensive to maintain, high performance sports cars on the planet!