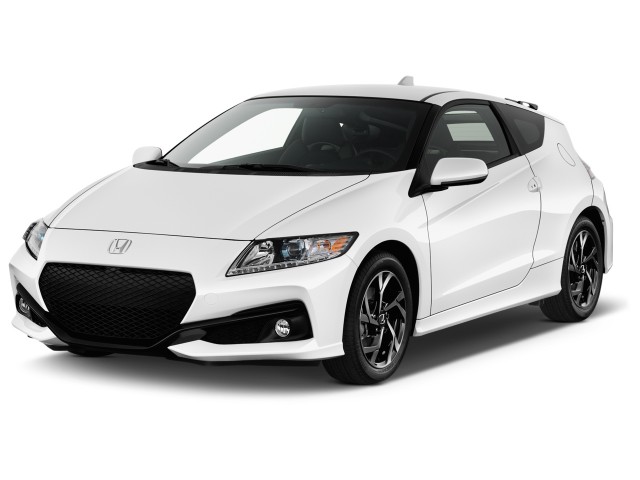 With just two seats, the Honda CR-Z is intended to be a sporty hybrid. Accentuating its sporty intent, it has a low-slung cabin and an available manual transmission for more driver involvement in the fuel-efficient process.

Competitors for the CR-Z are few and include the Hyundai Veloster, MINI Cooper Coupe, and the Fiat 500 Abarth, but none of those are hybrids and all offer at least some kind of back seat, even if it is compromised.

The CR-Z is closely related to the brand's Insight hybrid hatchback, which was discontinued after the 2014 model year.

The CR-Z was discontinued by Honda in June 2016.

In 2016, Honda refreshed the CR-Z's styling with a reshaped front fascia that includes a more angular, eight-point grille, and a front diffuser. It also added new side sills, and a new alloy-wheel design. Inside, standard equipment now includes push-button start, a center console with armrest, an electronic parking brake, and a Display Audio entertainment system with 7.0-inch touchscreen. Honda's LaneWatch safety system is now available on all but the base LX model, while heated leather seats and navigation are offered on the top EX-L only.

From a styling perspective, the CR-Z evokes the design heritage of Honda's famed CRX coupe of the 1980s and 1990s. Sales of the new CR-Z have hardly been stellar, and the CR-Z turns out to face a kind of existential crisis: it's neither the most efficient two-seat car nor the sportiest. In working to balance between those two qualities, Honda has built a car that's not top of the class for either classification.

The Honda CR-Z was introduced as a new model for 2011, and for 2013, Honda gave it a mild freshening with a new grille and bumper, revised front styling, an air inlet molding, and daytime LED running lights in the headlamps.

Opinions on the CR-Z's design vary. Some feel the little hatchback looks great, while others see the CR-Z as nothing more than a squashed two-door Insight, with a tall hoodline and incoherent interior themes. Honda aficionados will recognize the two-level instrument panel in the CR-Z, but its colors and shapes are edgier than what has found in the Insight, and your choice of performance mode—and driving style—will change the colors of the gauge cluster, from green (most efficient) through blue to red (highest output, lowest gas mileage).

The CR-Z's 1.5-liter 4-cylinder engine is mated to Honda's Integrated Motor Assist (IMA) hybrid system, giving a combined peak output of 130 horsepower. As in the Insight and the Civic Hybrid, the IMA hardware is technically a mild-hybrid system since it can't move the vehicle from a stoplight on electric power alone. The mild-hybrid system can power the CR-Z for very short distances on electrons alone, but only under limited, specific circumstances.

Honda's mild-hybrid IMA system has been around for several years in a handful of models and the CR-Z is the low-volume member of the group. The IMA equipment includes a small electric motor that restarts the 1.5-liter engine after stops and contributes additional torque under heavy load. The helper motor allows fitment of a smaller engine than would otherwise be needed in the vehicle.

The CR-Z was updated for the 2013 model year, with the most important improvements going to the engine and hybrid system; the engine was retuned to boost its output to 119 horsepower, and the electric motor was enlarged from 10 kilowatts (15 hp) to 15 kW (22 hp). A new, smaller lithium-ion battery pack similar to the one used in the 2012 Honda Civic replaced the previous nickel-metal-hydride pack, cutting both its size and weight. A new "boost" button was added that allows the driver to call on the electric motor for extra torque, assuming the battery is more than 50 percent charged.

The CR-Z is a rarity among hybrids, as it offers a manual transmission in addition to the usual continuously variable transmission (CVT). The manual makes the car more fun, with the electric boost acting like a turbo when it kicks in. The CVT does provide better fuel economy, which is the trade-off for driver involvement. Even with the manual, the CR-Z doesn't have the handling or performance that its looks suggest. Because of the hybrid equipment, it's heavier than it would be with just a small engine. The result is sluggish acceleration and more body roll than other small coupes.

Honda offers three driving modes—Sport, Normal, and Economy—to let drivers chose to optimize fuel efficiency or maximize performance. Each has its own calibration for the engine and transmission mapping, and each mode adjusts the stiffness and speed of the power steering and throttle. The CR-Z's character changes for the better in Sport mode, and it feels more nimble and responsive behind the wheel.

Like most small two-seaters, the packaging of the CR-Z is tight. Its two seats are roomy and supportive, though the driving position is a bit low—taller drivers often end up with significant back aches, with no satisfactory angle of adjustment. Where a back seat might be, there is instead a pair of storage wells. Total cargo space is a decent 25 cubic feet, but the load deck is high so that the cargo area just isn't truly useful.

The standard features in the CR-Z include automatic climate control, keyless entry, power accessories, and a six-speaker sound system with USB connectivity. Bluetooth connectivity is reserved for the EX models. A 360-watt premium sound system, bundled with a navigation system, is also on offer.

Beginning with the 2015 model year, Honda is supplying a kit that should go a long way toward transforming the car's character. For CR-Zs equipped with the manual transmission, the Honda Performance Development (HPD) kit includes a supercharger for the engine, an HPD clutch, a limited-slip differential, new front brakes, a sport suspension, 18-inch wheels, a sport exhaust, and several aero and dress-up parts. As a result, engine output climbs to 187 hp and 171 lb-ft of torque. For CVT-equipped models the engine is left alone, but the other dynamic and aesthetic improvements apply. It's likely that fuel economy will suffer a bit, swinging the CR-Z's balance farther toward sport, but since it's a dealer-installed kit, the setup doesn't get tested by the EPA.

Honda discontinued the Insight for 2015; the five-door hatchback was closely related to the CR-Z and shared powertrain components—its extinction probably foretold the fate of the CR-Z.

Rate and Review your car for The Car Connection! Tell us your own ratings for a vehicle you own. Rate your car on Performance, Safety, Features and more.
Write a Review
For 2012 Honda CR-Z

I simply love my CRZ

Its perfect for day to day use. style with economy.
people found this helpful.
Was this review helpful to you? Yes
2011 Honda CR-Z 2011 Honda CR-Z

Performance is good and design is nice. Grat value!
people found this helpful.
Was this review helpful to you? Yes
2011 Honda CR-Z 3-Door Manual EX w/Navi

A well rounded vehicle. The handling is sharp and crisp.
people found this helpful.
Was this review helpful to you? Yes