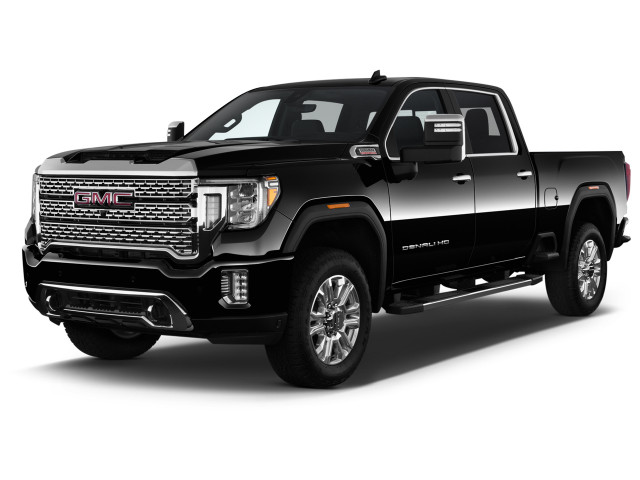 The GMC Sierra 2500HD is a heavy-duty pickup that's related to the Chevrolet Silverado 2500HD. Like the Chevy, the GMC version is offered in three-quarter ton and one-ton configurations, with a high-buck Sierra Denali edition available for either.

Where the Chevy Silverado heavy-duty range may skew toward work and fleet buyers, the GMC Sierra range is more often the luxurious choice. The GMC Sierra Denali HD offers a heady mix of capability and luxury features that many buyers are willing pay for.

The Sierra HD is new for the 2020 model year, one year after the light-duty 1500 pickups were redesigned.

With the Sierra HD, GMC has rivals for the Ford Super Duty range and the Ram heavy-duty lineup.

The 2020 GMC Sierra HD is bigger, more opulent, and more capable than ever. A series of cameras and other technology tools help it tow with more confidence, while new driver-assistance features make it safer.

The new Sierra HD comes with rear-wheel drive as standard or optional four-wheel drive. Regular, double and crew cabs are offered with standard and long beds. The beds are also wider and longer at 8-foot-2 inches and 6-foot-11 this time around to give them best-in-class capacity.

The Sierra 2500 HD rides on a wheelbase that is 4.5 inches longer, and it's 1.4 inches wider, 2 inches taller, and up to 11.5 inches longer. The bigger dimensions make it more commanding than ever. Despite the tall, blocky grille, the Sierra manages to look more coherent than its Chevrolet Silverado 2500HD sibling. Notable exterior features include LED headlights, side steps in front of the rear wheels, bed steps built into the rear bumper, an available carbon-fiber bed, and GM's MutliPro tailgate that can serve as a workbench, bed step, or seating spot and offers built-in speakers for tailgating.

Active safety features are creeping into HD trucks and the Sierra HD gets some of them. Blind-spot monitors, rear cross-traffic alerts, forward-collision warnings with automatic emergency braking, and lane-departure warnings join other safety equipment like front and rear park assist and GM’s rear camera mirror.

Buyers can opt for a variety of models, starting the the work-truck-like base, and moving through SLE, SLT, AT4, and Denali. The AT4 is the well-equipped off-roader. It comes with black trim, an off-road suspension, skid plates, and knobby tires, while the Denali has a chrome look and more amenities. Leather upholstery is standard on AT4 and Denali, as is an 8.0-inch touchscreen for infotainment and navigation.

Like other luxury trucks (and cars), the Sierra Denali HD starts well north of $70,000, but its popularity and growing list of interior refinements may be an indicator of how far truck buyers have come—and how far they're willing to go in the future.

The GMC Sierra HD history is understandably linked to the Chevrolet Silverado HD range from which it's based.

GMC's heavy duty range goes back to the 1960s, when the truckmaker offered three-quarter and one-ton versions of their pickups, badged 1500 and 2500 with "K" denoting newly available four-wheel drive. Most of those heavy-duty trucks were powered by inline-6 engines, although a V-8 was made available toward the end of that generation.

The late-1960s and early-1970s marked a new generation for the big pickups, which were still reserved for commercial- or work-focused users. The "Sierra" name denoted a trim level on heavy-duty trucks, which applied to top trims for GMC. The truckmaker also shifted its naming convention to 2500 and 3500 for three-quarter and one-ton trucks, which endures today.

Those trucks were followed by a long-running series of pickups called the "square body" generation, powered predominately by V-8 gasoline engines, although a V-8 diesel engine was newly available. GMC updated its designs, inside and out, until the pickups were eventually retired in the late-1980s.

GMC Sierra's popularity soared in the 1990s with its GMT400-based pickups that, among other things, added an independent front suspension for a smoother ride. Although double cabs were available before the fourth-generation pickup, the Sierra's four-door version took off with consumers looking for a comfortable ride for a crew.

The K-named trucks were retired after that generation when GMC made the switch to the Sierra name for the entire range in 1998.

GMC found paydirt in 2002 when it changed the name of its top-trimmed Sierra C3 to "Sierra Denali." The next generation of GMC Sierra heavy-duty pickups traded on that success with increasing number of comfort features including the discontinuation of manual-equipped heavy-duty pickups.

The last-generation GMC Sierra HD arrived in 2014. While powertrains, frames, and suspension heavy-lifting had slowly made its way into the Sierra 2500HD before then, the truck was transformed when it adopted the interior from the light-duty range.

Both engines were paired to a 6-speed automatic transmission. GMC offered 8-foot or 6-foot-6 beds.

The GMC Sierra 2500 Denali HD proved to be a best-seller for the truckmaker thanks to its high level of features and quality interiors.

Rate and Review your car for The Car Connection! Tell us your own ratings for a vehicle you own. Rate your car on Performance, Safety, Features and more.
Write a Review
2015 GMC Sierra 2500HD 2WD Crew Cab 153.7"

This is a great truck..

Great Truck, very dependable and great mileage. I would recommend this rig to anyone who needs a new vehicle..
people found this helpful.
Was this review helpful to you? Yes