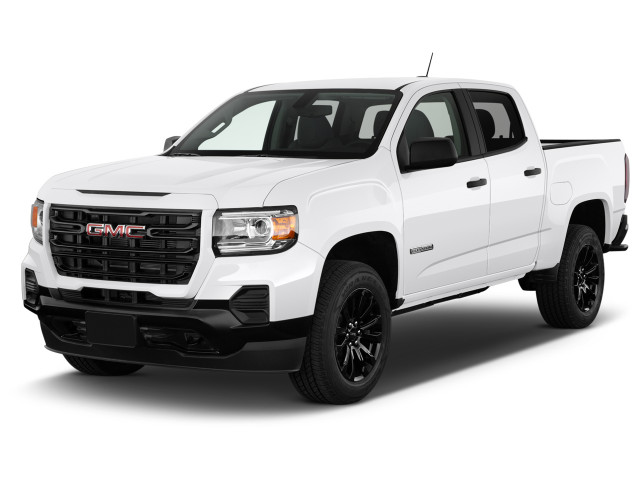 The GMC Canyon is a mid-size pickup that shares much of its running gear with the Chevy Colorado.

With the Canyon, GMC has a rival for vehicles such as the Toyota Tacoma, Nissan Frontier, and Ford Ranger.

The latest Canyon offers 4-cylinder or V-6 power, extended- or crew-cab styles, and a wide range of trims and build combinations. It's sold as a smaller alternative to full-size trucks, which some buyers might see as too big and bulky.

While the Colorado has taken a somewhat macho approach, the Canyon offers a small margin of luxury, evidenced by its more sophisticated and full-time four-wheel-drive system.

Overall, the GMC Canyon is more manageable and more fuel-efficient than a full-sizer, without all of the feature and cabin sacrifices that choosing a compact or mid-size truck used to involve. It is a descendant of the GMC S-15 and Sonoma pickups.

Both rear- and four-wheel drive variants are available, in either extended- or crew-cab styles, with a choice of a 6-foot-2 bed, or, for crew-cab models, a shorter 5-foot-2 bed. Three trim lines are offered: base, SLE, and SLT. An All-Terrain package is offered on SLE models, adding 17-inch painted aluminum wheels, all-terrain tires, and a body-color grille surround, as well as off-road-tuned suspension. If you want your small GM truck without a bed, however, you'll have to look to the Chevy Colorado's chassis-cab option.

Interior features and driver convenience items are definitely improved versus the last versions of the Canyon. There's now top-notch audio and smartphone connectivity, available navigation, and in top models, a 7.0-inch touchscreen infotainment system. OnStar 4G LTE data connectivity might help those who work out of their trucks, and optional safety extras include forward-collision alert and lane-departure warning—both of which GMC claims as segment firsts. Extended Cab and Crew Cab versions both accommodate back-seat passengers, although the Extended Cab's rear quarters are better suited for gear storage than carrying people.

With newly engineered, body-on-frame underpinnings, payloads are impressive; V-6 models can tow up to 7,000 pounds, while 4-cylinder models can pull 3,500 pounds. The base engine in the Canyon lineup is a 2.5-liter inline-4, available with a 6-speed automatic; the inline-4 returns fuel-economy ratings of up to 20 mpg city, 27 highway, 22 combined. Buyers can step up to a 3.6-liter V-6 engine, making 305 hp and 289 lb-ft of torque mated initially to a 6-speed automatic until 2017, when a new V-6 with cylinder displacement and an 8-speed automatic arrived. Most models offer a choice between rear- or four-wheel drive.

For the 2016 model year, a 2.8-liter Duramax turbodiesel inline-4 became available in the Colorado, offering improved towing and hauling, all with fuel economy numbers better than those of the base 4-cylinder gas engine. The turbodiesel makes 181 hp and 369 lb-ft of torque.

GMC has offered several special-edition versions of the new Canyon, the first of which was the Nightfall Edition. The Nightfall package was available on SLE trims and covers the truck in Onyx Black paint, adding a special blacked-out grille, black side steps, 18-inch wheels with dark-painted pockets, a chrome exhaust tip, and some other normally optional features.

The 2017 models added a new V-6 and 8-speed automatic gearbox, which actually earn slightly lower fuel economy thanks in part to some changes by the EPA to its fuel economy testing procedures. Changes for 2018 were limited to wider availability of leather upholstery, while the 2019 Canyon gained a new infotainment system and a handful of upgraded features.

For 2020, the Canyon lineup gained new infotainment software. In 2021, GMC introduced the AT4 off-road trim on the Canyon and an Off-Road Performance Edition with a self-leveling suspension, more skid plates, big off-road tires, an Eaton G80 locking rear differential, and hill descent control. Nothing changed for 2022 except the addition of a Denali Black Edition with 20-inch gloss black wheels, black side steps, black exhaust tips, and all-weather floor liners.

As the replacement for the GMC Sonoma, the GMC Canyon launched in 2004 and sold well during its first few years on the market, outpacing many rivals, including the Ranger and Frontier. The Tacoma proved more serious competition, outselling the Canyon and its Chevy Colorado twin, and making for an interesting fight in the segment. Priced from the mid-teens, the Canyon offered a lot of capability for a low price, but scored poorly in crash tests.

With its multitude of configurations, there was a Canyon to suit almost any truck buyer's need or want. The truck had solid mechanicals and an especially rugged four-wheel-drive system, but many found the interior to be cheaply finished with low-rent materials and a lacking design. Because of that, it was best used as a work truck, not by those who were looking for luxury or image.

Regular cab, extended cab, and crew cab models were all available for the Canyon, and it could be had in a range of trims, including Work Truck, SLE, and SLT, differentiated primarily on the basis of equipment and features. Crew cab models got a shortened 5-foot-1 bed in place of the standard 6-foot bed. Powertrains included a 2.9-liter 4-cylinder rated at 185 hp and 190 lb-ft of torque, a 3.7-liter 5-cylinder good for 242 hp and 242 lb-ft of torque, and a 5.3-liter V-8 rated for 300 hp and 320 lb-ft of torque.

The four-cylinder could be had with either a 5-speed manual or a 4-speed automatic, while the 5-cylinder and V-8 were limited to the 4-speed automatic. The V-8 was only available on crew and extended cab models. Despite the smallish engines and mid-size positioning, the Canyon had fair towing and payload capacities, good for at least 1,200 pounds payload depending on the cab selected. Towing capacities are determined by the engine selected, with the automatic 4-cylinder rated for up to 3,400 pounds gross trailer weight, while the manual maxed out at 2,400 pounds. The five-cylinder could tow up to 5,500 pounds, while the V-8 was rated at 6,000 pounds across the board.

A sportier version of the truck could be configured with the addition of the ZQ8 sport suspension, available on two-wheel-drive extended and crew cab models with either the V-8 or 4-cylinder engines.

For its final year, 2012, the former GMC Canyon added standard Bluetooth connectivity, among other minor changes and trim adjustments.

GM now builds the Canyon in Missouri; previous versions were built in Louisiana.

Rate and Review your car for The Car Connection! Tell us your own ratings for a vehicle you own. Rate your car on Performance, Safety, Features and more.
Write a Review
2018 GMC Canyon 4WD Ext Cab 128.3" SLE

Already had someone look at mine and went and bought one himself
people found this helpful.
Was this review helpful to you? Yes
2017 GMC Canyon 2WD Ext Cab 128.3"