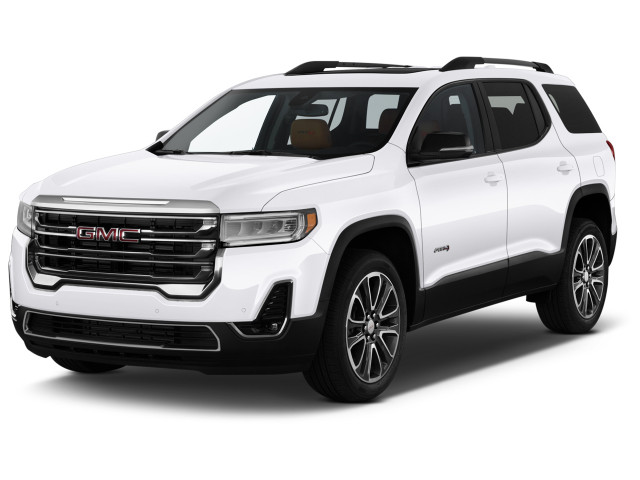 The GMC Acadia mid-size crossover SUV is a family vehicle that is related to the Cadillac XT5. The new version is relatively smaller than the crossover that first debuted in 2007.

With the Acadia, GMC has a popular, family-sized crossover that is better distinguished from the Buick Enclave and Chevy Traverse with which it used to share common running gear. While it is closer in size to the GMC Terrain, it is still roughly seven inches longer than that vehicle and is distinguished by the available third-row seat.

The 2017 GMC Acadia's styling is familiar, yet new. It looks a bit like a scaled down version of the last model, though with some softer lines, upscale elements, and unique styling flourishes. The blocky look of other GMCs is downplayed here, with a sleeker windshield angle, rounder corners, and side window shapes that kick up at the rear. Metal trim around those windows, as well as the grille, adds an upscale look. Like most new vehicles these days, the Acadia also sports LED signature lighting.

Like the outgoing model, the new Acadia comes with front- or all-wheel drive. Both versions get a new drive mode selector with various modes for different driving conditions. A new All Terrain model has off-road potential.

The new base engine is a 2.5-liter 4-cylinder that produces 193 horsepower and 190 pound-feet of torque. Buyers can also opt for an upgraded 3.6-liter V-6 that makes 310 hp and 271 lb-ft of torque. Both engines were initially mated to a 6-speed automatic transmission, and the 4-cylinder engine has start/stop technology. With front-wheel drive, GMC says the 2.5-liter engine delivers 22 mpg city, 28 highway, while the 3.6-liter will get 25 mpg on the highway. GMC quotes a 4,000-pound towing capacity for the V-6.

Inside, five-, six-, or seven-passenger seating configurations are offered. The All Terrain can seat only five. The available split-folding second-row seat has an upgraded version of its Smart Slide feature that allows passengers to move the seat from outside the vehicle. With the second- and third-row seats folded down, the Acadia has 79 cubic feet of cargo space, which is almost 40 cubic feet shy of the outgoing model.

For 2019, the Acadia gained a new Black Edition appearance package. In 2020, GMC added a 230-hp turbo-4 to the lineup and switched the transmission on all models to a new 9-speed automatic.

GMC introduced the Acadia for the 2007 model year. It was based on the Lambda platform that it shared with several other GM crossovers. The Acadia is notable as being the first front-drive model from GMC, as well as the brand's first unibody vehicle.

Throughout its run, the first-generation Acadia's powertrain consisted of a 288-hp, direct-injected 3.6-liter V-6 matched to a 6-speed automatic transmission. Most of its rivals couldn't match the Acadia's 5,200-pound towing capacity, though the same couldn't be said for fuel economy. In its most efficient front-drive form, the Acadia was rated at 17 mpg city, 24 highway.

The Acadia could be ordered with all-wheel drive, but since there was no four-wheel-drive low range, it really didn't provide a lot of off-road capability. Like most crossovers, it was intended to help drivers get through sloppy weather on the road, not off.

Inside, the 2007-2016 Acadia had a practical layout that placed it somewhere between a minivan and a GMC Yukon. It could fit either seven or eight passengers in three rows of seats. The third row was actually useful, and even when it was in use the Acadia offered 20 cubic feet of storage space behind. With all of the seats folded, the space expanded to 116 cubic feet.

The 2012 Acadia received two new colors and an accessory power outlet on the console, plus new blind-spot mirrors. The Denali version also added hill-hold technology and brake override of the accelerator pedal.

For the 2013 model year, the Acadia at last got a more extensive refresh, including a completely new three-slot grille and front-end design, new LED running lamps, new taillights, and a new rear spoiler, plus an upgraded interior with more soft-touch surfaces plus French stitching and ambient lighting. Denali models became even more luxurious, with a new power steering-column adjustment and power front passenger seat. Powertrains carried over, though GM tuned the transmission controls for smoothness.

The Acadia was carried over into the 2015 model year only lightly updated and the only revision of note for 2016 was the addition of 4G LTE connectivity that turned the crossover into a mobile wi-fi hotspot.

Rate and Review your car for The Car Connection! Tell us your own ratings for a vehicle you own. Rate your car on Performance, Safety, Features and more.
Write a Review
For 2017 GMC Acadia

THIS CAR SCARES ME.

Nice car but the most terrible gas milege