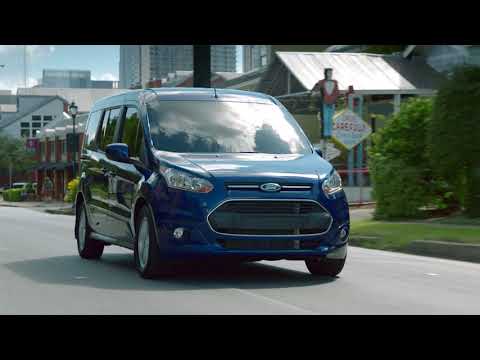 Available as a empty van or as a minivan-alternative passenger wagon, the Transit Connect was updated for the 2019 model year. Ford will offer the small van with a gas or diesel engine, in short- or long-wheelbase configuration.

With the Transit Connect, Ford has a compact van to compete with the Nissan NV200, Ram ProMaster City, and Mercedes-Benz Metris. All of the vans are aimed at small-business owners with short commutes, but nearly all can be configured as a bare-bones minivan alternative. If the Transit Connect can't haul it, Ford sells a larger Transit that's available in multiple configurations.

The new 2019 Ford Transit Connect was unveiled in February 2018 and featured a revised powertrain lineup aimed at fuel efficiency. A 2.0-liter inline-4 or a 1.5-liter turbodiesel will send power through an 8-speed automatic transmission and front-wheel drive.

The turbodiesel should return at least 30 mpg on the highway, and the gas engine is equipped with start/stop to cut consumption in stop-and-go traffic.

Like its predecessors, the new Transit Connect is available in myriad configurations and specifications to suit small-business owners.

The 2010-2013 Transit Connect was based on a vehicle more than 10 years old by the time it was retired. That version of the Transit Connect was made in Turkey and had been sold across Europe since 2003. For a time, it had some competition in the Honda Element and the Chevrolet HHR panel wagon—both of which were canceled for the 2012 model year.

The previous Transit Connect was sold in the U.S. with a single powertrain. It was powered by a 136-horsepower, 2.0-liter inline-4 teamed with a 4-speed automatic transmission. Acceleration was leisurely with the combination, but fuel economy was an estimated 21 mpg city, 27 highway. The front-drive van wasn't a sloppy handler, though—its steering was reasonably quick and the ride quality occupied a good middle ground of firmness.

Those pre-2014 Transit Connect models lacked all but the basic accoutrements, and had fusty, hard-plastic interiors that felt more 1994 than modern. Still, with their vertical expanses and the side-hinged doors at the back, those Transit Connects were useful, flexible options for small businesses and private use.

Ford briefly offered an all-electric Transit Connect with a driving range of 70 to 100 miles and a recharging time of 6 to 8 hours, but bankruptcy of the conversion company in 2012 sealed this model's place as a small blip in electric-vehicle history.

The second-generation Transit Connect arrived for 2014 riding on a new platform and including far better creature comforts than the model it replaced. Ford focused more on the civilian uses of this delivery van turned people hauler, going after a segment of the market that has mostly been abandoned by cars like the old Honda Element. It's better suited for family hauling than before and also manages to be better dynamically, with increased refinement and improved fuel economy.

This passenger version offers three rows of seating, with a sliding third row and folding second and third rows—plus a choice of a liftgate or dual hinged cargo doors in the rear. Like the delivery-van version, it sits on a new front-wheel-drive platform and is powered by new engines—either a 2.5-liter 4-cylinder or a 1.6-liter turbo-4—driving the front wheels through a 6-speed automatic transmission.

Those versions borrow much of the front end and the front-row cabin appointments from the Ford Escape, so they're very pleasant to be in, with soft-touch materials and a sophisticated, stylish dash layout. Transit Connect driving dynamics are astonishingly good. While the turbocharged engine provides better performance when you need to dart through a gap in traffic, it's a tossup as to which engine is better; 2.5-liter models offer 2,000 pounds of towing capacity when properly equipped and return very good gas mileage when lightly loaded.

Because of an old import tax, all Transit Connects brought here for U.S. sale arrive as five-door wagons, even the two-seat commercial versions. This a workaround of the so-called Chicken Tax, which is imposed on commercial vehicles imported into the U.S. Ford brings them in with temporary seats and side glass, ripping them out at port on the East Coast, and recycling what it can, thus avoiding the hefty 25-percent tax. This is the same reason pickups sold in America are all built here, thereby avoiding the extra tariff. Ford also offers a larger Transit van line in the U.S. now, in both commercial and passenger-carrying grades, although those models are built in the U.S. and avoid the tariffs.

Rate and Review your car for The Car Connection! Tell us your own ratings for a vehicle you own. Rate your car on Performance, Safety, Features and more.
Write a Review
2016 Ford Transit Connect Wagon 4-Door Wagon SWB XLT w/Rear Liftgate

Just drove one just may fit right in if we can fit in budget.