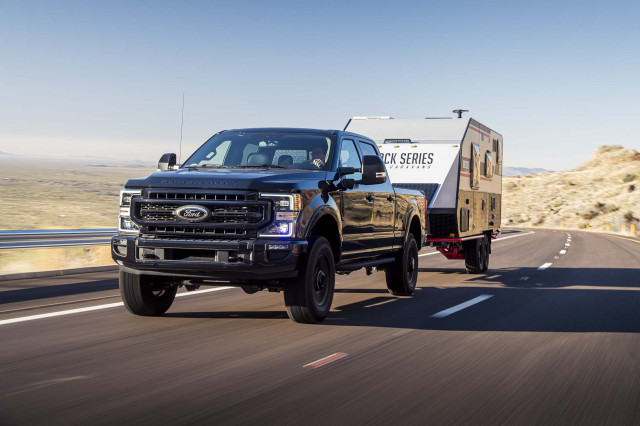 The Ford F-250 Super Duty is the automaker's heavy-duty pickup truck range. Available in F-250 (3/4-ton) or F-350 (1-ton) configuration, the Super Duty is appealing for its capability as well as its comfort.

With the Super Duty, Ford takes on rivals like the Chevy Silverado and GMC Sierra 2500-series trucks, the Ram 2500, and even the Nissan Titan XD, which passes some light-duty trucks in towing and hauling, but falls short of the heavy-duty class on those fronts.

Ford unveiled the newest Super Duty pickups in the 2017 model year. A refresh is expected for the 2020 model year.

For 2017, the automaker extensively overhauled the Super Duty range. The heavy-duty pickups use significantly more aluminum than in prior years—similar to the F-150's changeover—and shed 350 pounds in body panels. The overall weight savings over prior years are a wash, according to Ford; the truckmaker uses that weight savings to beef up other parts of the truck.

Ford says the current F-250 has a boxed ladder frame that's 24 percent stiffer than the truck it replaced. Tow ratings rise to 18,000 pounds, when it's coupled to a conventional trailer.

Two powertrains are available in the F-250. The base truck is equipped with a familiar 6.2-liter V-8 rated at 385 horsepower and 430 pound-feet of torque. An optional, new 6.7-liter turbodiesel V-8 is available in the F-250 that boasts 440 hp and 925 lb-ft of torque. The latter should be popular for anyone with a grudge against a tree stump as it's required to achieve the heady towing and hauling figures.

Both engines are mated to a 6-speed automatic transmission and are available in either rear- or four-wheel drive configurations.

The updated Super Duty went on sale in late 2016 and was unchanged for the 2018 model year, save for minor horsepower and towing rating updates. The Super Duty's turbodiesel now makes 450 hp. For 2019, Ford added premium audio and a few minor features to the F-250.

For Ford, the "Super Duty" name goes back to the 1960s, but the direct ancestors of the current heavy duty pickup line only go back as far as 1999. That was the first year Ford split the F-250 and F-350 from the F-150 line. The first Super Duty pickups borrowed heavily from the 1997 Ford Powerforce Concept truck that first used a plunging window line near the sideview mirrors for better visibility and towing. The window line would eventually be a signature styling element for the heavy duty trucks.

The first Super Duty trucks were powered by massive engines including a 7.3-liter turbodiesel V-8 or a 6.8-liter gasoline V-10. Those engines were paired to a variety of transmissions including 4- and 5-speed automatics, or 5- and 6-speed manuals. Those initial Super Duty trucks skewed heavily toward work trucks; most of the trims didn't come close to today's lavishly equipped heavy duty offerings.

The second generation of Super Duty trucks was launched in 2008 with downsized engines and more opulent trims. The Triton V-10 could still be found under the hood, but the 7.3-liter turbodiesel was replaced with a 6.4-liter V-8. A 5.4-liter gas V-8 was standard. All engines were mated to either a 5-speed automatic, or 5- or 6-speed manuals.

For the first time, Ford offered the Super Duty in King Ranch and Harley Davidson trims, catering to buyers looking for the same luxury found in the F-150 in their Super Duty trucks. The success of heavy-duty trucks from all of the domestic automakers was hard to ignore and Ford significantly overhauled the Super Duty Series again in 2011 to keep up with General Motors and Chrysler.

The heavily upgraded 2011 Super Duty sported a massive grille increased power figures to match. A 6.2-liter V-8 came standard, which could be upgraded to the V-10. An upgraded 6.7-liter turbodiesel was available beginning in 2011, and jumpstarted the heavy-duty pickup arms race. Initially the unit was rated at 735 lb-ft of torque before being upgraded to 800 lb-ft and then again to 860 lb-ft. In America, Ford stopped offering Super Duty trucks with manual transmissions for this generation.

Rate and Review your car for The Car Connection! Tell us your own ratings for a vehicle you own. Rate your car on Performance, Safety, Features and more.
Write a Review
For 2018 Ford Super Duty F-250

one tuff truck. and a joy to drive.

the only problem i have with this truck is that its to tall, i cant reach into the pickup box to grab a tool. bring it back down to the hight of the 2015 pickup. otherwise its a great truck.
people found this helpful.
Was this review helpful to you? Yes
For 2014 Ford Super Duty F-250

I wanted a truck, I got a truck, its a nice truck that acts just like its suppose to act.