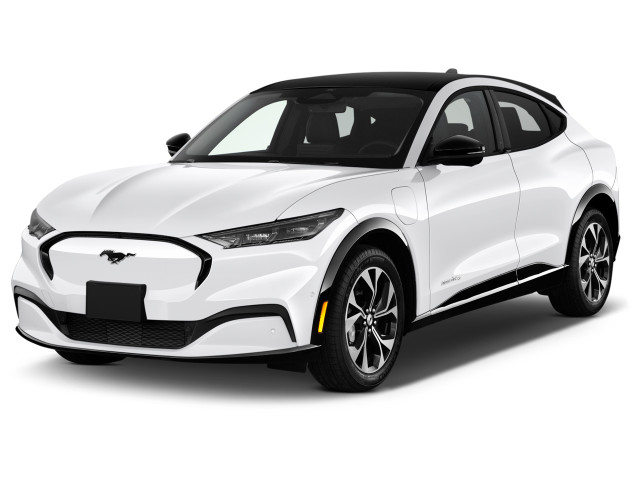 The Ford Mustang Mach-E accomplishes a slew of firsts for the Blue Oval: it’s the company’s first mass-market electric vehicle; the first to wear the Mustang name and badge outside of the coupe, convertible, and hatchback; and the first to compete head-to-head against Tesla.

With the Mustang Mach-E, Ford begins a new chapter of electrified performance with a 305-mile range in the California Route 1 Extended Range model with rear-wheel drive, or a targeted 0-60 mph time of 3.5 seconds in the GT model.

It competes against the Tesla Model Y, Chevy Bolt EUV, Volkswagen ID.4, and other electric crossovers.

Teased as a “Mustang-inspired” crossover, the Mustang Mach-E shocked (pun intended) fans when it debuted in 2019 wearing the Mustang name and badge.

The four-door electric crossover leans into its namesake with obvious styling cues beyond the badge—the fenders, front grille, profile, headlights, and taillights all draw a direct line back to the Mustang. The Mach-E’s proportions are bulkier than the Mustang—that’s easy to see—but a fast roofline helps shed visual weight, even to the detriment of interior space.

Inside, a tablet-style 15.5-inch touchscreen and 10.2-inch digital instrument cluster speak to the now. The Mach-E is easily the most technologically advanced Mustang so far, and it’s not shy about it. The minimalist looks spread to the low cowl and dash shapes—it’s flat, wide, and better for outward vision.

The Mustang Mach-E offers four outputs from its electric motors. Rear- or all-wheel drive are available, in standard- or extended-range models. Outputs range from 266 hp to up to 480 hp. The Mach-E’s range varies, depending on powertrain configuration, between 211 miles and 305 miles. With the battery pack mounted under the floor between the axles, the Mach-E maintains a low center of gravity for a sportier ride aided by an independent front and rear suspension.

The Mach-E seats up to five passengers and carries nearly 30 cubic feet of cargo with the seats up, but the frunk adds another 4.8 cubic feet. Options like a glass panoramic roof or safety upgrades are available, and performance packages are likely.

For the 2022 model year, the California Route 1 model is offered with the two-motor all-wheel-drive system, and it becomes the longest range AWD model at 300 miles. The GT Performance Edition now comes with a standard black roof, and Premium models get an available Ice White package with white paint and a light interior.

Be the first one to write a review on 2022 Ford Mustang Mach-E
Rate and Review your car for The Car Connection! Tell us your own ratings for a vehicle you own. Rate your car on Performance, Safety, Features and more.
Write a Review