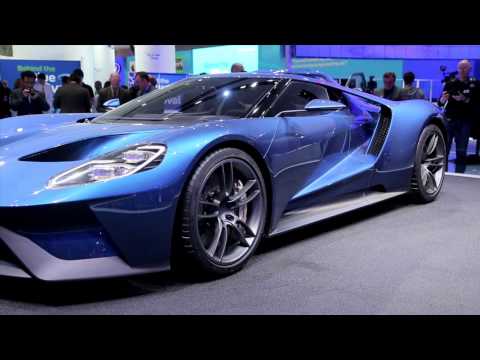 The Ford GT is a two-seat supercar with racing bona fides and an impossibly high price tag.

Now in its second generation, the GT is much more modern than the first generation car of 2005-2007. It uses a mid-engine design with a carbon fiber tub and carbon fiber body panels.

Revived for the 2017 model year, the Ford GT is powered by the brand's EcoBoost twin-turbocharged 3.5-liter V-6, which makes 647 horsepower and 550 pound-feet of torque. It sends its thrust to the rear wheels through a 7-speed dual-clutch rear transaxle.

Its limited availability is reflected in its price: it starts at $450,000.

The GT's suspension is inspired by race cars, and that's appropriate because it's built by race car builder Multimatic and it also competes in endurance racing. The suspension has a short-arm, long-arm design, and the springs and dampers are mounted inboard and longitudinally.

Those dampers are adjustable. In fact, Ford offers five different driving modes for the GT: Normal, Sport, Track, Wet, and V-Max. The V-Max mode is meant for reaching the car's top speed of 217 mph.

Aerodynamics play a big role in the GT's exterior design. Air flows through portions of the body to increase stability, and the car has active aerodynamics, including active grille shutters up front and a rear spoiler that raises and tilts. The car's adjustable ride height also affects how it cuts through the air.

Inside, the GT has two carbon fiber-framed Sparco seats, a Formula One-style steering wheel with lots of controls, and a digital display that changes depending on the drive mode. Active noise cancellation is standard, and so is Ford's Sync 3 infotainment system with navigation.

Safety equipment is limited to a rearview camera and the usual government-mandated safety items.

Ford is limiting the GT to 250 cars per year for a run up to four years. To commemorate Ford's win at Le Mans in 1966, Ford is offering a '66 Heritage Edition in Shadow Black with Silver Stripes and Frozen White #2 hood and door graphics. Also available is the even more track-oriented Competition Series model that does away with niceties like a radio and air conditioning to save weight, has a lightweight Perspex acrylic engine cover, comes with carbon fiber wheels and a titanium exhaust system, and gets additional carbon fiber exterior bits.

Though it only was built for a short time, the first-generation Ford GT has already assumed its place in the company's history. In part, that's because it was built specifically to be history.

With the GT, Ford had its long-wanted, road-going version of the GT40 racer that challenged Ferrari for Le Mans supremacy in the 1960s. It took decades, but the idea of building a streetgoing GT finally took hold at Ford as it prepared for its centennial, in June 2003. In January 2002, the company showed a concept GT at the Detroit auto show, after barely keeping the project under wraps—under the code name "Petunia."

The GT finally arrived late in 2003 as a production model for the 2005 model year. And though it would only be available for two model years it became an instant collectible. Inspired by the GT40, the GT was no direct copy: it wasn't 40 inches tall, for starters—it stood 44.3 inches high.

But in all other aspects, it was as stunning a recreation as it could be, given its modern powertrain and interior. The GT's mid-mounted V-8 was Ford's off-the-rack 5.4-liter of the day—only supercharged and massaged for a total output of 550 horsepower, and channeled to its rear wheels via a manual transmission. With 0-60 mph times of about 3.8 seconds and a top speed of about 190 mph, the GT's performance envelope was delivered with a unique signature.

In design, the GT bore a striking resemblance to the original, with some subtle cues to commemorate the company's anniversary, like high-intensity headlights styled to incorporate “100.” Working from the original, and improving its aerodynamics and its body construction with superheated aluminum sheets gave the GT a stiff body structure on which to mount a double-wishbone suspension front and rear.

Rounded out with a Torsen-style limited slip differential, four-piston Brembo brakes, and Goodyear Eagle F1 Supercar tires (235-series 18-inchers in front, 315/40ZR-19s in back), we thrilled in the performance it crackled with: "the new GT on paper bristles with the energy of a downed power line," we wrote.

The GT always was intended to be a limited-run vehicle, and production ended with a handful of 2007 models being built. Initially priced just below $140,000, the GT was by then available at a discount, but values have appreciated. With a GT40 winning its class at the 2013 Pebble Beach Concours, there's every reason to believe one of these will cross the center stage at The Lodge in the future.

Rate and Review your car for The Car Connection! Tell us your own ratings for a vehicle you own. Rate your car on Performance, Safety, Features and more.
Write a Review
2005 Ford GT 2-Door Coupe

This is a car of a lifetime for me.

It goes as fast or faster than anything in it's price range and looks great while doing it.

And it is increasing in value.

I have been a FORD guy all my life and when I saw the Ford GT racing at Le Mans in 1964 on a black and white TV while I was a PFC in the Marine Corps, I knew that I just had to have that car one day.

Fortunately, in 2007, I cashed some retirement savings and bought this one with less than 1,000 miles on it.

I will never sell it. + More »
people found this helpful.
Was this review helpful to you? Yes