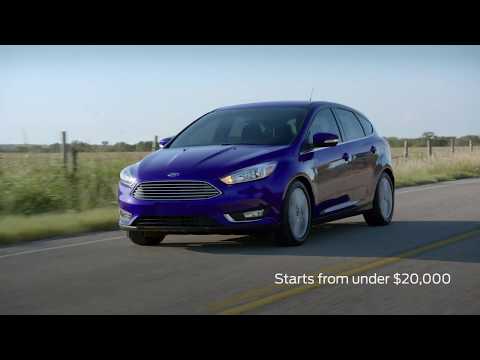 The Ford Focus is a compact sedan or hatchback that aimed for the middle of the market. Along with many other Ford cars, the Focus was shelved in 2018 for more crossovers, although a tall-riding Focus will remain part of the Blue Oval's lineup beyond 2018.

The Focus challenged the Honda Civic, Toyota Corolla, and Chevrolet Cruze, among many others.

With the Focus, Ford also offers a hot hatchback to cap the lineup. The Ford Focus RS arrived for 2017, the first time it has been available in the U.S. This harder-core version of the Focus ST adds all-wheel drive and an even more powerful turbo-4. The new RS also has more aggressive bodywork, a reworked suspension, and grippier tires.

The current third-generation Focus was launched as a four-door sedan and a five-door hatchback for the 2012 model year. The two-door and wagon models offered in previous generations and in Europe are not available here, while a sporty Focus ST "hot hatch" model joined the lineup for 2013.

The redesigned Focus is built in Michigan and shares about 80 percent of its design with the version sold in Europe. This version has excellent ride and handling as well as a more sophisticated driving feel overall. A new-generation direct-injection engine returns good gas mileage—up to 40 mpg in special SFE trim. The current Focus is great evidence that small cars don't have to seem like appliances, but can offer style, rewarding drivers, and upmarket features—if you're willing to pay for them.

On the efficiency front, Ford originally steered the Focus toward hybrid technology, the compact hybrid C-Max (built on Focus underpinnings) and the C-Max Energi plug-in hybrid model, offering 21 miles of battery range backed up by a gasoline engine. But for 2015, a new model joined the Focus lineup: one with a tiny turbocharged 1.0-liter 3-cylinder engine paired to a 6-speed manual. It's the kind of car that would have been unthinkable for a U.S. maker only a few years ago, but more efficient smaller engines and ever-rising corporate fuel economy rules have brought this most efficient of Focuses to the table.

At the other end of the scale, the Focus ST launched in 2013 features a 252-hp, turbocharged 2.0-liter inline-4 and much sportier suspension tuning, along with performance improvements throughout. We've driven the 2013 Ford Focus ST and found it to be a very satisfying enthusiasts' car, while remaining one that you can drive daily on your commute, as well as for long highway trips. It was good enough, in fact, that it was nominated for the Best Car To Buy award by Motor Authority.

Ford offers a Focus Electric hatchback in a handful of states. The company doesn't do much to promote it, which leads us to believe it is simply a so-called "compliance car," designed to meet California regulations that require companies to sell a certain number of zero-emission vehicles to be allowed to sell other vehicles in the state. Ford recently slashed the price of the Focus Electric by $6,000, which means the company may not be selling as many as it needs to.

While the current Focus is base-priced just under $17,000 with delivery, it's easy to spend upward of $10,000 more if you ladle on the luxury items that Ford offers—separately and as part of the top-end Platinum trim level. Ford dropped the SEL trim from the Focus lineup after a year, going from SE to Platinum. But the current Focus has all sorts of class-first options—including the MyFord Touch interface, active parking assistance, and HD Radio.

For 2013 and 2014, the Focus rated an overall five-star NHTSA safety score, while early models were slightly lower. It's one of the few compact sedans to have earned both that and IIHS Top Safety Pick status. It earned an "Acceptable" rating in the tough new IIHS small-overlap front crash test—just one notch down from the top "Good" that it earned on all other tests.

The Focus received a visual refresh for the 2015 model year, including a revised front end and upgraded interior. Engine offerings were expanded as well: A version using the 3-cylinder, 1.0-liter engine joined the lineup, after first becoming available in the smaller smaller Fiesta. The ST and Focus Electric benefited from the styling updates as well, although both left their powertrains unchanged for 2015.

For the 2016 model year, the all-wheel-drive rally-ready Focus RS joined the lineup. The most expensive Focus yet, it's also the fastest. With 350 hp on tap, the Focus RS can hit 60 mph in less than 4.6 seconds.

The Focus was carried over through the 2018 model year. A new version should go on sale by 2019; it will be Ford's first American-market vehicle sourced partially from China.

The original Ford Focus replaced the old Escort back in 2000 and has been the company's compact car line ever since. When it was first introduced that year, the Focus replaced not only the Ford Escort but also the slightly larger Ford Contour sedan, which was then discontinued. At that time, the Focus was a more upscale-feeling small car than most, offering a better interior experience than competitors, plus critically lauded handling, so the top rivals at the time were the Volkswagen Golf/Jetta and Mazda Protégé.

Over its life, the Focus has had a variety of body styles, including two- and four-door sedans, three- and five-door hatchbacks, and a wagon. As compacts have gotten larger over the years, the Focus lost its place as the entry-level model in Ford's lineup when the Fiesta subcompact arrived for 2011.

In its initial several years, the Focus was offered with 2.0-liter 4-cylinder engines that made 110 hp or 130 hp, with the 130-hp (DOHC) version being the pick of the two. Most models could be equipped with a 5-speed manual or 4-speed automatic, though for many years wagon models were oddly offered only with an automatic. Some models were offered with a 2.3-liter engine. In addition to all the body styles, the Focus was available in many different trim levels and could be loaded with luxury items like leather upholstery and a moonroof.

A 2005 model year refresh simplified the lineup in many ways and brought crisper front-end styling; the engine lineup changed to 136-hp (2.0-liter) and 151-hp (2.3-liter) versions of Ford's more modern Duratec engine. Focus models from this era and later are generally considered more reliable than the earlier ones—and for wagon and hatch aficionados, 2005 to 2007 is the sweet spot.

For 2008, the Focus lineup was refreshed more thoroughly, with an extensively redone interior, more refinement, and expanded safety features. The wagon was dropped along with all hatchback models, replaced by a rather homely looking two-door coupe sold alongside the sedan. Also of note, Ford chose the youth-oriented Focus in which to introduce its new Sync hands-free interface, which later spread to the rest of the lineup.

That Focus ST packed a high-output 4-cylinder that made 170 hp, a strengthened Getrag 6-speed manual transmission, uprated brakes, a tony exhaust, and a stiffened suspension. It was lots of fun to drive and is still admired by hot-hatch lovers.

Rate and Review your car for The Car Connection! Tell us your own ratings for a vehicle you own. Rate your car on Performance, Safety, Features and more.
Write a Review
2017 Ford Focus SEL Hatch

One little hot rod and loads of fun.