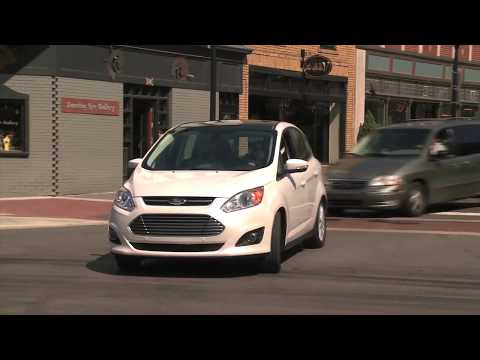 The Ford C-Max was a pair of fuel-efficient compact hatchbacks that comprises a C-Max Hybrid gasoline-electric model, and a plug-in hybrid C-Max Energi model. They were related to the Ford Focus compact hatchback and sedan, and the Ford Escape crossover utility vehicle, and were built in the same Michigan plant as the Focus.

New for the 2013 model year, the C-Max was intended to be a rival for the Toyota Prius, and its plug-in version competes with the likes of the Chevy Volt and plug-in versions of hybrid sedans from several makers. But after EPA investigations, the C-Max Hybrid's high gas-mileage ratings were reduced not once but twice, removing it from any real competition with the Toyota Prius, even before the advent of that car's new fourth-generation model in 2016.

With the C-Max, Ford minimally updated it over six years on sale. Cheap gas hasn't helped as more buyers flocked to crossovers.

The C-Max ended production in 2018 as Ford planned a new range of electric vehicles that will bow after 2020.

Both C-Max models sit high and share common Ford design touches, including a large front grille opening meant to tie the C-Max to the appearance of the Ford Focus Electric, the company's only all-electric vehicle. For a tall hatchback, the stylists gave it flowing lines, including highlighted wheel arches and a slight haunch over each rear wheel. The effect is nowhere near as racy as the Focus five-door hatchback, but this car served a different audience: buyers who want the highest gas mileage and a car that says it's a hybrid.

Inside, Ford's C-Max shared styling cues with the Focus hatchback and sedan. The modern styling, soft-touch surfaces, and chrome accents gave it a more upscale look than the Space Age hard-plastic interior of the Prius from the same generation. And the full-color gauge and information display behind the steering wheel could be configured to show the car's operating data in a variety of ways, depending on what the driver wanted to see.

The C-Max models shared a 2.0-liter inline-4 tuned specifically to work with Ford's hybrid system, which contained a pair of electric motor-generators that power the vehicle and recharge the battery in constantly changing ratios. Total power output between the engine and drive motor was 188 horsepower, or 54 hp more than the Prius' powertrain. In practice, that means that the C-Max engine didn't struggle quite as much and sounded less desperate under the heaviest loads, like short uphill freeway on-ramps.

The hybrid C-Max sold in greater volumes, but the plug-in hybrid Energi model received better fuel-economy ratings. The plug-in model was rated at 20 miles of electric range (down from 21 mpg) and 38 mpg combined (down from 43 mpg). In practical terms, this meant most drivers could get 15 or more miles of electric-only travel before the C-Max Energi exhausted its battery pack and reverted to being a regular hybrid (with slightly lower gas mileage due to its higher weight and lower gearing).

The C-Max received average ratings from both the NHTSA and the IIHS, with the former giving both models four stars overall. The IIHS only tested the C-Max Hybrid, and gave it top marks in all categories except the small frontal overlap test, where it scored an "Acceptable" rating. The models included front and side airbags for both front-seat occupants, side-curtain airbags for the first and second rows, and a driver's knee airbag. They have the usual array of electronic safety systems, including stability control, traction control, and anti-lock brakes. For 2017, a rear-view camera was standard on all models.

Sales of the C-Max were affected by complaints from early owners and journalists who were unable to achieve the lofty EPA fuel-economy numbers Ford originally claimed. As a result, the C-Max has had its ratings reduced two times, the first in August 2013 and then again in June 2014. Similar adjustments were made to other Ford and Lincoln hybrid claims. While the 2013 Ford C-Max Hybrid was originally rated at 47 mpg city, 47 highway, 47 combined, Ford lowered that rating to 43 mpg combined in 2013, following a pledge from the EPA that it would investigate the situation. Ford agreed to pay the buyers of 2013 C-Max models a set amount for the extra gasoline they presumably had to purchase.

Then in June 2014, Ford lowered the C-Max ratings a second time, to 42/37/40 mpg after discovering errors in lab-test measurements and calculations for aerodynamic drag. Ford reached an agreement with the EPA to lower the ratings and send an additional check for the increased gasoline costs to all owners of 2013 and 2014 C-Max Hybrids. Altogether, six separate Ford and Lincoln hybrid models had their efficiency ratings reduced at the same time. Ratings for 2018 were 42/38/40 mpg for the hybrid C-Max.

The new ratings are much closer to the real-world mileage of 36 to 39 mpg achieved by both reviewers and owners. That remained a credible number for a heavy and well-equipped five-door compact car, but the purpose-built Toyota Prius range still trounces it, delivering real-world gas mileage of more than 50 mpg combined (excluding the Prius V wagon, which is rated at 42 mpg).

Updates over the C-Max's lifespan were few, but Ford added its Sync 3 infotainment system to the hybrid hatchback in 2016 to replace the much-unloved MyFord Touch interface. The front styling got a few incremental, almost indiscernible, tweaks for 2017, and that same year a new Titanium high-end trim level replaced the former SEL. The base SE trim continues, and for 2018, two new paint colors were added.

Rate and Review your car for The Car Connection! Tell us your own ratings for a vehicle you own. Rate your car on Performance, Safety, Features and more.
Write a Review
For 2018 Ford C-Max

My 2013 Ford C-Max Energy by far is the most reliable and safest car I have ever owned.

C-Max-better than I ever thought