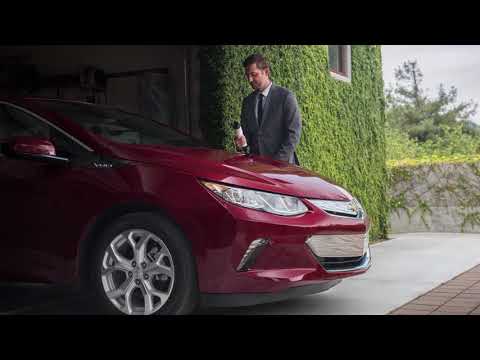 The Chevrolet Volt is a compact plug-in hybrid that's been a surprising success for GM. It operates as an electric car, first and foremost. Its range in the current generation is more than 50 miles on electricity alone, when electrons are depleted it operates as a hybrid with a range of more than 300 miles.

Chevrolet has wavered on clearly explaining those systems, but one thing is clear: the Volt was the first of its kind from General Motors. It helped ease some owners into electric-car ownership and set the table for the Bolt EV to come later.

With the Volt, Chevy has rivals for vehicles including the Toyota Prius Prime, Hyundai Ioniq, and Kia Niro.

A faster charger headlines changes to the Volt for 2019. The Volt will end production in 2019 as GM plans for more battery-electric vehicles.

The latest version of Chevy's extended-range electric vehicle retains all of the Volt's strongest attributes while fixing most of the shortcomings of the previous model. Not only does it have that 53-mile electric range, but also its EPA fuel-efficiency rating when the engine switches on is 42 mpg combined. It's slightly less expensive than the previous Volt, though its starting price before incentives is still more than $30,000.

The styling may be the biggest departure from the outgoing model, with smoothed-over, flowing lines taking the place of the somewhat slab-sided and crisp design of the original. The overall Volt silhouette stays relatively similar, ensuring continued aerodynamic slipperiness that's needed to achieve big fuel-economy numbers, although with the softer curves the drag-reducing rear slope is much better integrated and even attractive now.

The second-generation Volt uses an 18.4-kilowatt-hour lithium-ion battery pack that gives a stellar EPA rating of 53 miles of electric range, about one-third more than the 38-mile rating for 2013-2015 Volts. That range will let Volt owners cover nine of every 10 trips solely on grid power, Chevy says, up from about 80 percent previously.

Its range-extending engine is a 1.5-liter 4-cylinder model from GM's latest global family of 3- and 4-cylinder engines. It delivers 101 horsepower at 5,600 rpm, and runs on regular (87-octane) gasoline. After the Volt's battery pack has been depleted, the engine generates electricity by turning one of the two motor-generators to flow electricity to the battery pack. Total output from the two motors is 111 kilowatts (149 hp) and a remarkable 294 lb-ft of torque. An 8.9-gallon fuel tank and the larger battery give a rated range of 430 miles, substantially higher than the last Volt's 340 or so miles.

The blending of electric motors and gas engine has been optimized around GM research that says 80 percent of cars in the U.S. travel less than 40 miles a day. If you use the Volt that way and recharge it overnight, you may go weeks without the engine ever switching on. But if you need to take a road trip, you can do so without the fear of running out of juice. Volt owners who recharge regularly average almost 1,000 miles between visits to the gas station, which happen less than once a month.

Mounted under the load floor of every second-generation Chevrolet Volt is a charging adapter that connects the car to a standard 120-volt home outlet. Using this charging method, the battery takes between seven and 10 hours to top up a depleted battery. Level 2 charging is also available at public sites and can be installed in a user's garage or parking spot at home or work, with costs usually no higher than $2,000; this method cuts charging time to around four hours.

For 2017, the Volt added optional adaptive cruise control and automatic emergency braking to its roster of features. Changes for 2018 were limited mostly to a few new paint colors and the deletion of a formerly standard leather-wrapped steering wheel on LT models. For 2019, the Volt added a new 7.2-kwh charger to its options list.

The first Volt was new for the 2011 model year, and took home several major awards, including the North American Car of the Year award.

The first-generation Chevrolet Volt didn't change much over its five years, though its lithium-ion battery saw two small increases in capacity. Other than some trim changes, and the roof and tailgate now painted in body color rather than glossy black, the last Gen 1 Volt was pretty similar to the 2011 model that launched GM into the business of selling electric cars in volume.

When the first Volt started out with a fully charged battery, it could travel an EPA-rated 38 miles on electricity alone; once the battery was nearly exhausted, the gasoline-powered generator kicked in to recharge it, extending the driving range for another 300 miles or more. After that, occasional stops at a gas pump could extend the range even farther. The Volt's 38 miles of electric range was delivered by a lithium-ion battery pack located in the tunnel between the front seats and below the two rear seats. After the pack was depleted, the car seamlessly switched on its 1.4-liter gasoline engine, which generated electricity to power the electric motor that actually drove the front wheels. Those fundamentals haven't really changed in the second-generation Volt.

Over time Chevy's specs for the first Volt inched ahead. In 2013, Chevy slightly increased the energy capacity of the lithium-ion battery pack, from the original 16 kilowatt-hours to 16.5 kwh, and the usable portion of that energy from 10.3 to 10.8 kwh. That boosted the Volt's EPA-rated electric range from 35 to 38 miles, and it raised the 2013 Volt's efficiency rating from 94 to 98 MPGe, or "miles per gallon equivalent"—the distance the car can travel electrically on the amount of energy contained in a single gallon of gasoline. For 2015, the battery capacity rose again—though this time the ratings stayed the same.

The EPA assigned the first Volt a rating of 98 MPGe over a standard test cycle that blends both pure electric and range-extending gasoline modes.

GM took criticism for the Volt's unadventurous exterior styling, but the interior was seen as more modern, with an Apple-like feel to its glossy plastic control panel. Packaging in the first Volt was another area of concern for some: The Volt's lithium-ion battery pack sits in the tunnel between the seats and under the rear seat. The first Volt could hold four people and some luggage comfortably, but had less interior space than Chevy's similarly-sized Cruze compact four-door sedan.

The options list of the Volt gradually expanded over the years, although 2011 models came with a richer selection of standard equipment than did the 2012s. No sunroof was offered, and there were limited color and wheel options. A low-energy Bose audio system was available, along with a navigation system, leather upholstery, and a selection of interior graphic treatments and finishes.

Rate and Review your car for The Car Connection! Tell us your own ratings for a vehicle you own. Rate your car on Performance, Safety, Features and more.
Write a Review
2018 Chevrolet Volt 5-Door HB Premier

highly efficent car and smarter then me at times

The best feature is the fuel economy I average 4 gallons or less per month
people found this helpful.
Was this review helpful to you? Yes
2018 Chevrolet Volt 5-Door HB LT

Fun to drive and great value with tax incentives

So that's the first and most impressive thing to note: it has the longest EV range of any PHEV (53 miles, before the 300-400 more on gas), and it's the ONLY PHEV where the gas engine will NEVER come on unless a) you tell it to or b) you've completely drained the battery.

Quality is impressive. The car seems to have been machined from a single billet of titanium--it's a really stiff structure. The leather on the steering wheel and seats is excellent: a supple-yet-grippy high-quality hide. The Bose stereo sounds nice and it's a reasonably priced standalone option--you don't have to step up a trim level just to order it. The LED headlights are brilliant, literally. The infotainment system is flawless and quick, projecting your phone onto the dash touchscreen and integrating it into the radio, and responding to taps, swipes, and voice commands.

The seats are very comfortable in all but one respect: you can't tilt up the front of the bottom cushion for leg support. Also, it's hard to know where to rest your left foot: the wheel well puts the dead pedal pretty far back, so you'll want to stick your left foot under the brake pedal...not the safest idea.

I joke that this is the real reason they give us the regen-on-demand paddle on the steering wheel and the L mode on the shifter, which let you brake the car by pressing the paddle or lifting off the gas, respectively.

The car feels heavy for its size but well-balanced and glued to the ground. The ride is supple but sporty: honestly I wouldn't mind trading the ground-hugging short-travel suspension for something cushier, but it's not going to offend anyone. It is low, though, so plan on approaching driveways at an angle and stopping short of parking-stall bollards, or you may lose your rubber front spoiler.

Power and responsiveness are excellent, especially around town with Sport mode on, with a VERY quick 0-30 time of 2.5 seconds and a 0-60 time of 7.4. It doesn't lack for passing power either.

Although it's attractively styled inside and out, the hardest obstacle to overcome is that the Volt looks a little bit like a Cruze and yet it costs as much as a BMW. But lease deals and incentives are frequently available to make the car as cheap to lease or buy as a Prius.

It's hard to see out of: the A pillars are huge, the beltline is high, the hatchback glass is nearly horizontal. Optional safety packages compensate nicely for that with cameras and sensors and automatic whatnot, but you shouldn't have to drop another four figures to make your car safe to drive. Especially galling: You have to order every option, on the highest trim level, before Chevy will equip your car with adaptive cruise control.

The back seat lacks headroom, so despite large comfy cushions and adequate legroom, it's not for tall adults. But the cargo hold is plenty big. I've folded down the rear seats, stuck my legs under the hatchback area, and taken a nap in the car (curled up, of course).

There's no fast-charge provision...and even Level 2 charging is about half as fast per unit of battery as most pure electrics. Your "fast charger" is your gas tank! But you can fill the battery overnight even out of a regular wall outlet, so you start each day with a full battery.

There are a few too many bits of hard plastic for a car in this price class, and that cost cutting gets more obvious the further back in the cabin you go, with rock-hard rear door panels, a flimsy charger compartment door that literally falls off when opened (no hinges), and a cargo cover that's literally just a piece of stretchy fabric.

If it sounds like I'm really reaching to find anything to complain about, you're right. There's very little wrong with this car, and a lot right about it.
+ More »
people found this helpful.
Was this review helpful to you? Yes
See More Reviews