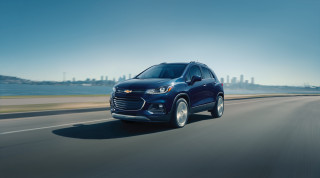 The Chevrolet Trax is for all intents and purposes a tall hatchback—or a short wagon—with available all-wheel drive. However in the car-shopping language of the day, you might hear it called a crossover.

The Trax was originally part of an expansion of Chevy's utility-vehicle lineup in 2015. It was updated for the 2017 model year with updated looks, a new interior, and better safety gear—although some of that gear was dropped for 2021 with the discontinuation of the top Premier trim.

Each of the rivals you might consider next to the Trax are quite different; the long list of possibilities includes the Subaru Crosstrek, Nissan Kicks, and Honda HR-V.

The Trax is a close relative of the Buick Encore. The two share drivetrains, architecture and safety systems, but the Buick has more expressive styling and more standard features to appeal to buyers willing to spend a bit more.

Although primarily a transplant from GM's operations in South Korea—formerly Daewoo—the Trax fits right in with the rest of the Chevrolet small-car lineup, with a rather tall hoodline and blunt snout, showcasing the Chevrolet dual-port grille and bowtie design. That tall nose meets a body that otherwise looks like an elevated hatchback, with some body-side sculpting helping to avoid too much of a slab-sided look. Yet faux skid plates and rubberized wheel-well liners hint at a more rugged side that really isn't there.

For 2017, the front fascia, grille, and headlights take on the look of recent vehicles, such as the Cruze, Volt, and Malibu. The rear fascia is new, too, and LED signature lighting and taillights are available on higher-end models. However, the base model still has budget-grade black door-mirror pedestals, and it lacks roof rails and some chrome trim. Inside, the instrument panel and dashboard have been redesigned for 2017, trading a motorcycle-style instrument display with digital readouts for a more flowing dashboard design with analog gauges, extra bits of chrome trim, and available dashboard contrast stitching.

Surprisingly, the Trax benefits from some of the so-called Quiet Tuning that went into making the Encore a bit more refined than your average small crossover SUV. Among these measures are thicker window glass and added sound deadening in the dash.

Five seating positions are available, and four adults can fit comfortably in the Trax. It also has hatchback/crossover versatility. In back, you get 60/40-split folding seats that lay flat, and even the front passenger seat will fold flat to accommodate longer items. Cargo space expands from 18.7 cubic feet with the rear seatbacks up, to 48.4 cubic feet with them folded forward, and there are plenty of cubbies for smaller items.

The Trax feels confident but not lively or particularly fun in its handling. Suspension underpinnings are pretty typical for this type of vehicle. A column-mounted electric power steering unit provides maneuverability and responsiveness.

For the U.S. market, the Trax includes 10 standard airbags and a rearview camera system, as well as an electronic stability control system with rollover mitigation, electronic brake force distribution, and brake assist. For 2017, it is available with blind-spot monitors, rear cross-traffic alerts, forward-collision alerts, and lane-departure warnings.

The Trax has received a top five-star overall rating from the NHTSA, and earns good scores from the IIHS.

The Trax was originally offered with LS, LT, and LTZ models, but for 2017 the LTZ gave way to the Premier. All models come with OnStar telematics services and MyLink connectivity, which includes a 7.0-inch touchscreen, a USB port, and SiriusXM satellite radio services.

MyLink is compatible with Siri Eyes Free, and for 2017 it added Apple CarPlay and Android Auto. Chevrolet’s OnStar 4G LTE embedded vehicle data system is also offered in the Trax, potentially turning the vehicle into a wi-fi hotspot when needed.

Although the Trax hasn't received significant changes since its 2017 injection of new features and tech, the Premier model was dropped for 2021, leaving it devoid of some of the top active-safety features, as well as the power moonroof and Bose premium audio.

Rate and Review your car for The Car Connection! Tell us your own ratings for a vehicle you own. Rate your car on Performance, Safety, Features and more.
Write a Review
2018 Chevrolet Trax AWD 4-Door LT

The is the car is nice and has a lot of features like phone apps connection, OnStar, Rear Camera, etc.., but the car is mission sunroof and alarm sound as was available on Trax 2015 LT.
people found this helpful.
Was this review helpful to you? Yes
For 2017 Chevrolet Trax

The best SUV crossover on the market.

Excellent choice I made from an Equinox to this, no mistake.