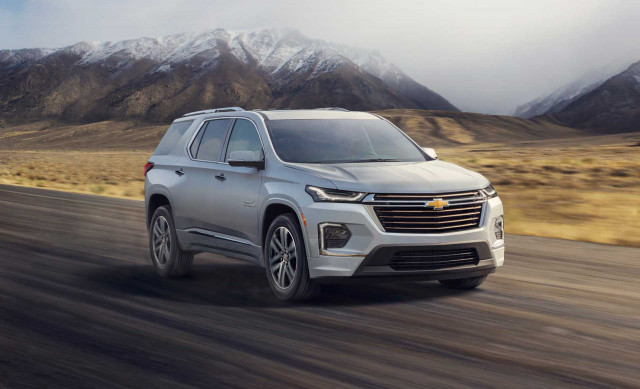 The Chevrolet Traverse is a full-size crossover SUV that prioritizes ride comfort compared to the Tahoe. For families who can't live with sliding doors, the Traverse is the un-minivan, minivan.

With the Traverse, Chevy has rivals for mega-selling SUVs that include Honda's Pilot, the Nissan Pathfinder, and the Buick Enclave, as well as the  VW Atlas and the Toyota Highlander.

For 2018, Chevrolet redesigned the Traverse for the first time in nearly a decade. It's slightly larger than its predecessor, with all of that extra girth going toward interior space. Its looks are both a little more angular and a little more SUV-like. From a distance, it could almost be a Chevrolet Tahoe but the two are wholly unrelated vehicles. Where the Tahoe is a traditional body-on-frame SUV with a relatively low-tech suspension that's designed for towing and hauling, the Traverse features a unibody design and a car-like suspension. Even though it's a couple of inches longer than the old model, it hides its extra size well.

Inside, the Traverse features some updated safety and convenience tech, plus improved cargo and passenger room. A new High Country trim level arrived for 2018 as the range-topping model with its own styling touches and more premium features.

Under the new Traverse's hood sits a more powerful 3.6-liter V-6 that now puts out 310 horsepower. A new 9-speed automatic is the only gearbox on offer, but buyers again have a choice of front- or all-wheel drive.

For 2022, Chevy dropped the base Traverse L trim and made automatic emergency braking and wireless Apple CarPlay and Android Auto standard. A light refresh brought reshaped headlights and taillights that did little to change the Traverse’s pleasant but anonymous style.

The Chevy Traverse entered the automaker's lineup for the 2009 model year. At the time, it was engineered as a replacement for both the Chevy minivan at the time, the Uplander, and the mid-size TrailBlazer sport-utility vehicle. Since then, it's become a perennial bestseller for Chevy, in a niche somewhere between the five-passenger Equinox crossover and the big Tahoe and Suburban truck-based utility vehicles.

The first versions of the Traverse were powered by a competent 3.6-liter V-6 with direct injection. Models equipped with a dual exhaust put out 288 horsepower and 270 pound-feet of torque, while single-exhaust Traverses make do with 281 hp and 266 lb-ft. The engine offers good low-end torque, making 90 percent of the peak number available from 2,500 to 6,000 rpm. Acceleration was solid, and the Traverse is even a good option for those with occasional towing needs.

The powertrain also affords it good fuel economy and performance. Despite weighing around 5,000 pounds, the Chevrolet Traverse achieved fuel economy of 15 mpg city, 22 highway, 18 combined in front-wheel-drive guise—much better than the more truck-like TrailBlazer it succeeded. All-wheel-drive versions fare slightly worse, achieving ratings of 15/22/17 mpg, according to the EPA. The impressive figures (for such a big vehicle) are helped by the Traverse's 6-speed automatic transmission. Upshifts are very smooth, although the transmission can hesitate when called upon to downshift.

There's seating for up to eight in the three-row Traverse; second-row captain’s chairs are also available, which reduce carrying capacity to seven. The Chevrolet Traverse is also one of the safer vehicles in its class, scoring well in independent crash testing and in NHTSA crash tests as well. It's one of very few models to offer an airbag between the front two occupants.

The Chevrolet Traverse was available in three trims—LS, LT, and Premier—as well as front- and all-wheel-drive configurations. All models have four-wheel independent suspension and StabiliTrak stability control, as well as wheel sizes measuring 17, 18, or 20 inches. Some of the vehicle’s options include a rearview camera, a power liftgate, a DVD player and XM Satellite Radio, plus heated and cooled front seats. Higher trims can also be fitted with a rear spoiler, 20-inch aluminum wheels, a dual-exhaust system, perforated leather, and a panoramic sunroof.

The 2013 Chevrolet Traverse was given a refreshed appearance, with a new front end more like the one on the Malibu sedan, as well as taillights similar to those on the Camaro. Also new to the Traverse lineup was the Chevrolet MyLink system, which includes a 6.5-inch touchscreen, smartphone integration and easy streaming—with a smartphone and data plan—of Pandora and Stitcher smartphone-based entertainment.

More brightwork was used on the outside, and interior materials were significantly improved, but other than that the design was mostly unchanged. The powertrain got some new programming, although the V-6 and 6-speed automatic remain mechanically the same. Blind-spot monitors and rear cross-traffic alerts were included on the LTZ; and the front center airbag was made standard on all models.

For 2015, Chevy altered the Traverse's 18-inch wheel design, added Siri Eyes Free functionality to the infotainment system, and changed some exterior colors. A new interior color combination was also added to the list of available treatments. Few changes were made for the 2016 and 2017 model years as Chevy prepared to replace the Traverse with a new crossover for the 2018 model year.

Rate and Review your car for The Car Connection! Tell us your own ratings for a vehicle you own. Rate your car on Performance, Safety, Features and more.
Write a Review
2018 Chevrolet Traverse AWD 4-Door Premier w/1LZ