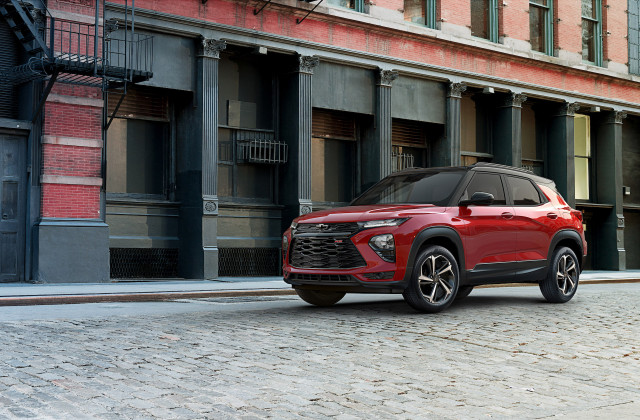 The Chevrolet Trailblazer is a name that's applied to various crossovers and SUVs throughout its history, most recently a small crossover sized between the Chevy Trax and Equinox.

The new Trailblazer will be a compact crossover sized between the pint-size Trax and comparatively larger Equinox. It shares many styling elements from the Blazer, which is a 'tweener between the Equinox and Traverse itself.

Chevy didn't say what would power the Trailblazer but it's likely to share an engine with the Buick Encore GX, with which it shares similar components.

The Trailblazer will be Chevy's first crossover with standard automatic emergency braking and active lane control throughout the lineup.

The Chevrolet TrailBlazer was a mid-size sport utility vehicle sold from 2002 through 2008, built on a body-on-frame truck platform that spawned similar vehicles for most of GM's other brands. Those included the GMC Envoy, Buick Rainier, Oldsmobile Bravada (briefly, until the Oldsmobile brand was killed off), the Isuzu Ascender, and even the Saab 9-7X, the only truck-based and U.S.-built model ever sold by the now-defunct Swedish import brand.

The TrailBlazer was replaced in the Chevrolet lineup in 2009 by the Traverse crossover utility wagon, which offered more car-like ride and handling and more interior space due to its unibody construction. Similarly, the Buick and GMC versions of the same vehicle were replaced by the Enclave and Acadia, respectively.

The TrailBlazer name actually started as an upscale trim level on the prior generation of Chevy Blazer mid-size utilities, but became its own model with the 2002 introduction of a new vehicle. Its truck heritage was evident in its solid rear axle, and the choice of either a 273-horsepower 4.2-liter inline-6 or a 302-hp 5.3-liter "small block" Chevy V-8, both engines mated to a 4-speed automatic transmission. The large engines and heavy structure produced low fuel-efficiency ratings, with the highest combined fuel economy rating for any version of the TrailBlazer being 16 mpg.

An optional four-wheel-drive system provided both automatic engagement and manually selectable settings for high and low ranges. A detachable trailer hitch was standard on the TrailBlazer, and three trim levels were offered: base LS, mid-level LT, and top-of-the-line LTZ, which included disc brakes, alloy wheels, a more luxurious interior with leather upholstery, a premium Bose sound system. The styling of the Chevy TrailBlazer was lightly upgraded for 2006 on the LT models and up, with a new grille and front fascia and some minor interior trim changes.

The TrailBlazer SS, a performance model, was introduced in 2006 with the same 391-hp 6.0-liter V-8 used in that year's Corvette sports car, though with some tuning changes. It wore 20-inch alloy wheels on lowered suspension, and could be ordered with rear-wheel drive or an all-wheel-drive system unique to that trim package. Another version was the TrailBlazer EXT, which had a longer wheelbase to permit a third row of seats. This model was sold only from 2002 through 2006; it was canceled when GM closed the plant in which it was assembled.

The TrailBlazer name was reintroduced for a 2013 sport-utility based on the new Colorado pickup truck, but that vehicle was not sold in North America.

Rate and Review your car for The Car Connection! Tell us your own ratings for a vehicle you own. Rate your car on Performance, Safety, Features and more.
Write a Review
2009 Chevrolet TrailBlazer 2WD 4-Door LT w/3LT

Fun SUV for me to drive!! It is the perfect size, seats adjust well and the use of all the mirrors are perfect!

I HOPE YOU READ THIS "2008 Trialblazer" WARNING

YOU BEEN WARN + More »
people found this helpful.
Was this review helpful to you? Yes
2006 Chevrolet TrailBlazer 4-Door 4WD LT

The miles are showing, and have been for a while

Sorry, Climbing down from my soap box. Reliability has been the bug with the Trailblazer since I bought it. I bought it 5 years ago with only 65,000 miles. Now, in 2015, it has 156,000 miles. I have replaced the Radiator, the entire gauge cluster, fuel pump and sending unit, Serpentine Belt, Idler Pulley, Tension pulley, Upper and lower Tie Rod Ends, Both front Hub assembly's All for brake Rotors twice, Pads as well, Spark Plugs, Water pump and the resonator fell off! I realize some of those would be considered normal wear by some, but common. I am old enough to have had several other vehicles and held them all to 150,000 miles or better without replacing anything other then oil, tires and windshield wipers. I don't go off road or tow, it commutes 70 miles round trip 5 days a week and averages a whopping 18 MPG. The MPG, I'll give it since the beast weighs over two ton. Anyway, lets just say Chevy/GMC is going to have to go a long weigh to earn any more business from me.

In case you think I got a lemon; I stopped at my local Chevy dealership for the gauge cluster and the parts guy was talking on the phone. He looks up and says, "what can I do for you" I ask the price of replacing the gauge cluster and he says $300.00. Didn't look it up on the computer, consulted no book or another counter guy, and went back to the phone without missing a beat. I'm thinking mine was not the first to need the gauges replaced. + More »
people found this helpful.
Was this review helpful to you? Yes
See More Reviews