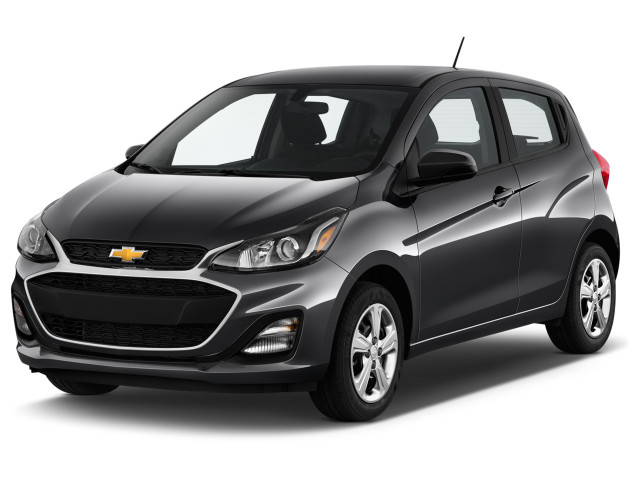 The Chevrolet Spark is a subcompact hatchback that's also the smallest car available from General Motors.

With the Spark, Chevy has a city car to rival vehicles like the Mitsubishi Mirage, Nissan Versa, and Toyota Yaris. It sets itself apart by its ability to hold four adults, sitting comfortably if not spaciously, inside an extremely small footprint.

Chevy sold both gas- and electric-powered Sparks through the 2016 model year. The automaker redesigned the Spark for 2016, but the electric version dropped out of the lineup after the arrival of the Bolt EV.

The second generation of Chevy Spark went on sale early in 2016, and continued essentially unchanged for 2017. Its design uses more grown-up styling without the previous model's cartoonish characteristics. It has a more powerful, 98-horsepower, 1.4-liter 4-cylinder engine, giving it 16 percent more power than the 84-horsepower, 1.2-liter inline-4 used in 2013-2015 Sparks.

As before, the engine drives the front wheels through either a 5-speed manual or a continuously variable transmission. Its combined 2016 fuel-economy rating of 35 mpg took a hit for 2017 due to new EPA calculations that brought it down to 33 mpg combined, where it remains.

New camera-based safety systems, rarely found on cars this small, are offered as an option on the top trim level, and include lane-departure warning and forward-collision warnings.

There's also a "Spark Activ" package that adds trim items and raises the car slightly to make it resemble a tiny crossover. The powertrain is unchanged, without all-wheel drive an option, but the taller stance, different wheels, body cladding, and tougher grille do change the appearance. Changes for 2018 amounted to a new paint color, and 2019 saw a facelift that Chevrolet applied to several cars. The 2020 changes were also minimal, and the same applies for 2021 with just two new paint colors. It's not expected that Chevy will carry the Spark much longer after the 2021 model year.

The Spark has always been one of the smallest cars on sale with four doors, which helped distinguish the first generation (sold in 2013 through 2015) from other extra-compacts like the Scion iQ and Smart ForTwo. A minimalist's car with modern amenities, its shape looked cheerfully designed; inside, the dashboard was simple, with a large speedometer flanked by a digital gauge with extra information.

The first Spark was small. The next-largest General Motors vehicle sold in the U.S., the Chevy Sonic, was more than a foot longer than the Spark. But as the only five-door in its size category, the Spark won the practicality war against cars like the Fiat 500 and Mini three-door hardtop. (The slightly larger Mitsubishi Mirage five-door was a competitor as well, but it's always sat somewhere between the minicar and subcompact.)

The Spark was also taller than its main competitors, giving both driver and passenger a better view out, which aided visibility when ensconced in a sea of SUVs. It was much easier to get people and things in and out of the back seat with the Spark's extra doors, even if the interior was just about as tight as in those rival models. Four adults could fit inside, but elbow room was tight.

Chevy offered the gas-powered Spark in three trim levels, starting at about $13,000. All Sparks came standard with a version of the Chevrolet MyLink connectivity system, offering apps for Pandora internet radio and Stitcher Smart Radio.

Chevy made one important change after the Spark's first year on the market. In 2013 only, a 4-speed automatic was available for an extra $925; that transmission was slow-reacting and didn't do the small car many favors. From 2014 on, however, the two-pedal option was a CVT, which was a better match for the car. The standard 5-speed manual made for the most fun in a Spark, however, and also required no added investment.

Chevy also offered an electric version of the first-generation Spark (get it?) in California and Oregon only. Known as the Spark EV, it sold only in small quantities.

The Chevy Spark EV was what our sister site, Green Car Reports, calls a "compliance car," which is an electric car built to satisfy coming California clear-air regulations that require automakers to sell battery-powered electric cars to continue doing business in the state. That means that while you may have seen a disproportionate volume of media and advertising on the all-electric Spark, it didn't warrant a great deal of attention. It was by far the most powerful Spark, and its lack of a transmission delivered the electric power in one single rush of acceleration. Chevy only sold about 100 cars per month.

Rate and Review your car for The Car Connection! Tell us your own ratings for a vehicle you own. Rate your car on Performance, Safety, Features and more.
Write a Review
For 2017 Chevrolet Spark

It's my Fred Flintstone Car

I love my car- it is fun to drive, small easy to park, great on gas mileage. I only drive it around town-
people found this helpful.
Was this review helpful to you? Yes
See More Reviews