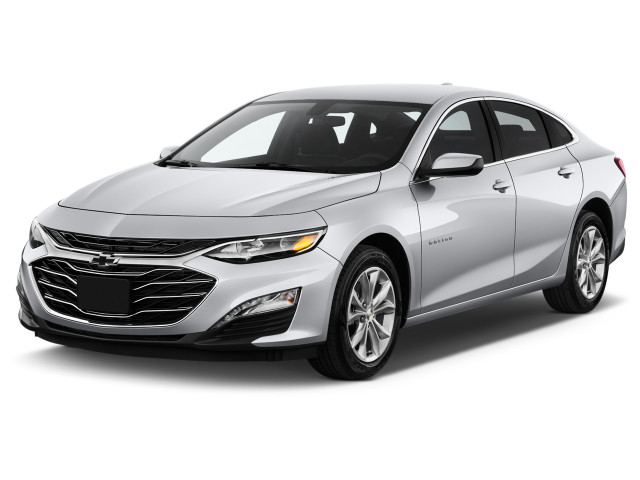 The Chevrolet Malibu is a popular mid-size sedan, although the name has applied to many other cars before the current model.

Chevy has used the Malibu name for some awe-inspiring land yachts since the 1960s. The modern interpretation is a mid-size stalwart with a decidedly less thirsty approach to fuel consumption—thanks, turbochargers—and touchscreens.

It competes in the savage race for mid-size money with the Honda Accord, Toyota Camry, Nissan Altima, and Hyundai Sonata—just to name a few.

For 2019, Chevy swapped in a new transmission for the Malibu's base engine, added an RS trim level, and revised its styling. Changes were minimal for the 2020 model year, but the Hybrid version was dropped.

Chevrolet introduced a new Malibu for the 2016 model year. It wears much more dramatic styling and sits atop a wheelbase that's been stretched by 4 inches compared to the current model, which itself was shorter than its predecessor, something customers apparently didn't appreciate.

Standard models have a choice of turbo-4s, with a 1.5-liter for base models and a 2.0-liter available as an option. The 1.5-liter earns a 37-mpg combined rating. Despite the size increase, Chevy claims a weight loss of about 300 pounds on comparable models.

There's also a new Malibu Hybrid, this time with a system that goes beyond the mild-hybrid setups offered in years past. The new system is essentially based on the battery and motor set from the 2016 Chevrolet Volt. The EPA pegs fuel economy at 47 mpg city, 46 highway, 46 combined for its most efficient Malibu, which beats the ratings of the rest of the mid-size hybrids.

In its latest form, the Malibu was a finalist for the 2016 North American Car of the Year. It's handsome inside and out, and while it isn't a scorching performer, it’s nimble, confident, and responsive in all of its variants. The cabin is spacious and serene—and far more passenger-friendly than the previous model. And with a host of new features, including everything from blind-spot monitors to Apple CarPlay, the new Malibu offers a lot of value for the money.

For 2017, Chevrolet swapped in a 9-speed automatic for its top 2.0-liter turbo-4 engine, but base models make do with a 6-speed. A Teen Driver feature was added to notify parents of over-eager children—or perhaps valet drivers.

The Malibu's 6-speed automatic in base models went away in the 2019 model year, replaced by a continuously variable transmisison. A Malibu RS donned a more sporty look but received no mechanical changes.

Chevy has sold a vehicle named Malibu since the 1960s, but it's evolved over time as tastes changed, from the V-8 and rear-drive Malibus of the 1960s and 1970s gave way to the downsized cars of the 1990s.

In 1997, the first modern Malibu was introduced. A replacement for the Chevy Corsica sedan, this Malibu was a smaller sedan than the most recent vehicle to wear the badge. It also was engineered around a front-wheel-drive architecture.

The 1997 Malibu was, by all measures, a bland car. Powered by an economical 150-hp, 2.4-liter 4-cylinder engine (a version of GM's much-maligned Quad Four) or 155-hp (later 170-hp), 3.1-liter V-6 (it felt much stronger, actually), the Malibu was only offered with a cushy suspension and 4-speed automatic—and its interior, though it had the comfort basics covered, was drab and dull. Chevy dropped the 4-cylinder engine completely in 2000.

The Malibu got a much-deserved full redesign for 2004. Built on a new global platform, the 2004-2008 Malibu was a bit more refined, handled better, and had a far nicer interior, though it still felt too plasticky on the cheaper trims. The Malibu was a half-step smaller than mid-size entries like the Toyota Camry and Honda Accord, yet its interior was surprisingly roomy and comfortable. Its powertrain lineup consisted of a nice, fuel-efficient 144-horsepower Ecotec 4-cylinder (with a manual gearbox possible), or a V-6 option. That 201-hp, 3.5-liter V-6 was a little disappointing, saved only by its prodigious torque. A 4-speed automatic was the only transmission, and the combination just didn't feel very refined.

Within this generation only, Chevy offered a hatchback version of the Malibu. It carried the odd name of Malibu Maxx and featured a longer roof and not-quite-wagon shape. While it wasn't terribly sporty, it was originally offered only with the larger engine, a 3.6-liter V-6. Chevy also added an SS variant of the Maxx later in its lifecycle, featuring a 3.9-liter, 240-hp V-6 that was pretty thirsty and not terribly thrilling.

The Malibu boredom was remedied for 2008, when GM completely redesigned the model, making it much longer to better match mid-size rivals. GM also gave it an interior and backseat space that outclassed many sedans its size. The interior wore vastly upgraded materials, and a design that was a clear step better than the layout of the former rental-car favorite. Powertrains included a 169-hp, 2.4-liter version of the Ecotec 4-cylinder engine and a 252-hp, DOHC 3.6-liter V-6, a version of the engine previously used in the Cadillac CTS and SRX, among others.

For a short time, a mild-hybrid version of the 2009 Malibu was offered; it offered very slightly improved fuel economy over the 4-cylinder versions and it failed to catch on. It was discontinued after a very short production run.

The Malibu that's on the way out after 2015 was just introduced for 2013. That car made a bit of an about-face, to focus more on efficiency in packaging, and in fuel efficiency. Chevy chose to make it smaller than its predecessor—it was about 4.5 inches shorter in wheelbase than its predecessor—in order to make room for a new Impala that was launched for the 2014 model year.

Though smaller on the inside, the Malibu boasted advanced safety tech and new infotainment features that are big improvements over the car it replaced.

A new trio of drivetrains was launched with the latest Malibu, making it a 4-cylinder-only car, like the Hyundai Sonata and Ford Fusion. In 2013, the base engine was a 197-hp, 2.5-liter inline-4, but the first model to launch was the 2013 Chevrolet Malibu Eco. That high-MPG model teamed a 2.4-liter inline-4 with a 6-speed automatic and eAssist technology that uses an electric motor and a small lithium-ion battery pack to provide engine stop-start and electric assist for the gasoline engine. Active aero shutters and regenerative braking added up to better fuel economy of 37 mpg highway. At the top of the lineup was a turbocharged 4-cylinder with 259 hp, good for a 0-60-mph time of 6.3 seconds, according to Chevy, and a higher grade of trim, including standard 18-inch wheels.

Eight airbags, including knee airbags, were standard on this Malibu, and rear side airbags were an option. Bluetooth and a rearview camera were available, as were a forward collision alert system, and a lane-departure warning system. The Malibu offered navigation and smartphone connectivity that allowed streaming of Bluetooth audio and feeds from Stitcher and Facebook.

GM attempted to address several shortcomings of the relatively new Malibu for the 2014 model year. The car was given a mild exterior refresh, with a new grille, headlights, and taillights. Inside, the rear seat was reshaped to increase room for adults. The suspension was also retuned with the goal of supplying better ride control.

For 2015, Chevy further refined the Malibu's powertrain options. The Eco model was no longer offered, while the turbocharged 2.0-liter was reprogrammed to produce more torque. With the figure rising to 295 lb-ft, the Malibu was capable of a 0-60 time of about six seconds. The Malibu also offered a high-speed data connection through AT&T's 4G LTE network, which also allowed owners to set up an in-car wi-fi network for mobile devices.

Rate and Review your car for The Car Connection! Tell us your own ratings for a vehicle you own. Rate your car on Performance, Safety, Features and more.
Write a Review
2017 Chevrolet Malibu 4-Door Sedan Premier w/2LZ

WISH WE HAD AUTO BRAKING

GREAT WENT TO ALABAMA GREAT MPG ,MUSIC WAS EASY ,NO PROBLEMS. THE DAMONS
people found this helpful.
Was this review helpful to you? Yes
2017 Chevrolet Malibu 4-Door Sedan Hybrid w/1HY

The cars are junk. I have had nothing but trouble with this car. Trans went bad, brakes don't last , door locks don't work.
people found this helpful.
Was this review helpful to you? Yes
See More Reviews